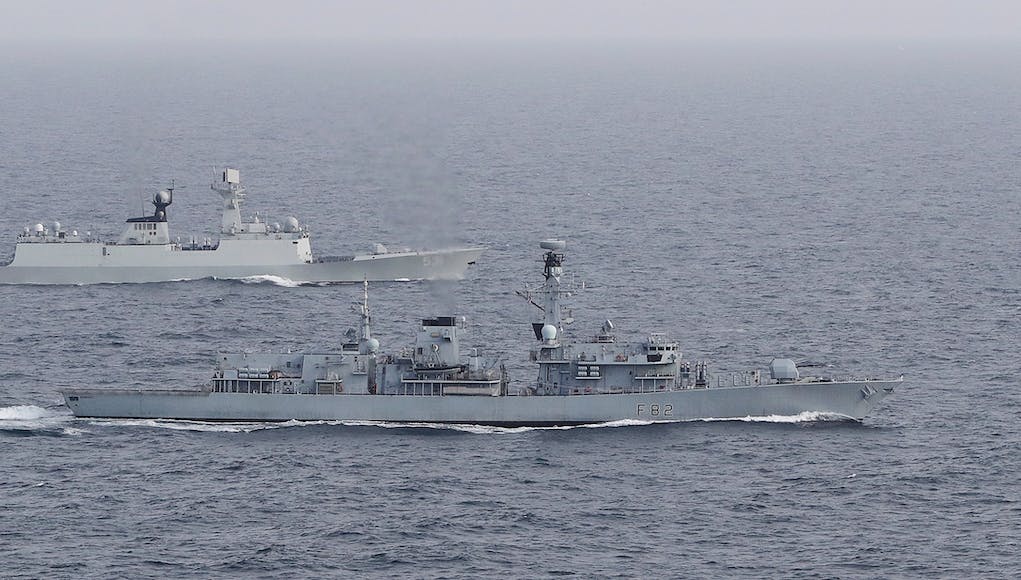 HMS Somerset has met and escorted the Chinese warship Xiangtan as she passes through the English channel on her way to the North Sea.

The Type 054A frigate Xiangtan is a multi-role frigate. As of 2016, 22 of the class are in service. The vessel is a development of the Type 054 frigate, using the same hull but with improved sensors and weapons.

The Type 054A was first revealed while under construction at the Guangzhou-based Huangpu Shipyard in 2005. The class somewhat resemble the French La Fayette-class frigates in shape and displacement. In addition, the Chinese reportedly used French, or French-derived, electronics and weapons.

According to BFBS, “HMS Somerset established constructive communications with the Xiangtan after she entered the Channel from the Atlantic on Wednesday, and on request the Plymouth-based frigate provided the ship with a weather forecast.”

“The UK enjoys positive relations with China and the Royal Navy has once again provided a secure escort around our shores. The UK strongly supports the right of all States to exercise freedom of navigation in accordance with international law.”

“This was the second Chinese naval group to enter the Channel within the last eight months and duties of this type are routinely conducted on passing warships from non-NATO navies.

It signals the Royal Navy’s readiness to provide security at sea while being minded to promote friendly partnerships with others.”

The encounter comes after a delegation from China visited Britannia Royal Naval College, Dartmouth in April.

Probably just my lack of knowledge in the area but the Chinese frigate looks more advanced than ours. Is that actually the case?

Well they are of a newer design so they reflect more modern views on stealth outer shape. The combat systems and weapons are of course more relevant in any discussion of how advanced they are in reality and their associated combat effectiveness.

Ours is 29 years old and theirs is 1. That’s the difference in age.

Ours are being replaced with https://www.google.co.uk/url?sa=t&source=web&rct=j&url=https://en.m.wikipedia.org/wiki/Global_Combat_Ship&ved=0ahUKEwjPkYugxK7NAhXmB8AKHVigDxUQFggeMAE&usg=AFQjCNF6fL0h5GVmGwXzjMH9IF0tnw3t2A&sig2=wIvqpxicURV0wGTIEgo7fg

They can keep jersey 🙂

The Type 23 has been upgraded in that timescale, and the gap in capability may not be as big as it first seems, there is also the question of how capable Chinese equipment actually is…

I’m surprised the Chinese have the logistical support to deploy a ship this far away ? plus just wait for the type 26 to come out and show china who is boss

They will be able to dock anywhere on request if they need shelter or repairs, surprised there was no Oiler with it though. Where has she sailed from?

You could give the Royal Navy wooden ships. I’d still put my money on the royal navy ???

I guess it is the weapon systems that count rather than the ship itself anyway.

Henry Leggett It seems that somebody’s been reading the posts that this page puts out!

Type 23s are (gradually) going to be replaced in the next decade or so as I understand it.

Based on other Chinese military equipment, it will visually look impressive, but use very dated, poor engines, defense weaponry and technology.

It actually looks a fine FFG on paper.

In this case yes.
You wouldn’t send your Farrari to taxi the mothering law from the local to her destination would you?..
In this case also, gave us a look at the Chinese ship while they looked at our old ones..
What by the way have the same weapons systems (if deemed nessisary) as are new ships.
Just ain’t much to look at!

We usually escort foreign warships past our coast. Would you prefer a Chinese destroyer(?) running about the Channel un-escorted!?

No rather they stayed home

Ive been on that ship !!

Which one is best on technology

Ours do get modernised. They don’t just keep the original equipment. Also Chinese technology ? Probably won’t work during actual combat

Based on the report, they are missing the technological advancement of the internet, needing to ask our ship what the weather forecast was.

On a bright side, we actually had a frigate available this time and didn’t need to rely on a river class.

We don`t have FRE`s anymore?

come on, be a little more informative as to the class of the Chinese vessel or keep the same level of description for both parties.

Wouldn’t say the Chinese tech is poor! The reason it looks French is probably because they have hacked the French equivalent of BAE systems and copied their designs and upgraded them, much the same reason as they have advanced submarine capability and 5th generation fighter technology from hacking American/British defence firms! It’s probably armed with defensive and offensive weapon systems and advanced electronic warfare from their Russian friends

The French probably sold them the blueprints 🙂

I noticed how many comments allude to the low quality of Chinese products, even though the cost of Chinese vessels, tanks, aircraft are not that much different from western equipment. If anyone really thinks that the type of workers and the factories that build the new Chinese carriers, SSBNs, J-20 and J-31 stealth fighters, Z-10 and Z-19 attack helicopters, DF-21s, HQ-16/9/19/23 (various SAM and Anti Ballistic missile and Anti Satellite missiles) PL-15 AAMs etc etc really are the same type of people and factories that produce DVD’s and cuddly toys, then they should have a look at what the US… Read more »