A father and son were saved yesterday morning by HMS Westminster within minutes of their fishing vessel capsizing, say the Royal Navy.

The Royal Navy say in a news release that the frigate raced through the bay at top speed after receiving a mayday from the crew of the Ocean Echo which capsized in heavy seas about three miles off Portland Bill just before 8am. “As she arrived at the scene 15 minutes later after a five-mile dash, Westminster’s bridge team quickly spotted flares waved by the 40-year-old skipper and his 17-year-old son. The Portsmouth-based warship put one of her boats in the water to rescue them.

The crew of the boat – Leading Seaman Cameron Evans and Able Seamen Leah Mears and Kai Turner – found the Ocean Echo’s two sailors had taken to a life raft. The pair received a quick medical survey by the Westminster sailors, who decided their injuries meant they could be handed over to Weymouth RNLI lifeboat which arrived on the scene shortly after the warship.”

“This is exactly the sort of reactive incident that the Royal Navy is able to conduct at short notice. My ship’s company and I are always prepared to assist our fellow mariners when in difficulty and wish a speedy recovery to the affected fishermen and their families.”

The Portland race and dynamic seas off the ledge can kill you quick especially in bad sea states, one minute you think your safely navigating the inside passage the next the race has moved closer into the bill and you are in a whole world of buggered.

standing on the bill you many not think it but that is one challenging bit of sea for any small boat navigation. 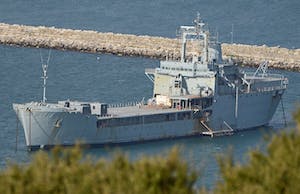