Typhoon jets were operating around Russian warship Vice-Admiral Kulakov off the west coast of the UK this week.

HMS Tyne, HMS Richmond and HMS Kent – combined to escort a group of Russian ships as they operated in the Celtic Sea and approaches to the South West coast of the UK.

HMS Northumberland also watched the movements of Udaloy-class destroyer, the Vice-Admiral Kulakov, as she sailed North West of the Outer Hebrides, off the west coast of Scotland. This task group were joined by RAF Typhoon and F-35s jets, plus tankers RFA Tideforce and RFA Tiderace, which kept the allied ships replenished throughout the operations and contributed to monitoring duties while in the Irish Sea.

“This is why the Royal Navy is at sea every day, protecting the UK and our interests. Even with the pressures of Covid, we remain at short notice to respond to threats both in home waters and around the world. Despite the increase in Russian activity, both on the surface and underwater, we are always ready to respond.”

“In very challenging conditions with rough weather, Severn and several other British and allied ships, have spent 20 days ensuring that Russian transiting warships remain under our watchful eyes.” 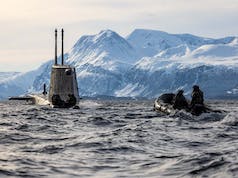 I’ll wager all done in a thoroughly professional manner too, unlike the crazy Russian bear!

There will be method in the madness.

The Bear may be underfunded and using old kit but idiots they are not.

It might be that they have to get close and crazy because of the limitations of the kit?

Yes and no I would say, cutting through some of the busiest civilian flight routes in the world with transponders turned off is extremely irresponsible (and childish) at best and a potential disaster in the skies at worst….. Crazy Ivan…..

I’m sure their old elint kit means they do have to get considerably closer to the sources though to acquire any useful intelligence.

Some of their Pilots do seem to like to Show Off a bit…… Not sure how effective they would be though.

And the crazy Chicoms!

Yes I know we are miles away from this but does anyone know what an RAF Typhoon would attack a ship with?

DM Paveway and Brimstone Rob, against a modern well equipped warship with layered defences though, it would be absolutely suicidal…..

Could they come in low? Then pop up to let loose some brimstone then get back down to the deck and away?

Interesting. In a crowded maritime zone against single target latest Brimstone may be up to the task. However, if the Kulakov cares to wait around for Spear 3 on an F35B, or at least come back in a couple of years, we could no doubt entertain her satisfactorily then.

Don’t forget Poseidon has an anti-ship missile capability. See attached video of an RAAF aircraft launching a Harpoon at RIMPAC 2018:

Assuming the RAF P-8A fleet is exactly the same configuration as RAAF and USN aircraft, then all the RAF needs is a stock of missiles.

Part of the agreement was to share the US munitions stockpiles located in the UK.

I’m assuming this was because of a long term goal to replace the US weapons with the UK ones in service on other platforms?

So does that mean the RAF has access to USN Harpoon missiles ‘if and when’ required? One would hope so.

The USN has a project running to expand the types of weapons that P-8A carries:

One of the weapons proposed is LRASM (which here in Oz the RAAF is planning to procure approx 200), would give the global Poseidon fleet a very capable and very long range AShM capability.

Will the RAF participate too?

Didnt know that. Phew so we can at least attack a hostile ship. Not sure harpoon would get through but the principle is there

The Typhoon could potentially carry 24 Brimstones, depending on the range to the target the aircraft needs to travel unrefueled. It would never use a Paveway unless the target was subdued, as the glide distance at height is about 7 miles. Even a toss attack would be bonkers as the aircraft would need to pop over the horizon at near supersonic speeds to transfer enough kinetic energy into the Paveway to lob it some distance. Brimstone is currently the only weapon that can be used “safely” against a moving target. If it was anchored they could use Storm Shadow. To… Read more »

It’s a worry that here we are, nearly 40 years on from the Exocet experience/lesson and we have no option.

Surely the lesson learnt in the Falklands was the need for more advanced ship-launched air defences? Something we have definitely improved upon.

I don’t disagree with the sentiment, and I really think we should have a common ASM that can be air launched and surface launched. But I would be surprised if there wasn’t an SSN also hanging around in the general vicinity of a Rusian Navy surface combattant sailing the Irish Sea and probably within weapons range of BAE’s submarine construction facility at Barrow. I don’t know, but it’s also possible that HMS Richmond and/or HMS Kent were carrying Harpoon cannisters. In this situation, I doubt a Typhoon would have been needed. Doesn’t mean we shouldn’t have one for the times… Read more »

Not sure about that, the Kulakovs SAMs have a maximum altitude of 20,000 feet. Could someone let me know how high a paveway can be dropped from? If it’s above that then a Typhoon could sink her with impunity.

Yep, you could drop a Paveway from higher than 20,000ft. But is the published data on the Kulakovs SAMs trustworthy?

Hopefully Daveyb, my understanding is that’s it’s basically the same missile as land based SAMs the performance of which is known. Ta for the info on Paveway.

Storm shadow can be updated in flight.

So if the ship was painted by another asset the re-targetting data can be updated dynamically.

I agree with Captain P below that it is a bit of a worry that we still don’t have our own full suite of sea skimmers to hand.

12 brimstone closing at supersonic soeed from 50km away would not be a pleasant experience for those onboard.

50km would be well in range of any vaguely modern missiles that the ship carries, the typhoon would be taken out well before it could launch its missiles.

Sorry… Typo. . Brimstone Ii is officially 60km+ from fixed wing. I assume the faster the fixed wing the greater the ‘+”‘… But your comment is well taken… And does put CAMM at 25km+ into perspective…. CAMM-ER for type 32 please

Failing all these, there is always the pilot’s emergency piss-bag 🙂

It makes me wonder if there are any Crated Sea Eagle Missiles Stashed Away somewhere just in case – and id bet that not all the Retired Tornados have been turned into Coke Cans yet.

The only Tornados that had the circuits and software to release sea eagle was the GR1b’s. You could maybe ballistic launch one, but it would have to lock-after-launch. Can’t remember if it could do that. Nice idea though. Always thought the MOD were seriously negligent in gapping the ASM capability. Strong words I know, but we are an island.

Do we still have any sea eagle missiles lying around? Just wondering if we had to air strike a hostile warship anytime soon what would we use?