RFA Wave Knight will support the US contribution to the international humanitarian response and serve as a landing pad for US military helicopters responding to the crisis in Haiti.

RFA Wave Knight is a Wave class tanker and part of the Royal Fleet Auxiliary, the civilian support branch of the Royal Navy, providing logistical and operational support to military operations.

“The UK Government has today (Thursday 19 August) announced a package of up to £1 million of initial support to Haiti, as the country recovers from the recent devastating earthquake. This is in addition to significant UK contributions to the UN Central Emergency Response Fund, the Red Cross Disaster Relief Emergency Fund and the Start Fund, which have allocated funding of £5.8 million, £600,000, and £250,000 respectively.”

Additionally, following a request for international assistance from the Haitian Government, the UK will send a team of medical experts and a UK humanitarian expert is deploying from the UN to provide support.

“Communities in the Caribbean can rely on the Royal Navy to come to their aid when disaster strikes. The Royal Navy has a proud history of supporting British Overseas Territories and other partners in the Caribbean during hurricane season. I’m proud that the UK can now play a part in the US effort to respond to the devastating earthquake in Haiti.”

“It is at times like this that the international community must come together to help those in crisis. The UK’s support will add to Haiti’s efforts to provide emergency disaster relief to those most vulnerable, including access to vital healthcare and sanitation.”

The Ministry of Defence say in a news release:

“Two British naval ships – RFA WAVE KNIGHT and HMS MEDWAY – are currently deployed to the Caribbean to provide humanitarian assistance and disaster relief. They have been deployed to the Caribbean since May 2021 to support British Overseas Territories and other partner nations the region throughout hurricane season. RFA WAVE KNIGHT arrived off the west coast of Haiti in the early hours of Wednesday (BST). It will allow US helicopters to refuel as they fly to and from the island, extending their range and time available to support the disaster relief efforts.”

You can’t help thinking these dirt poor people have been left to their own devices as Afghanistan has drowned out this appalling tragedy.

The US need to deploy in force with field hospitals, Chinooks and engineering teams……

At least we’re ‘there’ John, it might be going under the radar with regard to the media but the UK is doing its bit. Haiti really gets a regular kick in the spuds doesn’t it ??

It sure does Andy….

Agree Natural disaster over and Human one, should be doing more to support them

Off topic, but this is rather interesting

100 mile range…add in dog legs on the flight plan and, like Harpoon now, the fire point to target straight line range comes down considerably.
The remote operating nature of the truck does mean you don’t need to be near it when the counter fires are inbound.

Nice to see UK lending a hand in Haiti. But the real question is why does it have about 1/10 the GDP per capita as its neighbour the Dominican Republic? That seems be where the real problem lies. 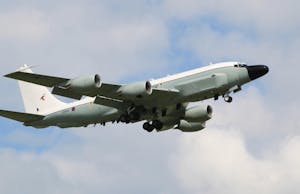