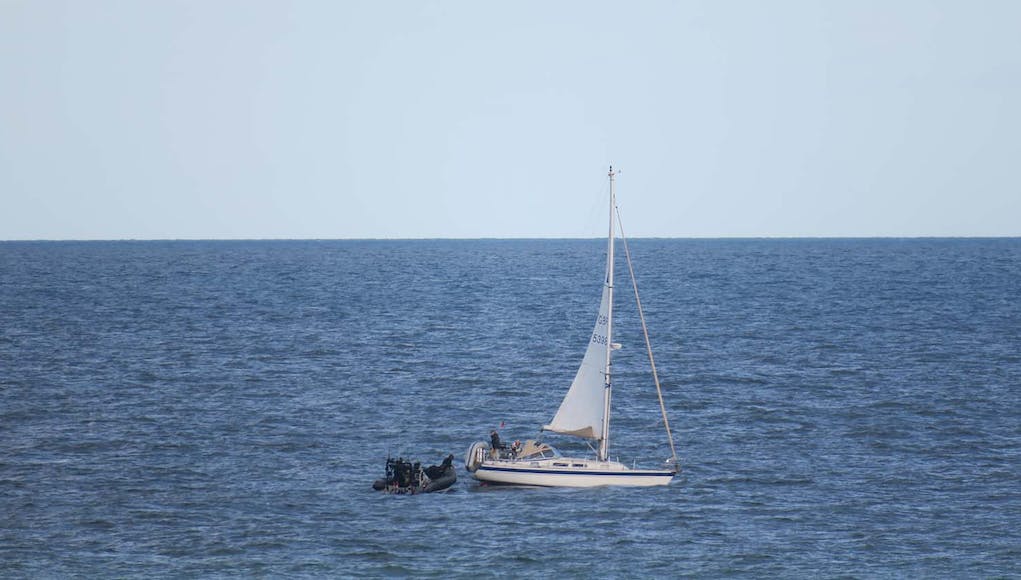 HMS Dragon helped a yacht when it was snared off a Dorset beauty spot, say the Royal Navy.

The Royal Navy say that two crew of the Weymouth-based Monteray sent out a distress call at 4.30pm on Saturday when a lobster pot wrapped around its propeller shaft off Lulworth Cove – and the boat was unable to move.

“Portsmouth-based HMS Dragon was in Weymouth Bay carrying out helicopter and board-and-search training ahead of deployment this autumn. Within 50 minutes of picking up the yacht’s distress call, the destroyer was on hand and one of her sea boats was racing across the bay to offer assistance.

Aboard was experienced marine engineer LET Charlie ‘Rigsy’ Rigelsford who succeeded in freeing the pot – but not without some difficulty. He found there was no way of getting the pot off the shaft and rudder from the stern of the craft. Instead he clambered down the stern ladder, into the water, and under the yacht to get the line and buoy which had snared the Monteray free.”

The warship waited around as the two yachtsmen tested their manoeuvrability and when satisfied the Monteray was no longer disabled, Dragon resumed her training.

St George slayed by the Dragon.

Hoorah. Finally a use for the Royal Navy as they put training into practice. https://ukdefencejournal.org.uk/hms-enterprise-takes-part-in-search-and-rescue-exercise/

Credit where credit is due! I’ll bet those guys were damned glad to see Dragon and have her crew sort out the problem. Well Done HMS Dragon!!