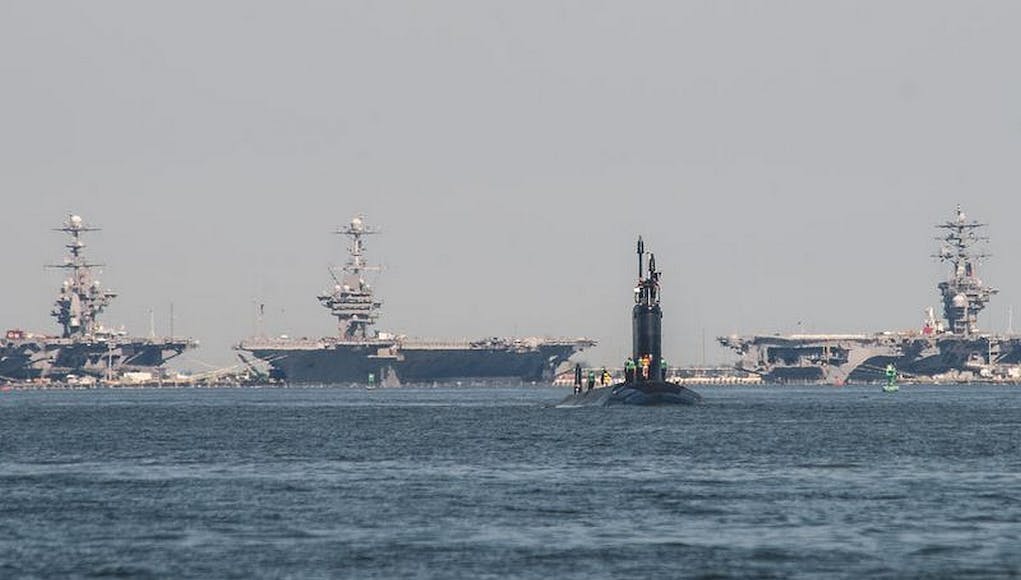 The submarine, in the final stages of construction, spent three days at sea proving all of its systems, components and compartments. Delaware submerged for the first time and performed high-speed maneuvers on the surface and underwater.

“Delaware performed well during sea trials, which is a testament to the skill and craftsmanship of the incredible team of shipbuilders who are working to uphold our high standards of quality,” said Dave Bolcar, Newport News’ vice president of submarine construction.

“We look forward to continuing our testing program to deliver the submarine to the U.S. Navy later this year.”

The submarine is scheduled to undergo a round of acceptance trials before it is delivered.

More than 10,000 shipbuilders from Newport News and teaming partner General Dynamics Electric Boat and thousands of companies across 48 states have participated in Delaware’s construction since the work began in September 2013, say the firm.

Yeah that’s all I was looking at. Must be a great place to visit when there a load in port, but I’ll settle for Portsmouth with our two carriers and a few destroyers.

Say that there were both carriers and a couple of destroyers were in port, whatd be the best vantage point in pompey to go and see them ?

Little question- if submarines are so overwhelmingly superior, why do we have carriers?
(yes, a stupid question I may already have asked, but thought I’d just ask anyway)

They engage enemy aircraft and provide area air defense as they did in the Falklands. They deliver significantly more ordnance against land targets than a submarine can.
Subs are still primarily anti ship assets with the ability to strike strategic land targets from distance.

BB85 did give a good short & sweet answer. However, what makes you think that subs are overwhelmingly superior? In what way?

Good points. I also agree that a balanced force is needed, including subs, carriers and assault type ships.

submarines are great for our nuclear weapons, they can be anywhere on earth (oceans) and not be found easily or atall, a great deterrent, I would like the RAF to get their tactical nukes back though. Anyway, and just the threat of an atack submarine can send a whole navy back to port they are great assets but so are aircraft carriers and cruisers.

It is about the 4 pillars for me Cam.

All else is secondary to the RN maintaining those capabilities.

Yeah mate I would agree with you on that, and we are great at most of that, working up on carriers again though, and the RM are getting back to their true commando naval role and getting away from the army like infantry role they have had recently.

The main point on subs not mentioned. In my opinion our SSN’s are the best weapon we have against other submarines.

That to me is their main role, and why we should have more of them over all other assets.

They carry out intelligence operations too, and the threat of one being in the area, even if it is not, is in itself the deterrent to most navies who would struggle to engage one.

Would a cheaper non nuclear submarine fit the RN these days Daniele?, we could build them far cheaper and they would only be a few thousand tons so far less crew and far cheaper to run.

With money tight and 1st rate assets so expensive probably not.

If we had them we would need a big increase in budget and personnel.

I would never favour a SSK over an SSN if it was one or the other.
SSN’s are operated by few navies, and are strategic assets.

SSK useful for sitting off shore as it is alleged they did in 82 off Argentina, and as Gunbuster recently mentioned off Iraq.

One of the RN’s trump cards.

To add my point of view, carriers are overt and can be used depending on the threat posture you need to portray, from port visits, to just being offshore/in the region, and as the threat escalates up to combat and offensive actions. If you know a carrier force is on its way it can de-escate situations by threat posture alone. Subs, best for anti-sub warfare, information and data gathering, surprise offensive actions and the concern of an enemy if they believe an SSN is nearby. That threat alone can dictate the enemies scheme of monouvre and actions, which negates his… Read more »

Remember the Falklands? After HMS Conquerer sank the Belgrano the Argentine fleet stayed dockside for the rest of the conflict. Nothing more scary for skimmers than the unseen threat of an attack sub nearby.

Yeah one sub can defeat a whole navy, mentally that is. And mentally is more powerful than people think.

An simple explanation could be a carrier is like a Samurai. The Samurai was about the overwhelming display of power. They were trained and equipped for war, so at a moments notice they could act. The submarine in this case could be likened to a ninja, sneaking around hunting their target and hiding in the shadows. Much like the tank the carrier is partially about overtly dominating an area. Its combat radius is dictated by its embarked aircraft and the weapons that they can carry. The submarine can do this covertly and can have either a positive or negative effect… Read more »