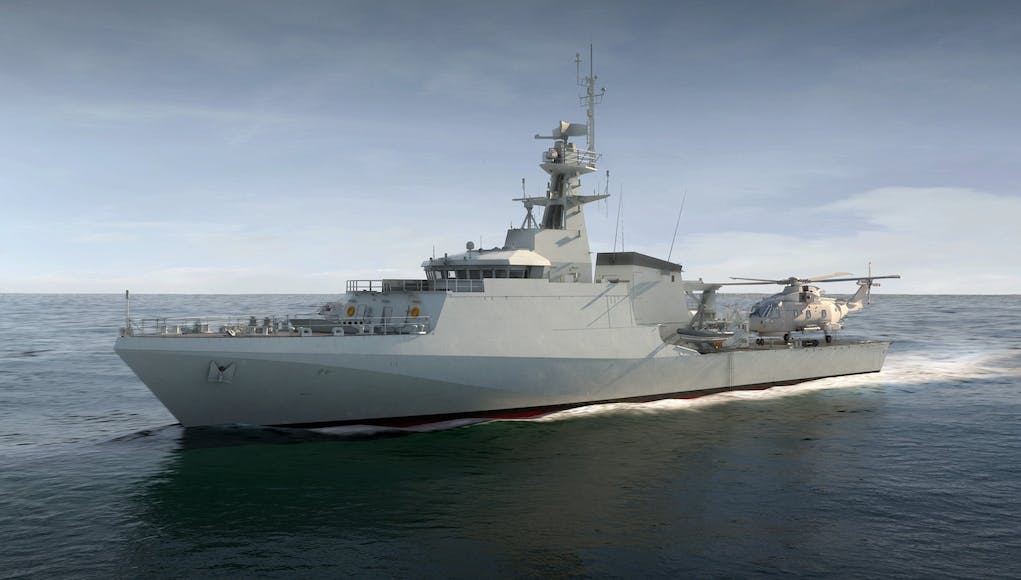 Work has officially started on HMS Spey, the fifth ship in a fleet of new Offshore Patrol Vessels being built on the Clyde for the Royal Navy.

HMS Spey will be built at Govan before she is transferred to the Scotstoun yard, where she will be fitted out for operations.

According to BAE, work to build HMS Spey and the rest of the OPV fleet is sustaining 800 jobs and the vital skills needed to build the fleet of Type 26 Frigates, which will begin construction at Govan in the summer.

The five new Offshore Patrol Vessels have been ordered to fill a gap in orders after the second carrier and before the Type 26 frigates begin construction. The first of the five new vessels, HMS Forth, is expected to be handed over to the Royal Navy this year.

“The start of work on HMS Spey, the fifth Offshore Patrol Vessel, is another milestone in a significant programme of work which is sustaining hundreds of jobs in Scotland and the vital shipbuilding skills needed to build the Royal Navy’s new Type 26 Frigates.”

“The team at Defence Equipment and Support has driven the successful delivery of the OPV programme; today’s steel cut is a proud moment not only for us, but for the Royal Navy and our industry partners too.

I am looking forward to continuing this long-standing and close relationship when we begin manufacturing for the Type 26 fleet later in the summer.”

Just another example of “wealth transfer” from the taxpayer to an otherwise unsustainable business.

Good to see the River 2 fleet being completed. Kudos to BAe, a milestone. Hope this news item marks the turn of the tide. The next announcement from them on the Clyde needs to be cutting steel on Type 26.

Good to see. I’ve seen the Forth around the Clyde, I like her. Just looking at marinetraffic and I see RFA Fort Rosalie moored up (23,000 tons, 22 knots, 2 × 20 mm GAM-BO1, 4 × 7.62 mm GPMGs didn’t realise they were armed at all), don’t think she was on the recent JW but I could be wrong. It’s something I’ve been trying to get my head around for Independent Scotland – what auxiliaries would we need? Supply / replenishment, oilers? Bearing in mind our first priority would be patrol and defence of our waters, and some availability for… Read more »

I think they work just fine for patrol. One each for Gibraltar, Falklands, Bahrain, Cyprus, Caribbean. Would Would like to keep batch 1s for UK EEZ. Given a whole new class of small boats not on the agenda for now & provided it didn’t affect Frigate orders, whilst we are still building them I’d be happy to order another 2 or 3 for humanitarian, training, weapons upgrades testing etc. Q. What sense thinking about opening a OPV base at Navy Reserve centre near Caliope?

Seems like a reasonable deployment to me, saving GPFF jobs. I’d like to see a couple of (extra perhaps) the Batch 2s kept though for UK waters to supplement the Batch 1s. Caliope is a good idea.

Two of these offshore patrol ships and a couple of armed trawlers should be enough for an independent Scotland.

Howrya Doin Dadsarmy! As i see it-2 basic options for Scotland. One-completely independent Armed Forces are realistically going to be fairly skinny. Given the SNP’s centre left make-up then inshore Patrol Craft,and maybe a couple of Frigates for the Navy will be all that is needed and affordable-like somewhere between New Zealand and the ROI. Air force-maybe a Squadron of Typhoons but then if you have to add in the need for Airborne Surveillance,Transport, In-flight refuelling etc then the problem is that these items the cost of which is spread over the whole of the UK ,become unaffordable! As with… Read more »

It’s where “shared defence” becomes something worth debating by defence minded people though I guess ultimately politicians would have the final say. That would be over and above what NATO would encourage.

Deployment on “foreign adventures” would still be under the respective governments but home defence could and I’d argue should, be a common need. Scotland would want control over our own foregin affairs though, to make and strengthen Scotland the Brand. Plus the little problem of EU / single market membership 🙂

I feel sure the RN is over joyed at the news and can’t wait to replace its existing young fleet of 4 OPV’s with 5 slightly newer when its frigate fleet is expected to last 30+ years before replacement. The MoD deserves congratulation on building the most expensive and pointless OPV’s conceived. It will be interesting to see what the Batch 1 River Class are sold off for? It’s enough to make you weep.

Sort of agree with you Mike but as pointed out elsewhere it does free up the ‘lonely 19’ to concentrate on their primary duties. I still think the new OPV’s should be upgraded weapons wise to enhance their value despite the apparent fear that they would be viewed as substitutes for the proposed 31’s and justify further cuts in their numbers

Sadly they are replacements, you can’t beat political waffle. The initial political sell, apart from the Type 26 delay, was that they could be deployed overseas in support of the ageing, failing frigate fleet and highly limited and unreliable Type 45 destroyer; Please refer last SDR and further MoD/RN planning. They will replace Batch 1’s in UK home waters and the Falklands, they are capable of little else regardless of spin. Had they been built to the Khareef design which includes a light helicopter hanger and with current weapons fit they could have been very useful. The RN is also… Read more »

Indeed-one has to say we get poor value for having the 2nd highest defence budget in NATO- also much of that budget is poorly spent. i would have thought that with the new Frigate we should have one basic hull that is flexible and adaptable to perform a variety of roles instead of the bits and pieces runs anticipated. It would have made far more sense to build say 15 new frigate hulls to create a decent run that could enable some economies of scale and then fit them out according to their primary roles-even allow a few built for… Read more »

Agree, but the silver lining to this cloud is BAe ought to have used the OPV time to build a skilled workforce. I suspect the aweful truth might be that they were in no position to start building Type 26. Of course the price is a heck of an embarassment but the RN have something tantalisingly close to the MHPC concept that was mooted a while back. Could River 2 and RUB’s replace River 1, Hunt, Sandown and Echo class? If so they might turn out to be a bargain.

These ships need to be seen as supplementary to our frigate and destroyer fleet. By having ships in the water they free up frigates for other duties. They probably are a missed opportunity as a larger higher end corvette would have been more useful to the navy. Something with a 76mm or 114mm gun, sea ceptor vl system, hangar for wildcat, a RAM/ CIWS and a 3000 tonne hull. Ideally armed with 12-16 Norwegian anti ship missiles. In other words a corvette….not sure why the admiralty are so against corvettes? a well designed and equipped one could provide much needed… Read more »

Mr Bell – I couldn’t agree more with you. There are some excellent smaller vessels out there masquerading as corvettes that would actually give our escorts a hard time (Isreali and SA Mekos for instance). The RN seems totally pre-occupied by size and not capability and this is proving to be a mistake as the politicians aren’t seeing a creditable force. On the subject of a single hull type – I imagine considerable work has gone into the T26 hull form, so really we should be looking to retain it fully and build more – or reduce it where the… Read more »

While I disagree with the decision to early retire the Batch 1 ships, I think the idea of ordering more Batch 2 ships is a good one. The Royal Navy conducts many operations where a frigate or destroyer is overkill, especially costly modern ships, and where the stationing of such powerful warships may increase rather than lessen tensions. Several people have mentioned the Falklands and Gibraltar, but I would add anti-drug smuggling in the Caribbean and anti-piracy duties off Africa. I would add fisheries protection in a post-Brexit environment. The River Class are cost effective, have good endurance and allow… Read more »