Home Analysis Should we be concerned about the leak found on HMS Queen Elizabeth? 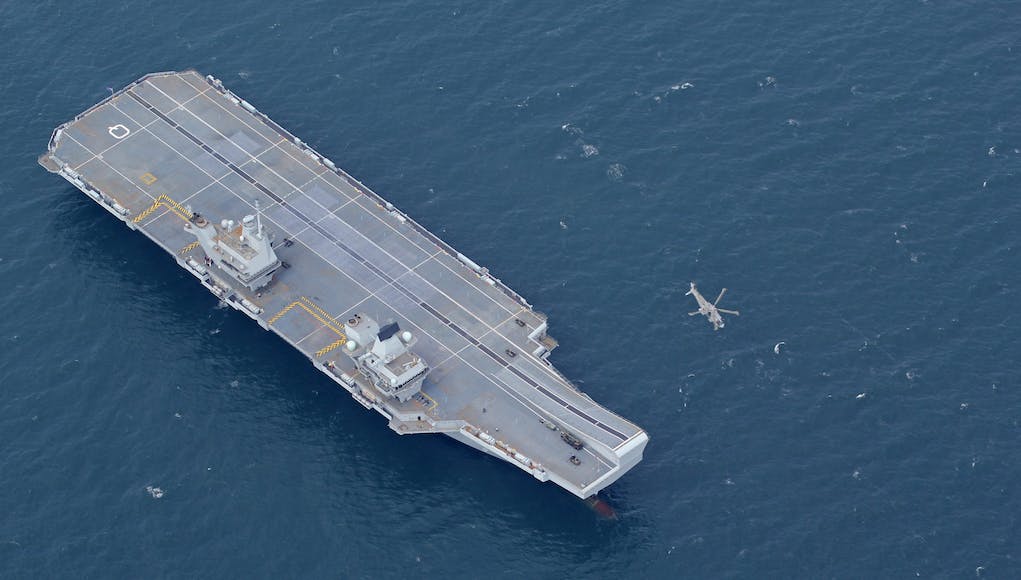 Issues like this occur often on vessels of all types, especially during a phase of their life designed to identify and rectify faults. This is not a serious concern.

While some argue that this is a major issue it should be noted that the Royal Navy themselves seem confident that it will not impact the schedule of the vessel. This would appear to suggest they’re not too concerned. We spoke to someone serving on board the vessel via e-mail today, he told us under the condition of anonymity:

“We’re bemused, nothing more nothing less. This so called issue isn’t a new thing and it’s not what I would call serious. It’s getting fixed shortly. Most of us on board don’t care or don’t know about it it’s such a trivial matter. We’re not ‘sinking’ and we’re not ‘leaking’ anymore than any vessel would be. It’s disappointing to see how easily this has been blown out of proportion.”

It was reported this morning that internal pumps are clearing the water and the leak will be fixed before the carrier sails again, again nothing to be concerned about is happening on board the carrier.

It should also be noted that the Royal Navy accepted the vessel from the ACA off-contract and was aware of the shaft issue. The taxpayer will not be paying for the fix either.

“An issue with a shaft seal has been identified during HMS Queen Elizabeth’s sea trials; this is scheduled for repair while she is alongside at Portsmouth. It does not prevent her from sailing again and her sea trials programme will not be affected.”

The Sun says that HMS Queen Elizabeth has been taking on up to 200 litres of sea water every hour.

“A faulty seal around one of the vast warship’s propeller shafts means 200 litres of sea water pour in every hour.”

A typical bilge pump even on a narrow boat, by the way, can handle over 1000 litres per hour.

“Every ship, to tell you the truth, takes on water that’s why you have pumps. What people have to realise is the whole reason for sea trials is that you race and rally the ship, you stress it right to its extremes, and you’re really looking for faults like this to see what happens.

You get this all the time, you’ve got very complicated engineering under the water, it’s operating obviously at sea and every yachtsman will tell you they take in water somewhere, that’s what you’ve got pumps for, that’s why you have dedicated engineers, it really is no big deal I have to tell you.”

The ThinPinstripedLine response to the story about the ‘leak’ can be found here and summarises today’s events very well.

“The issue affecting QUEEN ELIZABETH seems extremely minor, easily fixable and not remotely in the same league of problems that other ships have had. It is a testament to the quality of British shipbuilding skill, and the strength of the CVF design that she has come through trials with only very minor problems.

The battle for the Royal Navy though is pushing this narrative against a media determined to make a minor technical problem into a major PR disaster for the Navy. In the public mindset the front page news today will help set the narrative for the ships early life, regardless of how utterly untrue it is.

Part of this stems from a lack of understanding on the purpose of sea trials, or that faults will occur, but that they are easily fixable. It also stems from the problem that as papers have scrapped their specialist journalists, the days when deep experts like Desmond Wettern could be relied on to provide deep knowledge and understanding, spotting when an issue was a non-event, or equally when what the RN wanted to make out was a non-event was actually a scoop are long gone.”

The shaft seal issue was identified during trials and seemingly was not deemed serious enough to delay subsequent activities. While obviously this is an issue, it’s not a major issue as the 200 litres an hour will easily be handled by the ships pumps until the issue is resolved, which it will be before she sails. To put it in perspective, that’s around two bath tubs of water.

Clearly, my bath fills up faster than that & ships have pumps.
A non-story, but why?

No issue here. Dodgy engines, now that would be newsworthy.

Press reports make it sound as if HMS QE is fighting to stay afloat against a torrent of water, the likes of which hasn’t been seen since Titanic hit that lump of ice. Why hasn’t the ship been abandoned and the crew taken to the lifeboats…and surely HMS QE’s captain will do the decent thing and go down with his ship? I hope The Sun will be on the ball to answer these crucial questions. I mean…200 litres per hour! How can any ship take that and remain afloat? Seriously, though, this non-event is laughable. I am no fan of… Read more »

I think I have an idea for the MoD as to how to put a stop to this kind of infantile reporting. I’d suggest they invite the tabloid (and distressingly sometimes serious) defence correspondents in for a briefing and shine a torchlight against the wall. The little darlings will chase after it until they’re exhausted and ready for nap time. When they wake up they’ll have completely forgotten what it was they were so excited about !

Is there such a beast these days as a “serious” defence corespondent. From what I’ve seen onhere in recent months most of them live in La La Land.

@Geoffrey the FT, Times and BBC usually get things about right, but they are not writing/broadcasting for specialist audiences (ie: us here) but for everybody, so they are going to be generalist. Also, they are not going to be ‘pro’ (or particularly ‘anti’) defence that’s not their job – that’s the job of the MoD press office.

(As for being anti-UK defence, well any of the Russian sponsored news organisations for starters, plus various commentators in the Guardian)

best of the season to you!

Shouldn’t affect the resale price of these monsterous antiques, so we can sell to the USMC or KSA and allow the money to be reinvested into key capabilities 😉

If a ship this size couldn’t handle a leak of 3 litres a minute then I think it would be ok to be alarmed but it can and this will be fixed anyway as they know where the leak is.
If they had a picture of the ship listing to the side and people jumping off in terror then I’d start thinking we may have an issue.

The Brits Bashing Corporation had it on their lunchtime news, so it must be true.

Even the BBC ran this as there main headline this morning and they should know better, and they continue to mention the cost in every other word. Anti defence in the mainstream media is not helpful to our armed forces one bit.

@Robert, it isn’t ‘anti defence’ to mention the cost. It is proper reporting. I’d expect a journalist to tell me the cost of any major infrastructure project. Anything else would not be decent reporting

It is anti defence the BBC and should not keep mentioning cost we all know what it cost and massive carriers don’t come cheap .. We should be more concerned about TV licence fee cost for the BBC to keep spinning left wing lies

Proper reporting is to put it in context of what is required for a nation that is both wealthy & critically dependent on maritime trade. Proper reporting would be to not throw a hysterical fit, making out it’s more like 200 gallons a minute & portraying it as poor workmanship/design. The reality they’ve decided to forget is that leaks like this are common to new ships & not worthy of note across prime time news. BBC standards are abysmal as proved by their take on this non-story. There’s SO much that should be reported on of genuine & grave concern… Read more »

Maybe what we could do is ask the BBC if every time they were mentioned the cost of the poll tax sorry license fee that paid for them was also mentioned !

Stern glands leak.
They have an upper limit for XX Ltr/Min which when passed you change them out.
Some you can do afloat some you need to dry dock.
Its nothing new and it isn’t a disaster unless
for instance you are on a recent T45 deployment cut short because of the same issue.

Another, more important question – How was such a minor issue made public in the first place? Is the source a trouble maker on board ‘leaking‘ the information? (pun most certainly intended!) Perhaps the powers that be should track down the perpetrator and ensure that any future information in the press is rather less negative.

Not at all. You could be ankle deep sometimes in some of those sonar spaces.

The mainstream media over reacting to something out of ignorance – no change there then.

No its on sea trails and nothing to worry about .I would be worried if the RN owned that Russian rust bucket

Maybe we should club together and send them one for a laugh!

Ho Ho Ho a defence news item from the BBC. They’ll be telling us Father Christmas isn’t real next!

Navy Lookout has tweated about the stern seal face having minor damage and how it would be repaired. I’m no naval architect but it sounds a fairly routine procedure. Oh and apparently it isn’t leaking now it is alongside, again courtesy of Navy Lookout.

I just love the fact the news even reported it as being inconsequential, but then went on to try and make out it was a major embarrassment because of all the other news reports that had gone before……a sort of “look I know this does not really matter but all the other stuff we’ve reported on about the carriers put together clearly makes it worth reporting this rubbish” approach. I do find it disturbing how the modern media seem to try and create self fulfilling stories, by building one dross story onto the next in a bid to create news.… Read more »

Should we be concerned about the leak found on HMS Queen Elizabeth? | No. Betteridge’s Law

[…] Should we be concerned about the leak found on HMS Queen Elizabeth? […]

Surely the “defence correspondents” who on behalf of their respective rags have been presenting us with any amount of drivel, pig ignorance and un-researched “facts” can make something out of the seemingly hurried exit from her dry-dock by the Prince of Wales corresponding with HMS Queen Elizabeth,s defective mechanical seal