The Foreign Secretary attended a ground-breaking ceremony in Bahrain to start the construction of a new Royal Navy facility.

The base, HMS Juffair, at Mina Salman Port will play a central role in the Royal Navy’s ability to operate in the region, and reaffirms the UK’s determination to work with Bahrain to maintain security and stability in the Gulf.

This facility will give the UK an enhanced and permanent presence in the region, allowing longer-term deployments in the Gulf.

The deal for the base was signed at the Manama Dialogue event hosted by the IISS in Bahrain earlier this year and will see the Royal Navy get a £15m base of its own in the Gulf.

The arrangement will improve onshore facilities at the Bahrain Defence Force Mina Salman Port in Bahrain, the UK is planning to bolster the existing facilities at the Port in order to provide the Royal Navy with a forward operating base and a place to plan, store equipment for naval operations and accommodate Royal Navy personnel. 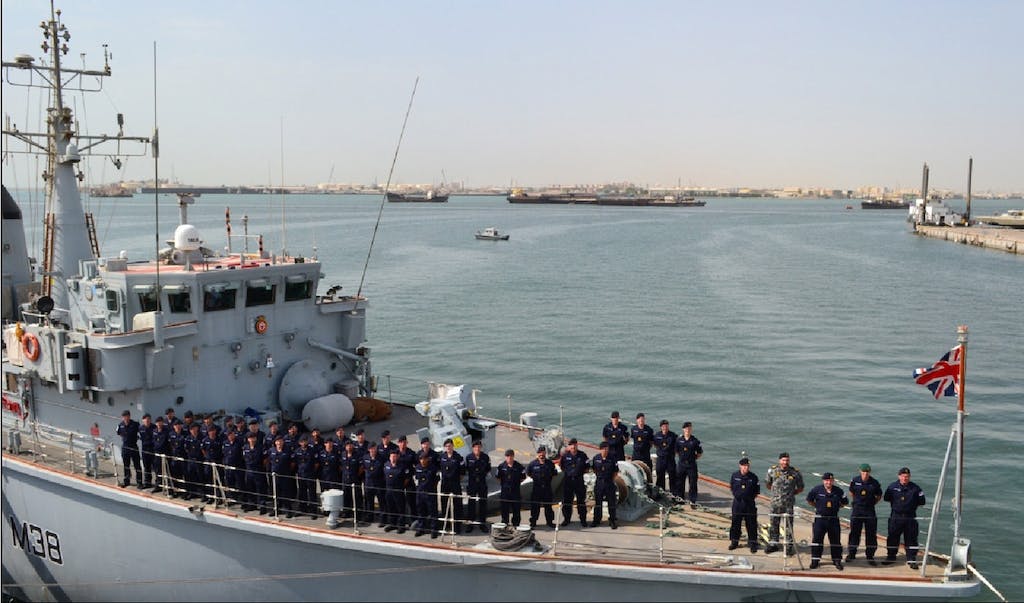 The base is expected to be able to host the Queen Elizabeth class and Type 45 destroyers as well as frigates and minehunters.

“The beginning of construction work at Mina Salman Port marks a watershed moment in the UK’s commitment to the region. The presence of the Royal Navy in Bahrain is guaranteed into the future, ensuring Britain’s sustained presence east of Suez. The new facility will enable Britain to work with our allies to reinforce stability in the Gulf and beyond.”

“This is a reflection of the continued cooperation and engagement between the Bahrain Defence Forces and the UK Armed Forces. We welcome the continued support from Bahrain which enables the Royal Navy to operate in the Gulf region.”

The base is expected to be able to host the Queen Elizabeth class and Type 45 destroyers as well as frigates and minehunters.

Wots wrong with the old one….Oh Oh, the yanks have got it. PS Patrick, have a shufti here…. https://en.wikipedia.org/wiki/HMS_Jufair

named after the Visir in Disneys Aladdin.

Jaffar was a real person. He was the Visier to the Caliph Harun al-Rashid
back at the end of the eighth century. Harun eventually executed him, probably so that he would take the blame for all the errors of the dynasty.

Jaffar later got turned into a fictional character by Burton in his Thousand and One Nights, and then it got picked up by Disney and turned into the usual American sacharine version.

why not build it in kenya ?

You mean like the ships already deployed in the region that will use the base?

14years ago we had a fleet now were so small we have one of smallest ues there new but one ship cannot be on two places at once take out refits tec were nearly the size of the Dutch fleet y
Too small. O
For uk

Can someone tell me why the base is named ‘HMS Juffair’ and not ‘HMNB Juffair’?

Why F-35 trials aboard HMS Queen Elizabeth will be conducted by...

Five ships to be permanently based in Bahrain