Home Opinion Disinformation being ‘weaponised at levels nobody imagined’

A paper has been published by Stewart McDonald MP setting out his assessment of disinformation activity in Scotland as well as practical solutions to fight back.

In the document by McDonald entitled ‘Disinformation in Scottish Public Life’ is an assessment of disinformation activity in Scotland over recent years, including with regards to the COVID-19 pandemic and political campaigns.

Stewart McDonald is the SNP’s defence spokesperson at Westminster and a member of the Foreign Affairs Select Committee and he is keen to stress that this paper is not an SNP policy paper or a paper about the constitution, but instead one that seeks to build a “much-needed consensus to help us move forward”.

I agree, disinformation is something that impacts everyone no matter their political opinions. 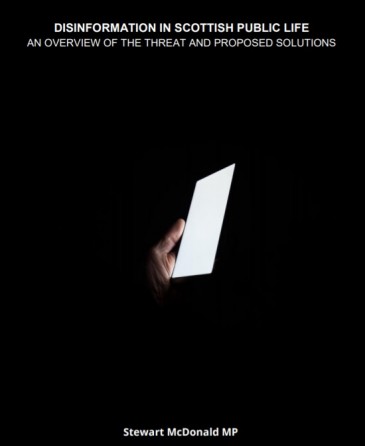 Stewart assesses the actions of hostile states and other actors, outlining some examples of the different ways in which they seek to interact with people in Scotland on a range of issues and via different platforms and means.

In the foreword, Stewart points out that disinformation is not a new problem. However, it is growing in sophistication, scale and reach.

“I have spoken and written on numerous occasions urging us as a society to call time on  the false sense of security in which we continue to bask. Disinformation poses an urgent threat to all free and open societies, and Scotland is no exception. However, as other countries think seriously about how to combat hostile disinformation campaigns, Scotland has been uncharacteristically mute on the subject. Thankfully, that is starting to change: the manifestos  of some parties at the 2021 Scottish Parliament election, including my own, show that there are those who have started to engage with the issue. The work, however, is just beginning.”

“Disinformation campaigns allow hostile foreign states to discreetly target and influence  citizens while remaining below the threshold of war, fomenting distrust and polluting the  information ecosystem. Russia, China and Iran have all been credibly accused of attempting  to distort the information ecosystem in Scottish public life, using a range of platforms and media to manipulate public opinion. These campaigns do not themselves create distrust or division, but instead exploit existing rifts in societies and capitalise on pre-existing feelings and beliefs.”

The author then goes on to outline the variety of tactics used by three hostile states, the following excerpt discusses Russia.

“The Russian government has made extensive use of its state-backed media platforms in  Scotland, platforming George Galloway and Alex Salmond on RT and Sputnik. These  platforms exist to promote the Kremlin’s line on issues of key concern to the Russian state:  after the Skripal poisoning, RT was fined £200,000 for repeatedly breaching impartiality rules.

A 2018 report from Kings College London on Russian-state backed media in the UK found  that RT and Sputnik pushed a variety of narratives around the Skripal poisoning, including the idea that that the Novichok found at the scene was produced by the United Kingdom and that the poising was a hoax orchestrated the by UK intelligence services.

While the threat from  these platforms should not be underestimated, the relative failure of Russian disinformation to  take root in Scotland had been demonstrated by the closing of the Sputnik office in Edinburgh  in April 2021, citing a ‘hostile environment’. Nonetheless, RT and Sputnik continue to  maintain offices across the UK, producing English-speaking content for a Scottish audience.”

I’m not going to reproruce the whole paper here so I’ll skip to one of the solutions Stewart presents named “Information resilience training”.

“People will always exaggerate and embellish stories and politicians will always spin. However,  elected members must be more cautious than most about what information they share. Sharing false information or ‘unconfirmed reports’ – as one MSP did in the Scottish Parliament  in 2020 – erodes public trust in democratic institutions and the people who run them.

The UK and Scottish Governments should, drawing on the Swedish experience and the  model of the UK Parliament’s ‘Valuing Others’ training, implement a course of information  resilience training for politicians, political press officers and selected civil servants.”

There are a number of well thought out solutions to the issues outlined by McDonald, you can read them yourself by clicking here.

“Disinformation is not a new threat, but it is one that is now more sophisticated than it has ever been before. It represents a challenge to open societies that many countries across Europe and the wider world are dealing with, and Scotland is no different. Any challenge to our own security, public health and societal cohesion must be met with a robust national strategy to counter that challenge and maintain the open, democratic way of life we enjoy.

This report, whilst not a wholesale strategy, is an attempt to outline my own assessment of how the threat of disinformation to Scotland currently manifests itself and maps out some ideas on how we can meet that threat. This ought to be something that has way more discussion in political and public life and so I hope, if nothing else, that is what my report encourages. The pandemic has brought into sharp focus why this issue is of real importance.

Disinformation, both before and during the vaccine campaign, has been weaponised at levels nobody imagined. Clear public health messaging really matters when you are trying to save lives by communicating facts, and there is no shortage of people who want to distort those facts and disrupt our ability, as an open society, to communicate them clearly.

As we start to both recover and learn from the pandemic, it is incredibly important that lessons around how we counter-disinformation is part of that learning process. We cannot go into the next pandemic – and there will be another in the future – with the same toolkit as we’ve used this time round. Disinformation campaigns are always evolving to become more sophisticated and better resourced, and so too must our own counter-disinformation strategy. I hope this report encourages some deep and cross-party thinking on the issue, and encourages politicians and civil society groups to work together and help Scotland build robust information resilience that is fit for the modern age.”

You can download the report here ‘Disinformation in Scottish Public Life’.

Ridiculous. Disinformation have been always paramount.
Otherwise how the cooperation between Communist and Fascist regimes have been possible before WW2 – an important part of of USSR naval tech was Italian and that was censored by all “reputable” media after WW2 and continues to this day.

Note that disinformation also includes omitting censoring information.
Starts with BBC and continues from there…

so is it true that as the russian navy spends so much time on the moray firth,
that they may claim soverienty rights,
as silly as it sounds, in this day and age, surley anything is poss,
the Royal Navy now constantly looks after them.
Navy monitors four Russian ships in the Moray Firth – STV News

I think it is common practice amount mariners, that all nations will provide a safe haven to ships if required. Be that through the results of a failure of the ships systems or adverse weather. Imagine the headlines if they had been denied entry and that had resulted in one of the ships sinking or the loss of a crewman overboard.

It works because so many people today have zero common sense.

At bast case I believe this is seriously over egging what actually goes on regarding state based disinformation. From my experience of this, the biggest pushers of disinformation in the UK are the UK media (some more often than others) and the UK government. I have watched RT and their disinformation is so obvious most of the time it’s actually laughable/pathetic (The people in Salisbury were visiting the cathedral) The deadly ones are those you don’t realise are doing it. E g. Photographer goes to uncrowded beach/ park, takes photo of a certain section using a certain zoom lense and… Read more »

Just to add, I think one of the reasons why the UK gov and mainstream media are so much more deadly regarding disinformation is that they are supposed to be trusted sources, so what they say carries more weight. It’s one thing some Joe blogs droning on about carriers with no aircraft, it’s another entirely if its an mp that does it.

They are conflated on propose by the state and governments, authorities.
From some sparce available data 25% or more of those deaths are not by Covid.

Then obviously we have how PCR tests changed (since Nov-Dec 2020 much less cycles allowed so a bit more reliable test ) but still a very bad situation.

Then you also have the official data in of problems that vaccines cause in Eudra Vigilance website and no media posts them . Obviously disinformation.

Data is data and you have to cut it some way, there are a few ways to look at and analysis deaths during a pandemic and depending on the way you cut it the death rate for the first year sars-Cov 2 range around the ball park of 120,000 to 150,000. With an uncounted number now crippled with post covid syndrome, it’s all in the right range of suffering and misery so let’s not pretend it’s worth arguing over. Worldwide we are heading to the 4 million dead and you can bet we are not half way to end yet.… Read more »

I don’t find media bias a problem as once you know where they sit on the political spectrum they actually discredit themselves. A Guardian or Express article is going to tainted to attract the type of readers they target so the article is instantly questionable for me.

I have been out of town so come late to this debate. An interesting piece by Stewart McDonald. My thought is that for the people who inhabit the island of Great Britain, it is far better that they co-operate closely in this field including utilising the strength of integrated Defence and Intelligence structures than doing so via seperated institutions.