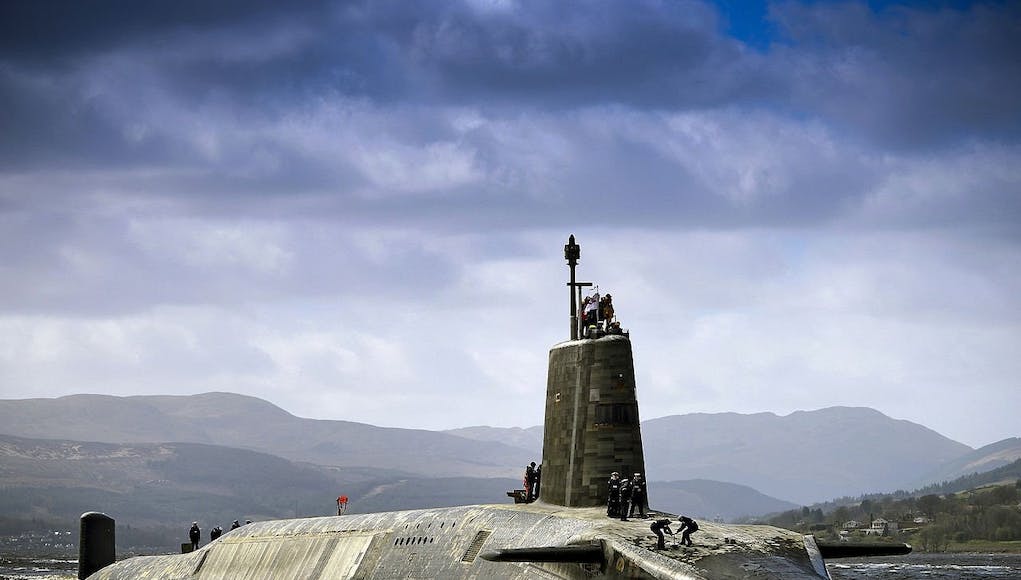 Controversial plans to relocate Faslane naval base to Gibraltar to prevent Spanish incursions into local waters are being blocked by the EU.

**If you’re reading this article any other date than the 1st of April because someone has shared it on Facebook or Twitter, be very careful of what that user shares in future as they’ve just proven they don’t read articles they share on social media.

The purpose of this article, aside from our usual April Fools day joke, is to highlight that reading beyond the headline should be the ‘done thing’ for every article and not only those published today. The real message behind this article is, be careful when you read news online or offline as sometimes it’s entirely false.**

It is understood that plans to move the base came about after the Scottish government requested the move and the Government of Gibraltar were more than willing to host the facilities from HMNB Clyde.

I was told this morning by local resident, A. Mann, that the move is also expected to halt Spanish incursions into the local waters:

“It’s fairly obvious, the more powerful a vessel that is based in Gibraltar, the fewer the incursions. I have been campaigning for the entire Royal Navy to be based in Gibraltar for years now so this is a positive step.”

The issue, however, is an objection from the European Union who said in a statement:

“We do not accept that the relocation of a major military base to an area considered by Spain to be part of Spain is an appropriate action, especially committed by a state leaving the European Union.”

We are currently awaiting a response from the UK Government.

Faslane (HMNB Clyde) is the second largest single-site employer in Scotland, after the Queen Elizabeth University Hospital in Glasgow.

Faslane is one of the Royal Navy’s three main operating bases, alongside HMNB Devonport and HMNB Portsmouth. It is best known as the home of the UK’s four Vanguard-class nuclear-armed submarines which carry Trident II D-5 ballistic missiles.

“There are 520 civilian jobs at HM Naval Base Clyde, including Coulport and Faslane, that directly rely upon the Trident programme.”

It’s important to remember that the 520 jobs mentioned are civilians and strictly those working on Trident missiles.

However, the base does not just support Trident armed submarines. In addition to the nuclear submarines, the base is home to 10 conventional surface vessels of the Sandown class mine countermeasure and Archer class patrol vessel fleets.

Counting people supporting the Trident programme and the four submarines which host the missiles, the number comes to around 6,500 jobs. The MoD say that around 3,500 of those are uniformed Royal Navy personnel, 1,700 are contractors and 1,600 are other civilian employees.

All 11 Royal Navy submarines were to be based on the Clyde at Faslane from 2020, seeing the number of people directly employed at the base rising to 8,200.

The number of jobs directly and indirectly supported by Faslane is just under 11,000; this comes from the 6,500 military and civilian personnel employed at HMNB Clyde and a further 4,000 created through the supply chain and the local economy according to an EKOS report commissioned by Scottish Enterprise Dunbartonshire.

If you’ve read this far, congratulations. The purpose of this article, aside from our usual April Fools day joke, is to highlight that reading beyond the headline should be the ‘done thing’ for every article and not only those published today. The real message behind this article is, be careful when you read news online or offline as sometimes it’s entirely false.

It is like a dodgy bus. Wait ages for new material to rant and argue over and now 4, or is it 5, appear overnight!

Widen the existing tunnels and put the subs inside!

I’m surprise that was never actually done, you could prob carve s submarine pen out of the Gibraltar tunnels.

as a regular visitor to gib i can say this, the fact that less and less royal navy ships visit is having a profound effect on the gibraltar economy especially the pubs where over one in three; old sailors haunts are now gone.

1st of April.. nice one hehe

Yer you got me well done . Very happy I scrolled done as about to get very shouty

I hope you have some good ones for next year, and haven’t used them all up now. After all we could still be looking at April Fools in Westminster in a years time.
Mind you it’s not such a bad idea, the weather is better in Gib….

Just wait, we’ve got plenty of material now for next year. Potential ideas include:
-Type 31 programme relaunched AGAIN
-Entire Royal Navy sold off to cover Brexit bill
-Water pistols and BB guns to be fitted to T26 in place of overpriced cannons and missiles
-Spain gifted port of Gibraltar for naval base

Now that Is a Prize Winning April Fools day Post !!!!

I think there should be a petition to recover the lost British lands in what is now known as France, starting with Normandy, quickly followed by Calais.

oh wait you forgot about the peace mongers in this country who will probably protest and burn down the houses of parliament!

Nice one id forgotten it was April st

We could ship over all the old hulls still needing their reactors decommissioned, even better go the whole hog and fill up the rock with all our nuclear waste, jobs a good one.

then let spain have it even though it will glow in the dark, like peckham spring water remember only fools n horses? episode

Yep….well if you really want it you can have it….. soz about the 1000tons of waste…….it’s only got a 10 thousand year half life so there is a bright side…..goes a lovely line in 2 headed fish as welll.

Massive earthquake strikes Iberian Peninsula! Spain slides into the sea! Only the new island of Gibraltar left! EU demand it be blown up to show solidarity with Spain!!!

Er being pedantic, Gibraltar is already an island, a tied-island I believe ?

Personally I think the Spanish should be grateful we didn’t keep the Balearic Islands too.

whatever, its british and that’s all that matters

oops fooled me there, but its not a bad idea, the manuels wouldn’t be so keen

Chortle…
What a great idea.
If Scotland ever was daft enough to vote for independence sometime in a generation or 2s time we should reallocate the nuclear deterrent to Gib.

MR Bell. If Anyone was ever “daft enough to Vote for ” anything, Ever again, I’d be extremely surprised.

Then it should be blocked. See how they like it.

How about Germany’s Naval forces now at 100% combat readiness. lol

Quote from Mark Twain, in today’s Times. “If voting made a difference, they wouldn’t let us do it”

Lol. I’ve only ever Voted once, for that very reason. Fat lot of good It made. Grrrrrr

George is on a sugar rush.

I would like them to be moved to Northern Ireland if they are for moving any where. We could do with those jobs.

somebody at ukdj seems to think it’s good to rehash old jokes that were poor the first time round. UKDJ ; UK’s dimmest journalists

Russ, you commented on an April Fools article many months after it was published, you’re not selling yourself very well here chief.

its our blooming territory so we will do what we blooming want! go and find your own territory to militarise.

How about storing the old boats that are currently down the road from me… on environmental grounds obviously.

Ha! That is a funny idea. Now that really would upset the EU!

Store them inside the Rock then seal the lot!!!

Have you noticed though this article is from 2019?!