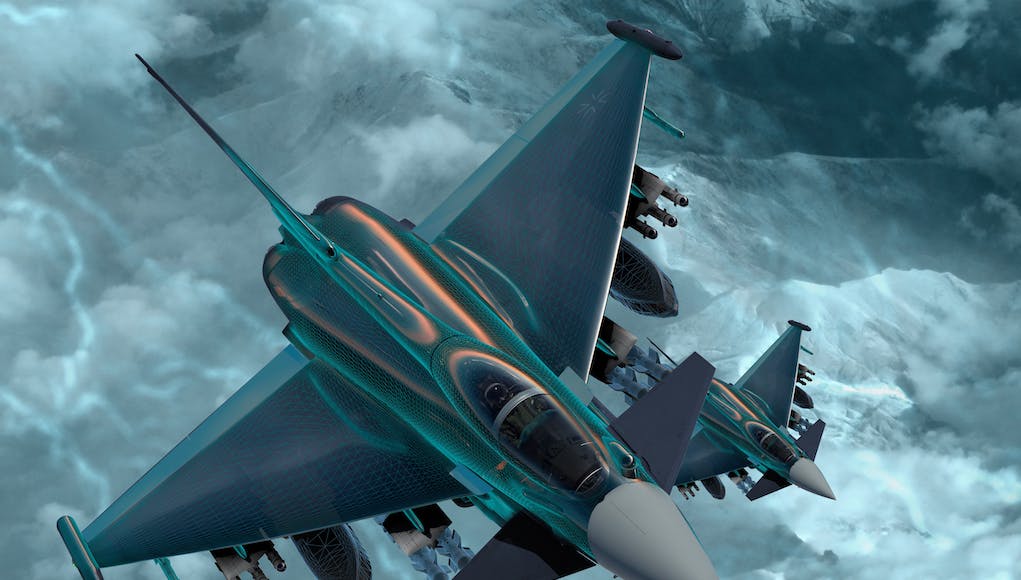 The Ministry of Defence and Airbus have notified Canada of their decision not to participate in the competition to replace the CF-18.

The bid cited requirements to integrate the jet into NORAD and technology transfers as barriers to a successful bid.

“Both the UK MoD and Airbus Defence and Space deeply appreciate the FFCP team’s commitment to transparency throughout the last two years as well as the thoroughly professional nature of the competition. This applies in particular to the efforts made to facilitate an enormously complex task of developing the RFP whilst responding to feedback from the suppliers.

After careful analysis of the input from the draft as well as the final RFP, two factors have led to the Typhoon Canada campaign team’s decision to withdraw from the project:

First, a detailed review has led the parties to conclude that NORAD security requirements continue to place too significant of a cost on platforms whose manufacture and repair chains sit outside the United States-Canada 2-EYES community.

Second, both parties concluded that the significant recent revision of industrial technological benefits (ITB) obligations does not sufficiently value the binding commitments the Typhoon Canada package was willing to make, and which were one of its major points of focus.”

“Airbus Defence and Space is proud of our longstanding partnership with the Government of Canada, and of serving our fifth home country’s aerospace priorities for over three decades. Together we continue in our focus of supporting the men and women of the Canadian Armed Forces, growing skilled aerospace jobs across the country and spurring innovation in the Canadian aerospace sector.”

The first aircraft (of whatever type wins the competition for 88 jets) is anticipated in 2025 with the fleet continuing in service beyond 2060.

Canada would be better with an interim purchase of F/A18’s and then joining Tempest with the UK and Sweden if they want a twin engine gen 5 option.
I know Italy wants to join the Tempest program but I don’t see them being a reliable partner after pulling their F35 purchases after gaining the work share agreements and their finances are not going to get better any time soon.

That’s probably the least cost effective route they could take. The F/A-18 as a platform is past its prime, and delaying your need for a modern platform just to join a relatively small and likely very expensive programme more than 15 years away from service is ridiculous. Also, Tempest is Gen6, not 5. Compare that to the Lightning: it’s Gen5 vs a selection of Gen4.5 fighters, it’s already as cheap or cheaper than many of it’s competitors, Canada’s biggest neighbour and ally will be operating thousands of them for the next half a century, and it doesn’t have any import… Read more »

Id keep an eye on the Japanese.

I wonder if this will influence the new Fighter competition for Finland also?

So what aircraft are left in the competition? I thought Canada had dumped Boeing’s F18 proposal due to the issues with Bombardier. The Rafale was dumped due to irregularities with the bidding process. Then Canada said the F35 was too expensive. So if Typhoon has dipped out, who’s left?

Getting involved with Canadian competition is as bad as getting involved with India, even if you pass all the hurdles which are emended there is no guarantee you will even get a contract even after winning the bid. Typhoon may be the correct aircraft for Canada but it won’t matter. They rejected F35 on cost despite being an F35 partner and they reject bookend die to Bombardier issue.

They should just buy F35 as they are signed up to do and every one else is doing.

They probably will eventually go the F35 route.

I would imagine senior officers in the RCAF are pulling their hair out with this political football of a procurement and just want to get some bloody hardware ordered!

A tight 2025 in service date, means a minimum change variant (of whatever is selected) and it’s going to be slowly paired back to the F35.

I agree they will go F35 but it’s good that EF consortium is pulling out, puts the generals and politicians on the spot when they issue unfair procurement contracts designed to favour a bidder but give the illusion of competition. More defence Contractors should follow suit however the French and Swedes are so desperate they will Kling on to the end no matter what just as with India competition.

It was never going to win anyway…we all know that whatever tortuous, twisting route they take, it was always going to end up with the F35 being chosen.

Canada has an election in October and that should determine which fighter wins the competition. However, this is Canada and nothing involving defense is ever final. Canada was all set to buy the F-35 when candidate Justin Trudeau vowed to cancel the deal in a campaign pledge. There was no rational basis for that decision. Although trailing in the polls for most of this year, Trudeau’s Liberal Party is now running neck and neck with the Conservatives with projections showing the odds are that neither party wins an outright majority. Should the Liberals be returned to power there is no… Read more »

Canada should just walk away from the NORAD system, and chose the aircraft they need.

That would open up their ENTIRE coast line and the arctic to attack. Canada relies on the US for nearly everything in regards to defense and that includes air defense radars, satellites, and coms.

The best aircraft for Canada is the F-35 but the Liberal Party and the Conservative Parties make defense decisions based on what is best for their party. Sad, but true.
Canada’s economy is totally intertwined with that of the US. It can’t pull out of NORAD even if it were capable of defending its airspace by itself, which it is not, and neither political party has the will nor desire to spend enough to do so. Like almost all of Europe, Canada is a parasite on the US when it comes to defense.

Pretty good solution IMO despite being a boycotted Boeing product.

The F15 would actually be a good choice for canada .

Canada gets dinged for what will be a decade delay over their aircraft purchase but the irony is they will get a far better aircraft regardless of what they choose. For example, if Canada revert to F-35A then it will be far less expensive both to purchase and likely operate by 2025 versus original purchases starting in 2015, with ALIS and hourly flight costs under pressure to be fixed and reduced respectively by all existing users. Jumping in at Block 4 gives Canada a more stable, proven, developed platform, with much broader weapons choice too, so they might elect to… Read more »

A good choice for Canada would be a single seat F-15X with the latest radar, ECM, ect like the USAF is buying now. Great range, cutting edge electronics and very good performance in a combat proven airframe. Not too mention a twin engine which Canada prefers. Canada has little need for a stealthy platform as they will never be attacking on day 1 of a conflict like the US or Britain does. A stealthy platform would be very expensive to maintain in the small numbers they could afford anyways. The F-15X would give them very good air-to-air and air-to-ground capabilities… Read more »

It’s going to be Super Hornets isn’t it? F-35 will be too expensive but Canada will want a dual engine fighter over the Arctic patrol areas.

The Eurofighter is either not winning or withdrawing for bid processes. Really don’t fancy the chances of the UK maintaining fighter production after the Qatar orders are complete. So the reality may be a 8-10 year gap in fast jet production. My personal view is Tempest is a seat at the table program to get us into another program like Replica did with the F35. We might not assemble our next fighter here in the UK and just supply parts so there’s no real need to maintain assembly skills. We’ve seen significant outcry about the possibility of not building a… Read more »

I am hoping that’s not true. The US are looking at the next fighter to replace the F18 in the US Navy and the F15/F22 in the USAF. Unlike the F35 program, both services have elected to go on a separate paths. The US Navy are desperate for a long range air dominance fighter that they lost when the F14 was retired. The F18 is ok, but not brilliant in this respect. The USAF are looking at something that can replace the F22 with an increased weapon load. Both projects are similar to the UK requirement i.e. long range air… Read more »

DaveyB. Can’t say if its true it just my view of the situation we’ve place ourselves in. I just don’t see how well keep the skills going to enable Tempest to get to maturity. I too hope I’m wrong, there lots of people vocal about shipbuilding but we seem to have gradually brought ourselves to a point where we will not be able to produce a complete aircraft in the UK. We don’t no want Sweden and Italy are up to, Sweden fully commit to the program so could just be using it to get a bigger share of the… Read more »

So glad the 6th gen US fighters won’t have to include a STOVL version. Having that requirement for the F-35 really crippled the aircraft in terms of design and achieving F-22 or better stealth/flight performance. Not to mention terrible views over the shoulders.

Which is why we should order more Typhoons; another 48 to replace older versions and boost our numbers a bit more.

That seems to be the only way to go, sell off the older aircraft an top up with new airframes. Ideally we’d develop a tranche 4 Typhoon as the replacement. But its all about budget. Anyway with an election looming can’t see any of this being a priority for any of the political parties.

Sadly you’re probably right; that’s the problem with Brexit, no matter people’s inclination: it sucks attention away from literally everything else. If there’s an election it will literally be the only thing on anyone’s agenda.

But yeah, 48 Tranche 4 Typhoons would do us nicely, both in terms of our aircraft manufacturing industry and for the RAF. Include conformal fuel tanks, AESA radar and inregrate it for whatever interim anti-ship missiles we adopt between Harpoon and Perseus.

It would make sense to pension off the Tranche 1 Typhoons. These are the ones primarily used for QRA etc and have accrued the most airframe hours. Apparently unlike the Italians we will not be upgrading these to later modification standards. So they will always only be used for air defence and airshows, which places a larger burden on the multi-role Tranche 2 and 3s.

If Canada stays gen4 type fighters, and with the vast range of the country, I think the most modern version of the F-15 should be an option. Like the f-15x or f-15sa. That is if they can make up nice with Boeing. With the US buying some new F15s, it could lower the price. Just a thought