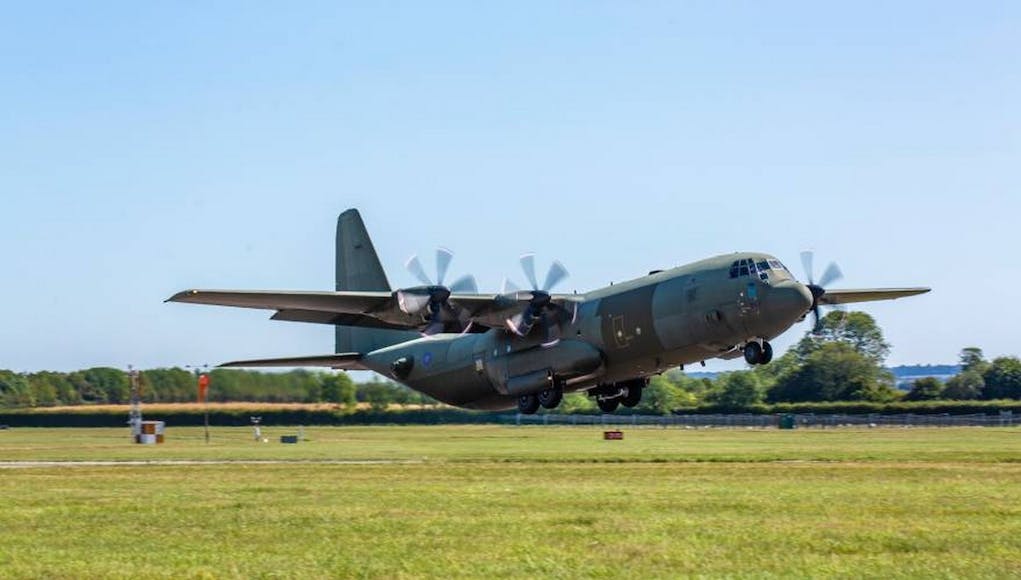 Marshall Aerospace and Defence Group has delivered the first of 14 RAF C-130Js to undergo Enhanced Service Life Centre Wing Box replacement back to its base at RAF Brize Norton.

The company say they modified the aircraft with a new Centre Wing Box kit that “delivers significant durability enhancements and extends the service life of the centre wing box by up to three times”.

This modification will enable the RAF C-130J fleet to remain in operation until 2035 and beyond.

“It was truly inspiring to see this aircraft undergoing such innovative modification in our hangar. The team have once again demonstrated their unrivalled expertise on this platform, working collaboratively with a range of stakeholders, including the Ministry of Defence and OEM Lockheed Martin. The C-130 has been in production longer than any other aircraft and with more than 450 C-130Js in service it continues to be the transporter of choice with air forces across the globe. We are very proud to be playing our role in the sustainment of such an important UK national asset.”

“A major milestone in ensuring C-130J capability out to the 2035 out-of-service date. Working closely with the DT, the MADG team have demonstrated exceptional technical ability and determination in successfully completing this highly complex engineering task; even a Covid-19 outbreak couldn’t stop the team’s progress!”

During the last five decades, Marshall has supported more than 90 C-130s for the Royal Air Force, performing both standard and deep maintenance, as well as engineering and integrating capability modifications.

This work to extend their service lives suggests to me that they will be scrapped or sold as a result of the forthcoming Security and Defence review in classic MOD style.

Sadly, you are probably right!

It does tend to be the story, the UK pays out on expensive maintenance just before selling the asset for a fraction of that spent cost.

The more cynical amongst us take a jaundiced view and look for financial lubrication of the system.

Im more optimistic – there is a specific need for the Hercules to stay in service,hopefully it will.

Doubt it. DSF has a lot of clout upstairs. They are needed and in demand.

Agreed. This was likely requested by the new owners as part of the deal. Be interested to see which civil servants suddenly become rich or “retire” to lucrative seats on the board.

I think that there are still a couple of shorty C130Js left in storage. Let’s have them out and Marshall’s convert them to helicopter tankers…a capability that we don’t have. Better that then flogging them off cheap to Asian air-forces!

Is there a requirement to refuel RAF/RN (and AAC) helicopters? Do any of them have the capability to be refueled?

Not disagreeing, just interested to find out whether it would be as simple, at least technically, as bringing out the C130J C4s and converting them

Probes exist for Chinooks and I believe Merlins! The French certainly think that they are worthwhile and I believe the RN is keen to acquire the capability!

Thanks Herodotus & Cam, I appreciate you taking the time to clarify

The Commando Merlins were pictured with probes so at least some of them have the fittings.

Yeah, I Think they were testing with the probes.

Actually it was AgustaWestland as they were at the time, not the RAF. The work was in support of the HH-101A CSAR programme for the Italian Air Force. Check out Leonardo’s website, his is a very capable aircraft. Good old UK getting left behind again . . .

there is a field somewhere outside Stafford, you go past on the train and there used to be “shortee” carcasses stacked upon each other!

Love the idea. Would it also address the on carrier on board delivery and F-35B refuelling gaps?

Ermm….I think the answer to that one is No. I can’t imagine anyone seriously wanting to operate a C!30J off QE or POW. Can you imagine an aircraft of that size going up the ski jump ….ye gods!

Well, tongue in cheek of course. But I do think that the option of a fixed wing short take off and landing, wide bodied twin prop ought to be further explored …..these V22 type things just don’t look right.
Something along the lines of this…

A modest amount of development work on the wings, power units and undercarriage, steaming into the wind…I reckon it would work. And it’s British!

Except perhaps Jimmy Doolittle – he must have relatives?!

It’s good to see C130 is expected to remain in service until at least 2035. I thought the treasury would be looking to axe them using the A400s to replace them.

That was the position, until reversed in 2015 SDSR.

22 Atlas cannot carry our their daily transport role and do the myriad tasks required worldwide by DSF, carried out by 47 Sqn.

Quite confident they are kept and eventually replaced by another transport type.

Let’s start designing and building our own transport aircraft once again, if Ukraine can do it then surely we can.

Yeah until recently I would have said this was a non starter. But Embraer in Brazil managed to do it so not sure why Bombardier or whoever owns the site in Belfast could not do it.

I guess it’s all just too high risk especially with little chance of exports unless we get partners to join the program.

And I would rather have more assets than half the number just because they are built in the UK. The French have huge logistical holes in their mitary because of their buy French or nothing at all attitude.

With you there. I would like to see the C130’s equipped with Bushmaster cannon and Brimstone capability and Helicopter refueling.

Both additions would add considerable flexibility to our Special forces.

There’s no doubt that Britain is on the cusp of a major political and economic pivot point:- Chinese (EU?) militancy/C-19/Brexit/United Kingdom. These things happen periodically, albeit not generally at quite this pace, and are a stern but necessary occasional test of our national beliefs and confidence, or perhaps the acceptance of diminishing relevence. The one known positive over the past year has been the defeat of Corbynism – down to the common sense and respect for democratic process of the traditional Labour voter as much as anyone, and I’m a Tory. With the above background, the approaching Integrated Review really… Read more »

Here is an idea, if the government is going to sell the C-130J then why not sell them to the international aid department. These could then be dedicated aid aircraft but in times of emergancy revert to the RAF.

Interesting idea Ron,but could an Aid Department support them,also it might just entail another bureaucratic Paperchain that isn’t needed.

Now that the work is reaching its conclusion, the employment of the RAF C130J’s in the future, needs to be moving towards operating with the UK Joint Special Forces, four of the aircraft could be turned into gunships to provide specialized fire support to the SF’s. Who knows what the defence review will decide on in the future.

Mr Me
Reply to  Barry Curtis

Can’t see the justification in the cost of a gunship conversion. They are useless in anything other than zero anti air risk environment. That’s the sort of combat we are moving away from, we need to realign capabilities for a more conventional conflict, and that will involve contested air space.