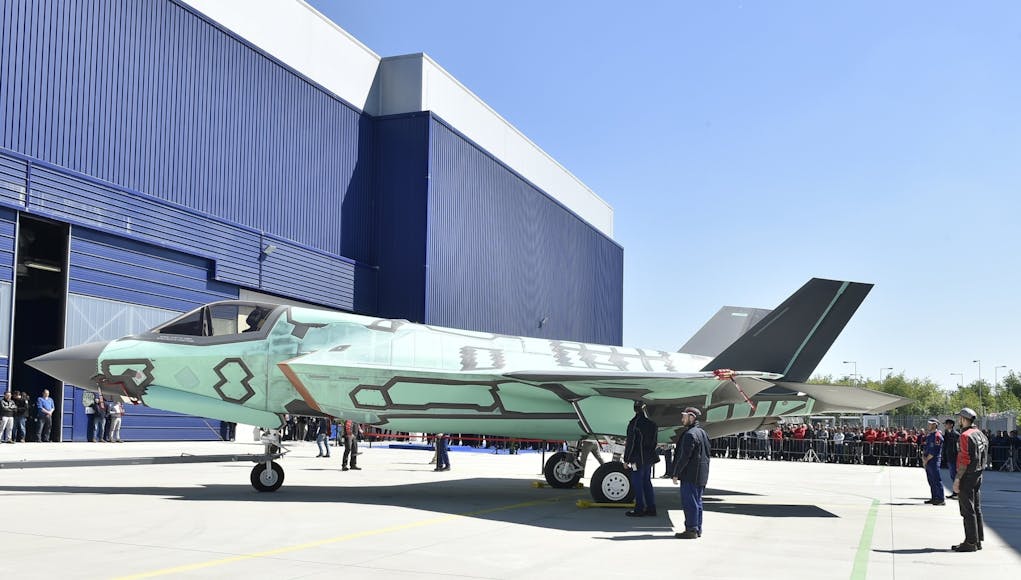 The first F-35B assembled outside the United States rolled out of the Final Assembly and Check Out facility in Italy today.

The Italian FACO is owned by the Italian Ministry of Defense and is operated by Leonardo in conjunction with Lockheed Martin with a current workforce of more than 800 skilled personnel engaged in full assembly of the Conventional Take-off/Landing F-35A and F-35B aircraft variants and F-35A wing production.”

“Italy is not only a valued F-35 program partner that has achieved many F-35 program ‘firsts’, but is also a critical NATO air component force, providing advanced airpower for the alliance for the coming decades.

BL-1’s first flight is anticipated in late August and it is programmed to be delivered to the Italian Ministry of Defense in November. In addition, two Italian F-35A aircraft will fly from Cameri this year, the first by July and the second in the fourth quarter. To date, seven F-35As have been delivered from the Cameri FACO; four of those jets are now based at Luke Air Force Base, Arizona, for international pilot training and three are at Amendola Air Base, near Foggio on the Adriatic coast. The Aeronautica Militare has already flown more than 100 flight hours in its Amendola-based F-35As.

After a series of confidence flights from Cameri, an Italian pilot will fly their first F-35B jet to Naval Air Station Patuxent River, Maryland, early in 2018 to conduct required Electromagnetic Environmental Effects certification. The next Italian F-35B aircraft is scheduled for delivery in November 2018.

The Cameri FACO has the only F-35B production capability outside the United States and is programmed to produce a total of 30 Italian F-35Bs and 60 Italian F-35As, along with 29 F-35As for the Royal Netherlands Air Force, and retains the capacity to deliver to other European partners in the future.

The Italian FACO is also producing 835 F-35A full wing sets to support all customers in the programme. The FACO was selected by the US Department of Defense in 2014 as the F-35 Heavy Airframe Maintenance, Repair, Overhaul and Upgrade facility for the European region.

Still can’t quite believe this facility is in Italy.

can’t believe that as the largest defence spender in the EU the UK.. home of the Jet Engine and the only non American Level 1 partner, is not building the F35 here. I’m not a fan of trump, but at least he’s willing to use American clout to get businesses building in the US.. considering the amount we spend the F35 should be being built here.

I thought the UK was the F35 closest partner with Lockheed Martin I am shocked to read the article.

I’m surprised too. I’d say fair enough if Italy built the hulls like they do for Eurofighter, but is there some reason the UK isn’t going to finish off the F-35B, same as it does the Typhoon, near Preston? Price I guess!

Up front I have to say the Italians have been excellent partners in the Typhoon programme and the worksharing on that project was a good blueprint for other aircraft projects. However: The UK’s soft spine approach to our so called American friends has once again made us look rather slow and stupid. The Yanks as always are now showing their true colours when money is involved. That isn’t a criticism of them its as a result of us not buttoning every dot and comma down years ago. “Want our development cash and capabilities Mr LM? Well then outside the USA… Read more »

How easy is it to relocate some of this maintenance stuff? I wonder whether any of these decisions might get re-visited, e.g. if Italy cut back on its purchase plans (it does have serious economic and budget issues) and/or if the relationship with Turkey became more problematic. The win-win for the UK would be to expand & accelerate our F-35 buys in return for more local facilities but that is fantasy land I fear, my view is that it will be somewhat of a miracle if, 5 or 10 years down the line, we are still sticking to the current… Read more »

Julian – the MoD should tell Washington (and this Pratt & Whitney) they have two options: Either we maintain our own engines (or they are sent to the USA) or we fit the F136 and do our own engines. There is NO way we should be entertaining doing business with a country that every day looks more and more like a dictatorship. And another question that astounds me is this: If the F135 is so ‘state of the art’ how can a country, with combat engine experience of only the F-16, be able to offer reliable maintenance? Some senior FAA… Read more »

Indeed. The UK seems to be a few opening demands short of a full negotiating team.

dadsarmy – Looks like the Italians have found a few internal strings to pull. They put in next to no funding, little design and development, cut their expected orders in half and get a FACO and lifelong heavy maintenance contracts in return.

I know. I can’t help thinking that, as the sole tier 1 partner with not only the biggest planned purchase in Europe but also the partner putting in the lion’s share of the partners’ contributions to up-front development costs ($2.5bn vs Italy as next biggest at $1bn), we should have negotiated a bit more in-country stuff. Does anyone know how much of the European maintenance is going to be based in the UK? Ultimately that’s probably more important. The air frame gets assembled once but thereafter is around for decades and requiring a lot of maintenance over its life. The… Read more »

Chris – I see you just answered my question re maintenance. Deeply, deeply disappointing. I agree with your sentiments.

It’ll not work in the rain though.

Makes you want to cry…the sheer lack of oversight by the UK and senior military personnel.
uk should definetly have a F35 production site and be able to maintain engines. Not sure relying on Turkey at this time is a sound strategic decision.
Also not sure Italy should qualify for an f35 production sites when their order will be less than half the UKs final production run.
hmm something else HMG have lost sight on. Not filling me with much hope for the future when howlers like this keep happening.

WTF? How in hell did Italy become a prime partner? Unlike many on here I have no combat/MOD experience but – what the hell?

I do believe the F35 will become the defacto choice of NATO. I do believe it will be, in time, an awesome aircraft.

I also believe we are being shafted by the USA – possibly as a result of Brexit.

Whether or not we are being shafted, it’s got sod all to do with Brexit….

John, this was known long before Brexit

Yeah. It was all decided ages ago. Nothing to do with Brexit. One problem is that we are such minnows compared to the US when it comes to military resources and development budgets that we don’t have a strong bargaining position when entering into joint development agreements. The only NATO country that has done a good job of funding enough local in-country development to build complete systems is France (e.g. Rafale). OK, they’re not 100% for MBDA, Thales etc but very strong in those partnerships. Ultimately that’s the only real way to avoid getting shafted by a much bigger partner.… Read more »

What rubbish blame Brexit we build the Euro fighter Typhoon with Germany,Italy and Spain because the powers that be say we can’t afford to build it on our own yet the French
build the Rafale on there own and have done a pretty good job of exporting it Sweden Saab manage to also build a fighter and export it we give our technology away no wonder the UK aircraft industry is now a components based manufacturing.

Stockholm syndrome! As the wolrd’s only geo political and super power America hedges its bets. Its a ruthless country. Only money and real politic matters in Washington. Anyone who thinks anything else is away with the fairies. How well the MoD did, who knows. There’s a brilliant article on defence one which should be mandatory reading (and weeping)

Didn’t the UK get the F35 avionics maintenance facility? To be based at Sealand?

Apparently yes it did: