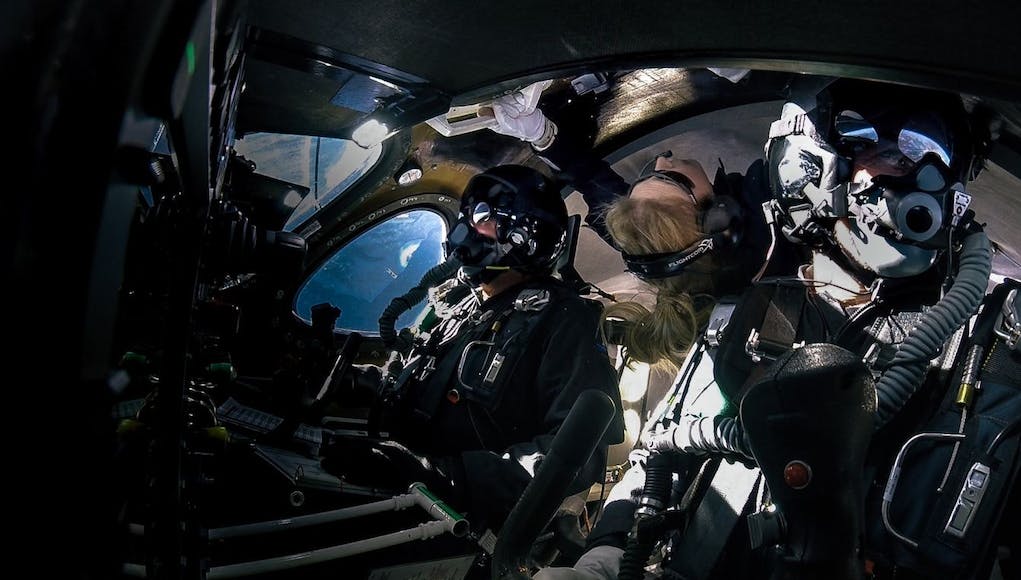 A former Royal Air Force Harrier pilot has become the UK’s first commercial astronaut when he flew into space aboard the Virgin Space Ship Unity, say the RAF.

“He flew into space on the 22 February, when Virgin Galactic’s VSS Unity makes its second successful flight into space above California.  Dave has therefore become the became the 569th human in space and the first Scottish-born astronaut.

Before becoming an astronaut, Dave joined the RAF in 1979 and spent 16 years in the Service, flying the Harriers.  He was also a test pilot at Boscombe Down and was awarded the Air Force Cross in 1992.  On leaving the RAF he joined Virgin Atlantic in 1995 as a commercial pilot and then moved to Virgin Galactic in 2009.”

“I am incredibly proud of my crew and the amazing teams at Virgin Galactic and The Spaceship Company for providing a vehicle and an operation which means we can fly confidently and safely. For the three of us today this was the fulfilment of lifelong ambitions.”

Following re-entry and a glide back home, Dave and his crew mates were met after landing by Virgin staff and a kilted piper say the RAF.

You’ve made me re read it twice!!

“To and Becomes”, It’s one or the other.

A typo, clearly, but thank you for that.

Sorry George, It’s a nasty habit of mine !

Or reverse polarity, that solves every problem.

That is quite a CV!

Also, that aircraft looks like the love child of Concorde, a P-38 Lightning, and a 1950/60s commercial jet.

Not something I have studied but I believe it has a huge wingspan.

Being serious though (For the second time this year) Gerry Anderson and his Wife were absolute Geniuses, If you actually look back at all their Considerable Inventions/Ideas/Predictions/Productions and plain and simple Predictions, They were Unbelievably ahead of their time.

We also see similar comparisons from the Minds of Carl Sagan, Gerry Bruckheimer and James Cameron of “Terminator” fame.

Not to mention the bloke what rote Star Track. !!!!!

it’s what my Wife calls It, Drives me Insane.

I was in the ATC with his son, Duncan. Small world.

‘I’m surprised that there was no comment about the guy’s age’. Hopefully that little lesson has been learnt.