RFA Fort Rosalie is currently assigned to the USS Theodore Roosevelt Carrier Strike Group in the Middle East and is supporting efforts against Islamic State.

The US Strike Group takes fuel from the USNS Guadalupe, and food, spare parts, mail and other supplies from the British auxiliary say the Royal Navy in a release.

“It was a very satisfying day for us as Fort Rosalie successfully completed simultaneous high-tempo transfers from both the replenishment at sea point and the flight deck,” said Fort Rosalie’s Commanding Officer Capt Karl Woodfield RFA.

“There was a real buzz around the ship after we finished and a great start to our period of support to US Carrier Strike Group.” 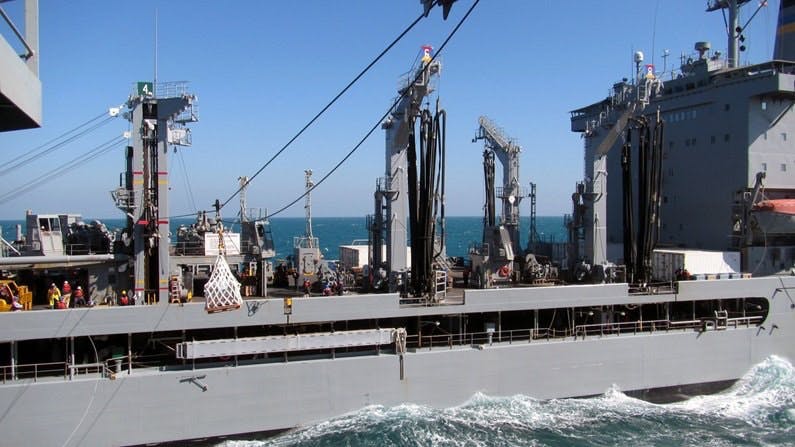 “The vertical replenishment saw Fort Rosalie’s crew put into practice training received from the USNS Matthew Perry last month, with the slick transfer of 48 loads by Bunker Hill’s MH-60 Seahawk helicopter. The Fort Rosalie team integrated with the US crew and were involved in a range of training from load building and movement, to a steering gear breakdown drill.

Fort Rosalie’s solid support team trained in US vertical replenishment procedures, working closely with their US crews by making up equipment loads and attaching them to the helicopters.”

“This was one of the most beneficial exercises I have participated in during my numerous deployments to the Middle East,” said Petty Officer (Supply Chain) David Hinde, one of the seven Brits who joined the Perry.

“We assisted in preparing 500 pallets of stores for despatch to the Roosevelt and Bunker Hill with personnel from Fort Rosalie also involved in flight deck operations.”