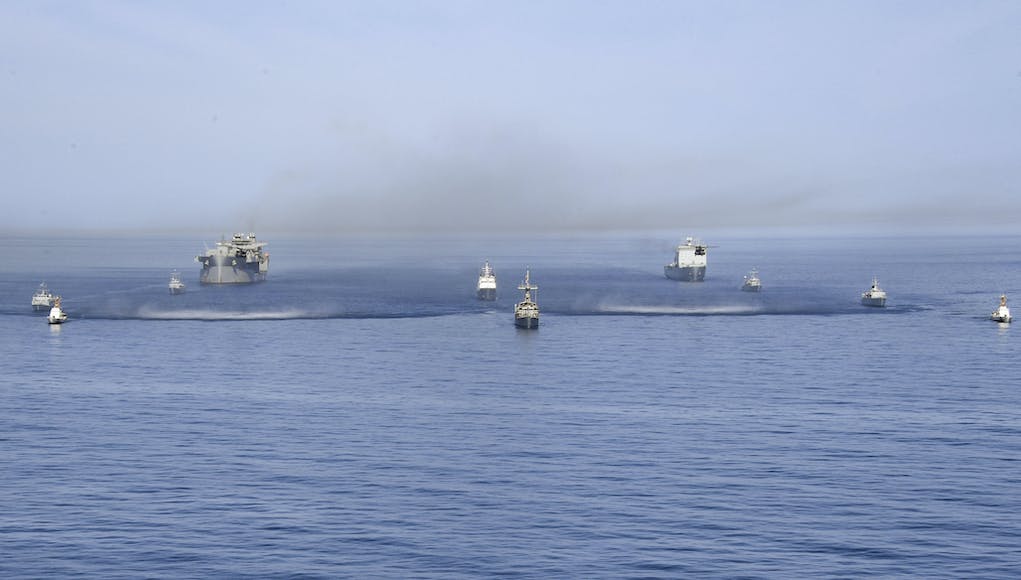 France’s Marine Nationale, the United Kingdom’s Royal Navy and the US Navy completed the US 5th Fleet mine countermeasures exercise Artemis Trident 19 in the Arabian Gulf.

The scenario for the exercise was for coalition forces to provide safe passage to humanitarian relief vessels through a mined area.

“Mines threaten maritime traffic indiscriminately,” US Navy Capt. Jeffrey Morganthaler, Commodore of Task Force 52 and lead for the exercise, said in a release.

“Training together ensures we can collectively protect unfettered operations of naval and support vessels, as well as commercial shipping movements, throughout the maritime domain.”

In the fictional scenario, 70 nautical miles of channels and routes were cleared for simulated shipping using multiple, integrated sensors. Geographically dispersed forces practiced choke point clearance and harbor breakout according to the US Navy.

As part of the exercise, FS L’Aigle and HMS Ledbury simultaneously rafted with the RFA Cardigan Bay.

RFA Cardigan Bay’s support increased the endurance of the mine hunters, demonstrating how a multinational force could conduct sustainment and repairs during extended mine clearance operations.

In another scenario, six of the ships practiced collective self-defense, working together to defend themselves from simulated air and surface threats.

“The exercise has been a highlight in our current deployment, and it exemplifies how we are stronger together, in an area that is so complex,” said France’s Marine Nationale Lt. Pierre, mine clearance diving officer aboard FS L’Aigle.

“France deploys MCM vessels on a regular basis to the Arabian Gulf, to maintain expertise of the local environment, and I am looking forward to the next exercise.”

I’m surprised America only has a dozen mine hunters/sweepers. You would think they had more with the size of there fleet. Her majesty’s naval service has around 184 ships and we have 13 mine hunters, USA has 460+ ships in its wider fleet and only has 12.

Current lack of inventory is because of the 90s draw down and the idiots who support the LCS program arguing it could be done with a module.

Yeah and it looks like America will use its littoral ships for MCM in future.

If I recall, the Independence class LCS variant will be used as the dedicated minehunters of that type.

The US sent a quarter of the Iranian navy to the sea bottom during the Iran-Iraq war in one afternoon when one of their ships hit an Iranian mine.

The assumption is that no sane power would do it. So mine hunters are not a priority for the US.

Also the USN preferred to use helicopters for mine warfare for a long time, especially the CH-53

Cam my man 184 ships in the RN? That was 1959 AD bro this is 2019 there are 74 commissioned ships . As for the yanks they have currently 261 commissioned ships. I thought for a moment I was reading the sky news website reading your comment ?Fake news it’s everywhere ?

He said the ‘Naval Service’ not just the RN, but I would quite like to know where 184 came from as well, are you including Serco and RM landing craft in that Cam??
Also in 1959 there would of been a hell of a lot more than 184 ships in the RN alone, you could probably double that number!

The total displacement of HM Naval Service and the Royal Fleet Auxiliary is approximately 778,000 tonn, there you go mate.

Including the RFA there’s probably north of 100 ships in the naval service, by far the largest in Europe

There are 74 commissioned ships in the RN and 12 RFA ships. And the French navy’s actually bigger in numbers than the Royal Navy mate.

That’s her “Majesty’s naval service” not Royal Navy, so that’s the Royal marines craft the RFA , serco and Royal Navy.

That’ll be “boats” your talking about then I’m on about “ships” of the fleet . Don’t take my word for it you can look the list of “ships” up yourself . 74 + 17 everything else boats and wee inflatable canoes ?

Also where you getting 17 RFA ships from? There 12.

“The American wider fleet” so with support ships ect it is actually around 460 so I was correct, I love both navy’s and know what ships they have lol…

Tomatoe tomato ?? no sense falling out over it . Respect. Oh and RFA 12 + 5 vessels as part of PFI arrangement (point class etc etc)

Ah yeah the point class, we have chartered tankers also but it’s a shame we got rid of RFA orangeleaf!. I agree let’s not fall out over stupid stuff?. Im off fishing catch you later m8?

The countries that should be patrolling the Gulf should be Saudi Arabia, Kuwait and the UAE whose vital waters they comprise.

The ‘coalition of the willing’ Shouldn’t get dragged into any war with Iran nor prop up heavily armed Gulf states whose armed forces are only good at commiting human rights violations against unarmed civilians rather than the technical aspects of their war fighting capability like mine clearance.

Actually the RSNF are quite good at mine clearance . They have UK supplied Sandowns that have just been extensively modernised.
The CTFs in the area (150, 151 and 152) all have different objectives.

Did not realise the Frenchies sent mcm vessels to this neck of the woods. Anyone know how routine this is?
Also, I was surprised by the combination and type of us ships used.

The French are mostly operating from UAE or Qatar. As for the combination of vessels the Puller is a big ugly ship but ideal for a floating airfeild and boat support base. Cardigan has lots of deck stowage for Remote operated boats and accom for the MCMV battle staff.
UK , French and USN MCMV vessel all bring different specialisations to the party. The USN vessels can sweep ( the UK cannot any more)and the UK and French can hunt better than the USN.