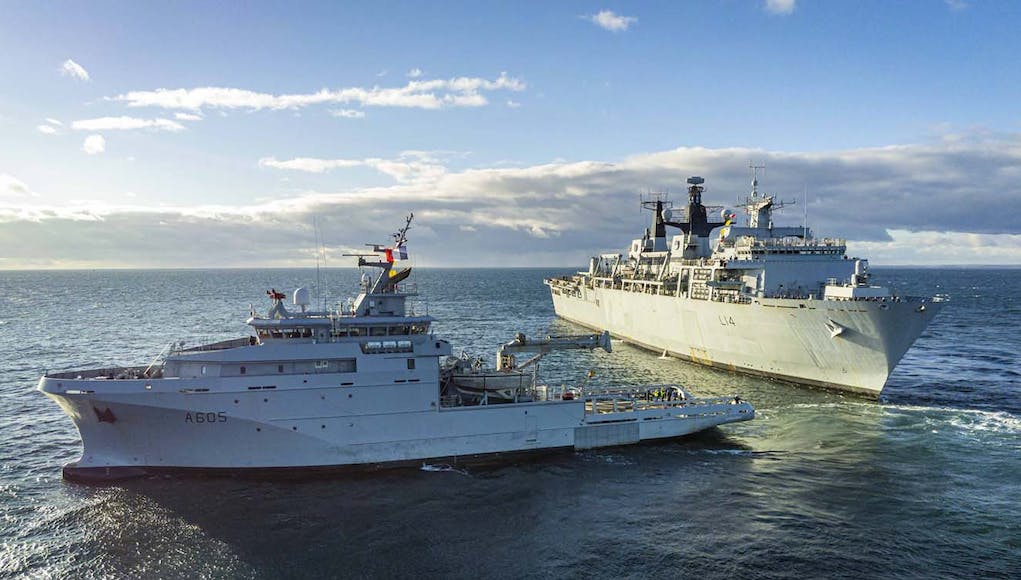 Don’t worry, the FS Garonne hauled HMS Albion to assess its pulling strength and abilities as part of a testing exercise.

The Garonne is one of four new specialist Loire-class support ships built for the French Navy designed to provide a multitude of services, from supporting diving operations and dealing with pollution in the aftermath of a spillage at sea, to assisting submarines and surface ships, including salvage operations. “With HMS Queen Elizabeth deployed and her sister Prince of Wales undergoing maintenance in Portsmouth Naval Base, the next largest British warship HMS Albion – 18,500 tonnes, 176 metres long, 29 wide – acted as the ‘breakdown victim’ to test the Garonne’s towing ability.

The Plymouth-based amphibious assault ship pretended to be dead in the water in the Channel – with the Garonne throwing her a line, figuratively and physically. From the British side, the complex seamanship exercise was overseen by the MoD’s Salvage and Marine Operations (SALMO) team which provides salvage, towing, and heavy lift capability.” “Our French Naval counterparts are highly skilled and professional – it was a delight working with them. The ability to integrate quickly and effectively with international partners is a key component to operating as a global navy, supporting global Britain.”

Before participating in the Towing Exercise, Garonne carried out intensive trials and training to prove her ability to work with NATO’s Submarine Rescue System (NSRS). The jointly owned UK, French and Norwegian system is capable of diving down to a submarine in distress, docking with the escape hatches and carrying out an evacuation.

Yes, I admit, I was aghast when I first read it. Come on, who else?

Me too! So it’s not a cunning plan by the RN to cut carbon emissions?!?! Net-zero and all that! ﻿😆﻿ Get the French to tow us!

Perfide albion! That was the plan, reduce your gas consumption by asking for a french towing ?

There’s nothing like a bit of Russian roleplay to get the blood pumping.

It’s a good headline. It makes you read the piece pretty damn quickly.

I was more confused than anything. It was the “through the Channel” bit that threw me off, didn’t make sense if Albion had broken down and wouldn’t it be done by our own tugs if so? To be honest it seemed a bit clickbait which also was a bit weird for this site imo.

No, had it as tongue in cheek – but still checked!

Morning Daniele. As I was reading the headline I was thinking-late April Fools/ Something to do with Father Christmas? The shame of it! And then realised that mischievous George was having us on!﻿😆﻿
Vive L’Entente Cordiale!!

I’ve said it before, but it’s good to see.

Nothing to do with this, but my exasperation finally needs an outlet over the latest gobsmack from our collective representatives.
Whilst the Royal Navy are doing their utmost to promote Global Britain, on our behalf & allegedly that of Westminster’s, our parliamentarians of all persuasions, including Head Honcho, embarrass us with with barely disguised sleaze, corruption and now talk of drunken behaviour directly associated with military commemorations.

Just read that, the Labour MP was so drunk she needed a wheelchair to take her off the plane. In her defence she did say it wasn’t the 5 drinks she had, but rather the medication she was on for her predicament . The 2 SNP MPs are naturally blaming the tories for getting sloshed.

I trust I’m too old and have read too much economic & political history to be that naive on the subject, F. Where there’s the opportunity for dominance & corruption it has always materialised to a greater or lesser extent. Though greater is getting more prevalent; you can observe the growing unbridled contempt among these ‘ruling classes’. In this country the ultimate epitome is most clearly evidenced among the ‘Lords’ and those that place them there for a few bob – the modern Rotten Boroughs, effectively. The UK is still a standard bearer for Democratic process, of course, but that’s… Read more »

Morning Farouk. Yes a bloody disgrace and to top it,could there be anything more inappropriate than to send two ScotNats to a very British part of the globe. Obviously if Scotland were to leave the UK we would continue to jointly recognise the huge contribution that Scots made to the war effort and no disrespect whatsoever BUT Gibraltar takes great pride in her links with the United Kingdom so why send men who wish to destroy it?
Bad choice all round

We could use a couple of similar ships ourselves….

RFA Diligence !! think she is still in Portsmouth awaiting disposal 🙁 another gapped capability.

Im sure there are plenty of newer oil exploration type boats which could be brought cheap…. or we could build something (insert rant regarding National Flagship here)

With the foreign basing nowadays and using civilian shipyards there is little use and it certainly isn’t cost effective for something like Dilly anymore.

Afloat support in time of conflict get a STUFT and stick FSU containers on it.

We did have a couple of big ocean going tugs as part of the RMAS… Cannot remember the names as it was so long ago but one was always around Portland.
Any ideas??

I have lots of tugs listed as being operated by SD, no idea which you would mean though.

Then of course you have the Northern River and Victoria.

Purchase the Nikolay Chiker from Russia, they might not require it any longer!

I remember the four tugs that wore the colours of the MCA – they were based in various locations in the UK until 2011.

The RMAS had the Typhoon class if that helps.

We can thank Mr. Cameron for the loss of those ships. ﻿😣﻿

Anglian Princess, Monarch, Sovereign and Prince were the MCA tugs. Coalition government got rid of them to save costs. Anglian Princess knocked around between Falmouth and Plymouth.

Roysterer Class operated by RMAS, I think the were all sold off by the late 90’s. They were over 1000 tons. SD Tempest is the biggest tug in service at the moment I think

I remember in cadets we got to all have a go driving one on a trip from portland to weymouth harbour….. bet Serco dont let you do that anymore….

Rollicker… That was it… Great name for a boat…

Phil the Fuel
Reply to  Gunbuster

When i left the RN in 87, i joined RMAS in 88 the Rollicker and her sisters use to roll on wet grass. SW/NW approaches were no fun in the winter.

The CSB crew I belonged to, were invited for a huge piss up on the Rollicker for all the help we had given them during their time in the falklands. Fantastic bunch of lads.

Speak of the devil… I just found this: 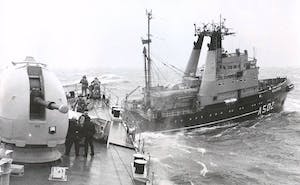 Now I am nostalgic.
Towex with a T42, An original MK8, old style Pussers foulies HDLJ’s ready to auto inflate when you get goffered and those really carp orange immersion suits that they used to have.

I would have been , like a good WE, in the mess watching a video…Not a DVD but a proper VHS as this photo is before they where invented!

You thought of a great “hook” for that story!

You could tow a lot of dingies with that ship…..

I’ll just leave that idea there…

Have you ever seen a multi plat tow rope part !!!!!! If you get my drift heads would roll

wow i thought it was the Russians again !

I know it was an exercise but the optics of this at this time are going to make daily mail and daily express readers very heated up.
Embarrasingly the RFA has lost its forward repair and engineeribg capability. Id much rather a couple of those vessels be built to a suitable multi role design then a £250 million Boris Johnson holiday yacht.

Allies continue to work together in a professional manner while their respective political masters continue to embarrass their countries on both sides of the channel. Shameful

What a beautiful world, at least for Europe.

Hi folks hope all is well.
Must admit I was shocked at first glance.
As a side issue can any of you experts please advise me how France has more military numbers and assets in all three branches than the UK with less defence budget?
Upon checking the current NATO defence budgets for each nation:
France sits at 50,97 BUSD, the UK at 69,082 BUSD.
For example the UK also
appears to have less fighter jets, although France has many old Mirage.
Many thanks,
George

For the budget, all countries doesnt have the same base calculations.
I dont think with have such a difference between us, we (France) probably spend more in fact.
From a french list I see: France 50B$, UK 48.7B$

The M2000 is perfect for hunt these Toyota in the desert, and always a great threat in the skies with the MICA. “Just” half the cost of a Raffy:

Morning George. The RN has a disproportionally larger budget than the French navy. Also the French army has a larger number of legacy helos than the AAC.

Does that us$69 b include the UK foreign aid as that would skew the picture somewhat? I wonder if some of those legacy Mirage 2000s are likely to be in storage?

No. Foreign Aid is a seperate Dept. FCDO.

The next CSG deployment should have a tug deployed as well to help out when the assigned T45 brakes down.

Ladbrooks the Bookmakers are stating odds even on T45s Breaking down and 1000 to 1 on going the whole deployment without incident. Steve if your a betting man

Makes a change from them towing migrant boats to the UK…

The French have a ‘Revier’ class too! Cool.

Perhaps the Garron can tow the sail boat…

Big force protection issue though letting something get that close that you hit it!

I liked the comment: damages are limited to the sailboat.