Home Sea Funding allocated for next batch of Type 26 Frigates 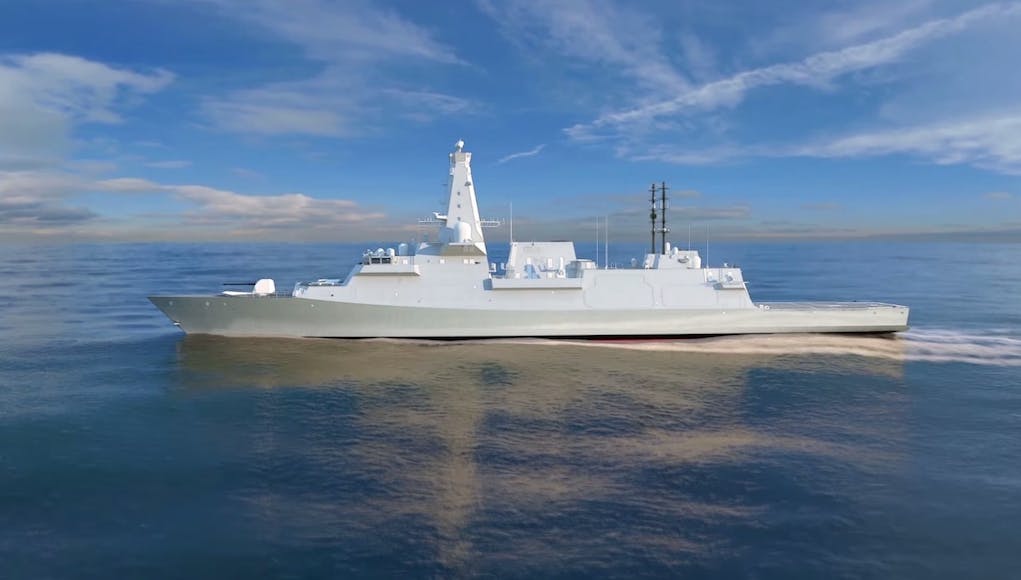 The Ministry of Defence has confirmed that resources have been allocated for the next batch of five Type 26 Frigates to be ordered on the Clyde.

It’s also understood that a signfiicant number of long-lead items have been ordered for the last 5 of 8 Type 26 Frigates. In addition, work is soon to start on the build of five Type 31 Frigates at Rosyth.

The information came to light in response to a written question submitted in the House of Lords.

“To ask Her Majesty’s Government what plans they have to ring fence money for the next five Type 26 frigates in the forthcoming spending review.”

Baroness Goldie, Minister of State for the Ministry of Defence, responded:

“Resources have been allocated by the Ministry of Defence to build and support the next five Type 26 Frigates. Funding lines are continually reviewed as part of routine programme management to ensure value for money is maximised for the taxpayer, drive the schedule and manage risk and opportunity.”

Additionally, the procurement of the Batch 2 Type 26 Frigates is expected to happen “in the early 2020s” according to the Government.

Luke Pollard, the Shadow Secretary of State for Environment, Food and Rural Affairs recently asked via a written Parliamentary question:

“To ask the Secretary of State for Defence, when he plans to order the next batch of Type 26 frigates.”

Pollard was directed to a statement made earlier in the year by Baroness Goldie which states:

“The procurement of the Batch 2 Type 26 Frigates will be subject to a separate approval and contract which is expected to be awarded in the early 2020s.”

Eight Type 26 Frigates are to be built in total with three in the first batch.

Last year, the next batch of Type 26 Frigate propulsion motors were ordered. At the same time Nadia Savage, director of the Type 26 programme, was quoted as saying:

“We will enter into the negotiation phase in the next 18 to 20 months. As we progress through the maturity of the design, it allows us to commit to the next batch and the timeframe around them.”

Any spare money around for another 1-2 T26s?

Even if they did it is unlikely they would be built. With growing threats we need more ships (even 18 frigates isnt enough… let alone the 10-11 RN has now) and we simply can’t afford many Type 26s. I’m hoping they will reconsider the Type 31 armament, and depending on what the Type 32s end out to be they will build either a few more upgraded Type 31s or more Type 32s.

18months to 2 years to negotiate a contract. Good grief.

For a circa £5-6bn contract for 5 ships – I’m happy they’re taking their time over it. But 2 years does seem excessive!

Nobody dies of hard work, working for MOD or BAE.

Really exciting times for the RN, this commitment ensures these fine ladies of the seas will get built.

The real decision to cap the number of ASW frigates to 8 vessels, was taken in 2004. The MoD decided at that time, to have only 8 T23’s fitted with the new sonar array 2087, and to sell 3 T23’s out of 16 built.
Other non-TAS frigates could do ASW taskings, if deployed with Merlin’s, but the limited number of cabs is the issue again.

Since that time Russian submarine activity has increased considerably!

All T 23 have an active sonar and can do Asw. Those without Merlin have a Wildcat and can carry out MATCH attack. They also all have MTLS.
Russian sub activity is far less now than during the early years of the T23 coming into service.

Yes but there wasn’t a powerful Chinese navy to deal with back then that is now producing ships and subs at an alarming rate.

And how often have the RN had encounters with the Chinese navy in the past 5 years outside of the SCS?

Good news. I always thought there was a chance they might cut the Batch 2 to just 3 ships and say the final pair will be ordered in due course. Which of course, as with the T45, never happens.

Good. Will these ships have design differences compared to the Batch 1? Like The Type 22? Mind you, those ships never got replaced…

Hi Goldilocks, That’s a good question to which I have not heard anything mentioned. One possibility is that the USN is looking to develop a new VLS that would be capable of launching larger weapons than the current MK41’s. I have read that this could be a future option for the new UK / French SSM which could be quite large so provision for upgrading to any new VLS might be included – although I would think it unlikely. Another, possible area for upgrade would be in the ships ability to handle autonomous vehicles as that appears to be an… Read more »

Maybe time for the UK and France to develop Virginia Playload Module like VLS to give flexibility to size of missile launched by VLS on Subs and surface vessels.

The extra money for defence in action along with the armament improvements seen so far. More to come I’m sure.

The MoD just cut 100s of millions from the Tempest program. Not a good trend.

Article to show us this news??

Robert, try Jane’s defence weekly, I read same article, I believe they have capped spending at a certain level, effectively cutting some £380 million from the Tempest budget!!!!

Cut from that but spending on other stuff now, how is that not a good trend?

The concept phase has spent less then expected, which was up to £2Bn. The actual engineering project on Tempest may begin next year.

Shame we will have only 50% of the boats the Aussies and Canucks are looking at.

They need to revitalise their entire fleets, as far as I know, whereas we are simply replacing vessels in due course. Of course they also have no carriers or nuclear subs to consider as part of their budget, so can afford to go a bit crazy, by comparison, with frigate numbers.

Tis true….mentioned by someone else the points re carriers and nukes….both have plenty coast as well bought id have thought they might buy a few T26s and be interested more in T31s/32s to cover their coast.

I’m struggling with my maths here.
The RCN is getting max 15 CSCs
The RAN is getting 9 Hunters
The RN is getting 8 City’s, 5 Inspirations, and 5 Type 32’s by current counts.
So in Frigate terms how is the RN getting “half” of either of those navies? The RN alone is almost getting as many ships as the RAN and RCN combined.

Nope. 15 for the RCN, 9 for the RAN and 8 for the RN.
Very arbitrary to only count the City class if you are talking about Frigate construction, since the RN is getting 13 new frigates minimum, possibly 17 so you’re cherry picking data.

Talking of boats… I’m quite concerned at our rather small number of Astutes. Aussies are getting 12 subs (even if non-nuclear) and I’m worried that we’re using our SSNs for purposes that might not require such a capable boat. Getting 6 Astutes and 6-8 or so German or Swedish AIPs might have been better for our budget.

Similar to T26s if we can’t afford the numbers of top end kit we would like then we need to be smart on numbers. Don’t want T26s doing basic duties same for astute. It’s a numbers game but as ever we need to get better bang for our bucks as we spend plenty….do we spend it well ??? Our procurement must be amongst the least efficient depts out there

With 73B defence expenditure we still have a pretty big budget… and as far as I can see the bigger the budget the easier it is to waste it. Zumwalt and F-22 comes to mind… USN has settled for FREMM so maybe it would be a good idea for us to buy some stuff off the shelf rather than insisting on building everything in the U.K. Then again, there is the question of jobs.

In related news speculation that the Army’s Ajax programme is for the chop.

May have a fair point there David 🤔