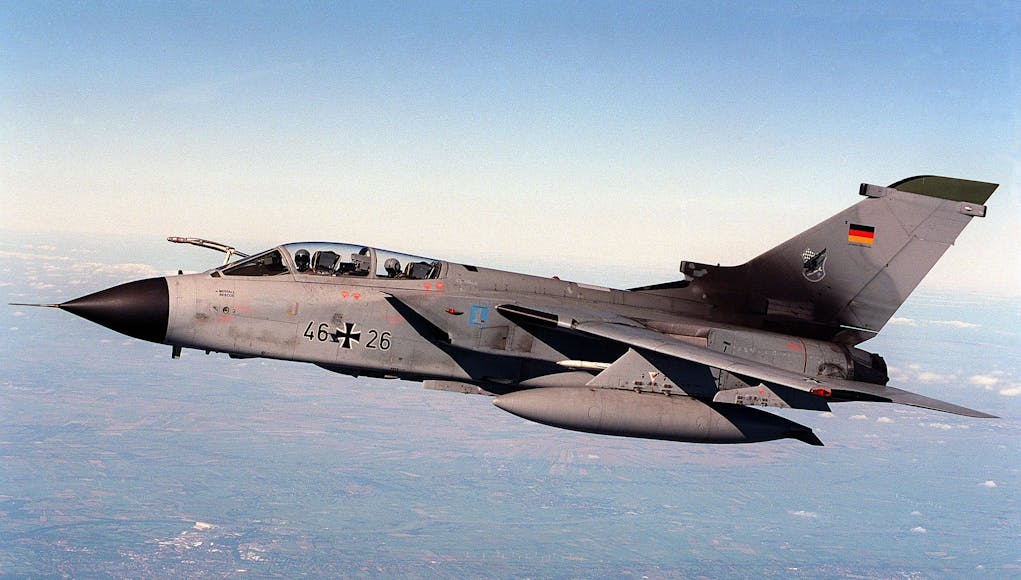 We understand that issues with personnel numbers and delays in equipment certification are to blame.

According to local media, the problem is two part: Firstly, the current lights used by displays “are not suited for night-vision mode”, meaning pilots would be blinded by them should they use light enhancing goggle.

Secondly, it has been reported that certification officials are unsure they can obtain documentation from the goggles producer that would be required for a fleet-wide approval, according to DefenseNews.

The report, first cited by the German magazine Spiegel, says the Panavia Tornado, which first entered service in the 1970s, has several equipment flaws that make it vulnerable and no longer suitable for duty. The fleet of fighter jets needs costly modernisation if Germany wants to keep them operational until 2035, as it plans.

According to news site Frankfurter Allgemeine, this was noticed during a routine check last Monday:

“The tolerance values ​​are minimally exceeded,” said Colonel Kristof Conrath of the Tactical Air Force Squadron 51. “It’s not that the aircraft would fall from the sky. For safety reasons, all tanks of the aircraft must be flushed.”

It is understood that this breakdown is particularly annoying for the Luftwaffe, as training of new Tornado pilots is already three months behind. This comes after we reported that The German military is under-equipped to take on its upcoming role as leader of NATO’s Russian-aimed Very High Readiness Joint Task Force.

The Bundeswehr is due to take over leadership of NATO’s multinational Very High Readiness Joint Task Force (VJTF) at the start of next year, but doesn’t have enough tanks, a leaked Defence Ministry document said. Specifically, the Bundeswehr’s ninth tank brigade in Münster only has nine operational Leopard 2 tanks — even though it promised to have 44 ready for the VJTF — and only three of the promised 14 Marder armored infantry vehicles.

The paper also revealed the reason for this shortfall: a lack of spare parts and the high cost and time needed to maintain the vehicles. It added that it was also lacking night-vision equipment, automatic grenade launchers, winter clothing and body armor.

The German air force is also struggling to cover its NATO duties, the document revealed. The Luftwaffe’s main forces — the Eurofighter and Tornado fighter jets and its CH-53 transport helicopters — are only available for use an average of four months a year — the rest of the time the aircraft are grounded for repairs and rearmament.

Good God,the German military seems to have ground to a halt.

the germans have had, and operated tornado for years, i can’t believe these issues are new if they are then the german forces are well below the level nato would believe

A great help they would be in a crisis then. I guess German foreign policy must be to just leave any intervention to the US and the usual round of allies regardless of where it is or who it affects. Not very responsible.

What makes this story even more depressing, is how the Chief of the Luftwaffe (Lieutenant General Karl Müllner) was forced to fall on his sword 2 days after Ursula von der Leyen, was sworn in for another term as Defence minister His crime he threw his hat into the ring regards the F35 as opposed to her money saving ways of purchasing more EF2000 (The Germans won’t call the Typhoon, the Typhoon) in which to replace the Tornado. With all the issues that have surfaced regards the German Military during her tenure, she takes incompetence to a new level.

Clearly, we are not the only NATO country failing to invest in our armed forces at a time when we could be facing a very real and serious threat. I recall after the Falklands war reading that we would never allow our armed services and troop numbers drop to a level where we could not defend ourselves adequately. I don’t think the term lol was around then, a bit like the numbers required now! Quote from today. “A retired Russian General has told Sky News we are “very close” to nuclear war Lt Gen Evgeny Buzhinsky told Dermot Murnaghan that… Read more »

I do not deny the gravity of the situation, but these days one has to take Russian pronouncements with a pinch of salt. They take exaggeration to a completely dimension.

post falklands the defence budget briefly rose to 5%, we should be endeavoring to do so again. i’d expect this syria thing will highlight just how empty the equipment shelf is.

In the Cold War the NATO Tornado force was to operate mostly at night hitting Warsaw Pact targets and now they cannot even fly at Night!

I agree Daniele, the German Tornados can’t even fly at night while the RAF are flying strike missions against IS night and day using Tornados and Typhoons.
Time that Germany matched our level of spending on defence.

Absolutely shocking that the German military has been allowed to atrophy over a 20 year period.
They are an economic powerhouse and they are failing in their agreed duty to Nato. They are spending around half of the agreed 2% of GDP. Its high time Nato forced the issue and told them to pay up for their collective defence obligations or get out.

not so shocking when you compare it to the rest of europe since the fall of the soviet union….. since the “peace dividend” at the end of the cold war defense spending hasn’t been a vote winner, especially as the older generations that actually lived through war started to die out… you raise the prospect of defense spending to most younger people and they think its a waste of money and should go on the nhs… Joe public doesn’t understand geopolitical realities till there are bombs falling on their heads… then they run around screaming looking for someone to blame.… Read more »

Evening A sad state of affairs, not just for the German military but for the pilots who want to fly what is still a very useful platform for deploying weapons. It goes to show what, with the correct investment and careful management of an aircraft you can do with it 45 years after it was first conceived. Whilst I am disappointed that the RAF are now beginning to draw down the remaining Tornado force it is still being used today – as an all weather day and night weapon system, deploying the latest weapon systems in the U.K. arsenal to… Read more »

Evening Lee. There’s a massive difference between our Tornado GR4s and the Luftwaffe Tornados. For starters our aircraft are at least 3 times higher in the airframe lives. Due to operations in Bosnia, Iraq, Afghanistan and Iraq again. They have used a significant chunk of their lives and cannot be extended further without serious structural rework. This is one of the main reasons that Typhoon is being prioritised with project centurion by integrating the Tornados weapon fit onto it. There may be a case where the RAF will look to buy more Typhoons as we are now burning through its… Read more »

Oops forgot to mention the GR4 modification puts the avionics a generation ahead of the Luftwaffe Tornados.

Morning DaveyB
Is there any technical reason the Germans diverged from the tech roadmap or was it just simply money and out utilisation of the Tonka that meant we had to but it through all the life improvement programmes we did?

I don’t think there was a multinational upgrade roadmap, if it had been planned it clearly didn’t survive the end of the Cold War. Production Tornado’s for the 3 nations were also slightly different, RAF jets gained LRMTS at an early stage and there were differences in weapons and EW systems. Even the original RAF GR4 upgrade was reduced in scope and size. As for German Tornado’s not being able to fly at night, I don’t think thats literally true as the Tornado has been able to fly and fight at night since coming off the production line.

It would be nice to see a top up order for RAF Typhoon but i doubt it will happen. I believe early Typhoon use was actually lower than expected as even after the austere upgrade was introduced it wasn’t roled out across the fleet due to money being diverted to Afghan Ops. Hence the need to rapidly train pilots in A2G during Op Ellamy(The RAF had only ever maintained a small cadre rather than training everyone).

If Germany is planning to retain the Tornado until 2035 there is an interesting 3rd way solution to upgrading and providing NVG compatible cockpits. The UK Tornado force is rapidly drawing down, for a relatively reasonable price they could buy and cannibalise systems from the UK fleet to allow a cockpit upgrade with NVG compatible systems.

Mark is correct with regards to the multinational upgrade path for Tornado. Unlike Typhoon where each partner Nation must mutually agree to the upgrade path, Tornado was left to each Nation’s whim. For some reason Germany decided to slow any developments on their aircraft. Unlike the UK which after the Gulf War saw a need to upgrade and develop the aircraft and the weapons it could use. A good example is the replacement of JP233 with Storm Shadow/Brimstone. Low level attacks on airfields was quickly discovered to be a stupid method of damaging runways. Therefore a standoff weapon was developed.… Read more »

I saw a headline earlier stating that merkel has decided not to partake in military action if it happens….. like the Germans could do anything worth while with the state of their armed forces anyway! Or is that the actual reason????

The myth of German competence again laid bare. When they are good they are very good but hell when they are bad they bring a whole new level of competency to being incompetent.

They don’t invest in their own forces yet build ships, vehicles for other nations !!

i’ve started digging the back lawn up to build a fall out shelter the wife is not a happy bunny.

[…] that’s a big part of the problem. Judging from Germany’s actions since the end of the Cold War, they certainly do seek dominance […]

[…] that’s a big part of the problem. Judging from Germany’s actions since the end of the Cold War, they certainly do seek […]