HMS Glasgow, the first Type 26 Frigate, is starting to look shipshape on the River Clyde.

In a series of fantastic images captured by @PaulJSweeney of HMS Glasgow in build at night, progress on the first in class frigate is very clear to see.

For a little bit of context, Paul Sweeney is a Scottish politician and was the Member of Parliament for Glasgow North East until the last election. More importantly for the purposes of a discussion on shipbuilding, he was formerly employed by BAE in Glasgow. Paul has worked with the APPG for Shipbuilding which published the results of inquiry into the Government’s National Shipbuilding Strategy, taking evidence from a range of maritime security stakeholders and industry. You can find Paul on Twitter here.

Nice to see both fwd and aft 'super blocks' of HMS Glasgow nearing structural completion in the Ship Block and Outfit Hall at Govan Shipyard. My first job after starting at the shipyard in 2011 was to do a feasibility study on how the Type 26 frigates would be built and launched. pic.twitter.com/k3AXH3omhA

Curious as to what you’re actually looking at? I’ve made a diagram explaining what you can see in the images.

The forward and aft sections will be joined together soon.

Paul was kind enough to send these images to me on Twitter, we hope you enjoy them.

Paul also said that the small block in foreground is the first section of the forward block of Ship 2 (the future HMS Cardiff) containing the auxiliary machinery rooms and sewage treatment plant. It’ll be fitted out with ‘lock-out’ machinery when in the hall then built up, Paul added.

The big picture from our block moves – progressing at pace for @RoyalNavy. #GlobalCombatShip #HMSGLASGOW #26on26. pic.twitter.com/THe8zmPCEH

The Type 26 represents the future backbone of the Royal Navy and eight of the class are planned, starting with HMS Glasgow. The eight ships will replace the eight dedicated anti-submarine Type 23 frigates which will reach the end of their active lives by the mid 2030s.

In addition to the Clyde built Type 26, five Rosyth built Type 31 general purpose frigates are intended to replace the general-purpose Type 23s currently in service and also coming towards the end of their long careers.

The actual mechanics of structurally bonding two sections (each of several hundred tonnes) of a ship together are interesting. How is rigidity maintained? It’s not Lego!

I believe the welds (joins) are actually stronger than the normal plating which is an amazing thing.

It is actually pretty vital that the welds have a similar compliance to the plating.

If the welds are stronger or stiffer than the plates (or stiffeners) then they act as a stress magnet and that can propagate the formation of micro cracking.

The ideal weld is pretty much indistinguishable from the plates.

So the stress concentrates on the weakest point adjacent to a stronger weld as opposed to spreading evenly if the weld is as per your last sentence? That calls for some pretty fine craftsmanship SB! We all from my generation anyway, lament the decline of ‘real’ tradesmen so nice to hear such skills still exist. When I was a youngster appies were in fear of their Journeyman and often got a clip around the earhole for misdemeanours 🙂

not to be the negative nelly but why on earth does it look like its made from wood?

Scottish yards now use a special type of Glue !

Derived from haggis and tizer

no, it’s Irn Bru & square sausage (with a touch of potato scone)

Irn Bru used as a solvent! Tatie bread is for eating!!

Not on Clydeside, maybe at Rosyth … 😉

Under the Plating there are Longitudinal Stiffners which form the Framework,when Sections are Joined these Slot into Place to Give Extra Strength,think of how a Brick Wall is Joined.

I find great pleasure watching and seeing ships go from concept to Launch. Ships from my childhood such as Type 21’s and the later 22’s, 23’s, 45’s, Rivers, QE’s, not to mention Subs. I remember talking to a chap about the Metrocentic (?) calculations being worked out for the QE’s years and years ago. Can’t wait to see this ship take to the water. Might have to take another little trip North. Well done to everyone involved you all do an amazing job. Rule Britannia.

Are we building one at a time?

Hello George, We are building Blocks again, so various Blocks are being constructed in order of program schedule …. you can see this above in the pics and in particular Glasgow’s and Cardiff’s blocks. The QE class were built this way too, as were many WW2 Ships to be fair but quicker.

I meant to say, are we building one ship at a time? Are the other shipyards busy making the export version of the T26?

Hi George – there is no export variant of the T26; the Australian and Canadian variants are being built domestically by BAE Systems Australia and Irving/Lockheed Martin respectively.

ok. this kinda discourages me from the navy. what if ship just snaps in half from a shockwave from a wave or something? i don’t want to die from being beaten to death by a wave. I would rather die from a missile hitting and sinking my ship.

Even with what doesn’t appear on the surface to be a resilient construction method they are infact incredibly robust so you are still more likely to be killed by a missile than the ship snapping in two on a large wave. They are designed to take that sort of punishment day in day out for 25 plus years and they check them regularly to make sure they are still sound as well. They build cruise liners using exactly the same way and there is a great film somewhere out on the internet of them slicing one in half amidships and… Read more »

This gives you an idea of what Iain mentioned below:
https://www.youtube.com/watch?v=QirVr-pEVU4

In a few months work on HMS Belfast will start so that will be 3 Type 26’s under Construction – work on the Australian and Canadian versions of it have not started yet.

It’s a shame that some work on Cardiff has to be done outside in the elements, instead of inside a assembly building like those in the photo. BAES could do with some more buildings there.

Looking at the progress of the Ship’s Construction i think all Blocks are Fabricated Inside,Buttoned up then moved Outside to make room for the next Block – your right that space seems to be at a Premium and this impacts on the most Critical Stage – ie the Joining of the Two Halfs of the Hull,which has to be done outside.Its a shame the’ Frigate Factory’ didn’t materialise as efficiencies may have resulted which could have increased the order to more than 8.

France cuts two nuclear-powered submarines in half to make one new one
https://edition.cnn.com/2021/04/14/europe/france-submarines-cut-in-half-intl-hnk-scli-ml/index.html

Wow ! That’s going to be complicated. fair play to them though.

The same could be done if the RN wanted to bring back back to life a cruiser or battleship, just slice off the obsolete sections you don’t want, and build and join new sections. e.g new modern engine section with hanger.

Will they have to rename her should Scotland leave the UK?

Yup, HMS krankie would be my guess…..

How about HMS Great Britain

ya wouldn’t be so great when the scots leave.

I was thinking HMS Hadrian?

I was thinking just the same thing!

Good to see some progress

Any of the nationalist media reporting on these?

I thought the Scots didn’t want anything to do with Britain anymore? haha

Predictably we already have some ‘triggered’ posters who can’t help themselves when Scotland (currently part of the UK) building warships is mentioned.

Its all very tragic, still on the bright side, hopefully all the huffing and puffing about it will generate a wee bit more advertising revenue for the site.

Most of it is just Humour, just a bit of friendly Banter that’s all mate.

Aye, some is mate but there are a couple that can’t help themselves when anything remotely Jock (like a warship being put together) is mentioned and dive down their personal rabbit hole of bitterness. Haters gonna hate I suppose.

..The only hate is coming from the Scottish electorate.

Sorry Mac, you’re maybe not putting your point across very well or maybe just be a bit dickish. Either way, that’s really not the case is it. There are a number of mainstream parties in Scotland that have different views on a range of subjects. Now I’m maybe wrong but I assume you mean wanting away from the UK. While we’re having an election next month, I can give you a cast iron guarantee that the Scottish electorate will continue to vote for a range of parties. It might keep things nice and simple (some people find life easy that… Read more »

Okay then, the only hate is coming from half (ish) the Scottish electorate..

Mostly the Glasgow Republican head banger crowd, who still after 300yrs, need to hate the English Bogeyman for all of Scotland’s ills.

I hope that helps.

“I hope that helps.”

Not really Mac, no. By all means paint yourself into the ‘Saint Diana, princess of hearts’ corner but its pretty safe to say that ‘hate’ isn’t a one way street.

Apart from that though mate, yeah, great logic and thanks for helping to make my original point.

Would we rename EDINBURGH if fish face got her way?

Is it just the hull, or are these fitted out with equipment? how much fitting out will happen after it’s launched?

Large machinery items will have been fitted in the hull. Small items fitted in later. 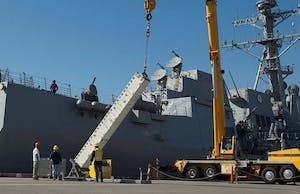