Unions GMB and Unite have called on the government to back the bid to build the Scilly Isles ferry and secure the future of Appledore Shipyard.

The yard is due to close on the 15th of March, in a move that will be a hammer blow to the North Devon community and to English shipbuilding its 200 strong workforce.

The closure of the yard, which has built 197 ships, was announced back in November, partly due to the uncertainty of the government deciding to pause the bidding process for its type 31e Frigates in July and also the failure of Babcock’s bids for other work.

The MoD said it had been forced to rethink the acquisition strategy for its Type 31e general-purpose frigate programme citing insufficient compliant bids for an effective and robust competition.

“The government has lost all direction and sense of priority. They fail to step in and support a historic industry but are happy to award contracts to a ferry company that contracts its staff with fast food terms and conditions.”

However in recent weeks the Government have awarded a £13.8m contract for ‘no-deal’ Brexit ferry services to a start-up company without a competitive process and that as yet does not own a single ferry, throwing up doubts about the government’s tender process.

Transport Secretary Chris Grayling told the BBC he would make no apologies for “supporting a new British business”. The contract award notice states this was due to “a situation of extreme urgency” in the run-up to the UK’s EU departure date.

Unions are now again calling for the government to apply the same level of support and award a contract to build a new Scilly Isles ferry. Last week the GMB Union held talks with Oil, Gas and Marine Ltd, a Company interested in taking over the site, but until there are orders in place, the company would be unable to get their proposals off the ground.

“It seems highly odd that the government can pick and choose when they don’t want to implement a tender process. The government say it’s a situation of extreme urgency, but what could be more urgent that one of the last English shipyards closing, a couple of weeks before Brexit.”

“I don’t know what’s more depressing, the fact that government clearly does not see the loss of hundreds of jobs and Millions of pounds from the North Devon economy as an emergency, or that they think awarding a vital contract to charter ferries to a company that doesn’t own a single ferry.

The government has lost all direction and sense of priority. They fail to step in and support a historic industry but are happy to award contracts to a ferry company that contracts its staff with fast food terms and conditions. We’re beyond the pale.”

“We have previously campaigned for the much-needed new Isles of Scilly ferry to be built at Appledore, and in light of their actions with the ‘no-deal’ Brexit ferries, unions see no reason whatsoever why Government can’t give the Scilly Isles group the interest-free loan they need to get this work started, which can then be done by Oil, Gas and Marine Ltd, a company we met with this week, or any new operator that comes forward, as their first order.

The loan for the last ferry was fully repaid, and this would tide Appledore over to enable more work to be lined up.

Talks are still at an early stage, and we don’t want to raise hopes, but currently Oil Gas and Marine Ltd are on common ground with our members about possible plans to diversify the yard to exploit new opportunities into general fabrication work as well as shipbuilding to give us the a long term, sustainable future for the yard. They just need a helping hand from the government to get started. Together we can still keep Appledore open, but 15 March is fast approaching.”

Do our Government even know where Appledore Is ? What a mess. The last Shipyard in England to build whole Warships.

Yes CPW, they do….they think that it is on the Belgian coast…somewhere near Dunkirk!!!

yes, why not? appledore was given the finger by the u.k and, looked at closure altogether. retaining skills,providing more jobs,makes far more sense than giving more work to the clde which, lets face it hardly produces at more than a snail pace 4 years to produce a river, then a contract for a warship talk about common sense, the clyde is lucky to get the work it has its the politics of the nation that his closed down places where warship building was a tradition(portsmouth, devonport, chatham to name just a few shows the clear decline and reasons for this… Read more »

I don’t always agree with the GMB but this time they have it right. It’s write to MP time again. Only takes ten minutes and it makes me feel better if nothing else!

Do you ever get replys from MPs? I was wanting to go see my MP about a proposal for the huge old ardesier oil rig building yard with a business man soon I’m just waiting for an email reply. But does writing get an actual reply from an MP then?

I’ve had several replies to e-mails from MPs. Some of them are printable! But don’t hold your breath. The longest I have experienced is when one of my students contacted Diane Abbot….she didn’t reply!!

They write to me more now that I write to them with their fancy embossed letter heads.
Always to tell me they have not managed to lower the tax on air duty I was asking them to change about 6 years ago, I just fly out of Dublin now instead.

Cam..yes is the answer. mine’s very good. Letter email, whatever

I have never had a response from my MP but have had responses from a Prime Minister and the MOD. You need to write to the PM to get a response I believe.

I’m no stranger to writing to my M.P., and I usually get a reply by e mail.

I often write emails to my MP & usually get a reply. Sometimes it seems a considered response, sometimes he just disgrees(which is fine as it’s a free country) & often I get a government spound bite response. You can never know what, if any, effect it may have but it’s better to try than not. When events burst the bubble of faulty policy, they may recall your suggestions & entertain them more readily if well thought out.
Always be polite & as respectful as you can manage.

i send a letter a week to my M.P for forwarding to the M.O.D HE NOW CALLS ME ‘ADMIRAL!!!!

It’s interesting that the World’s leading economy protects its very small shipping industry via the Jones Act that ensures that only US shipping lines can be used between, for example, Guam and the US Mainland. I believe in the free market but there also has to be some common sense. The government’s policy of only building warships in the U.K. will fall apart if competing yards don’t exist. The case for Appledore to be part of the portfolio of yards seems to be strong. More importantly, the case to build the new RFA’s in Rosyth, to create a continuity between… Read more »

Nice pic’ of Scillonian III and another ship. 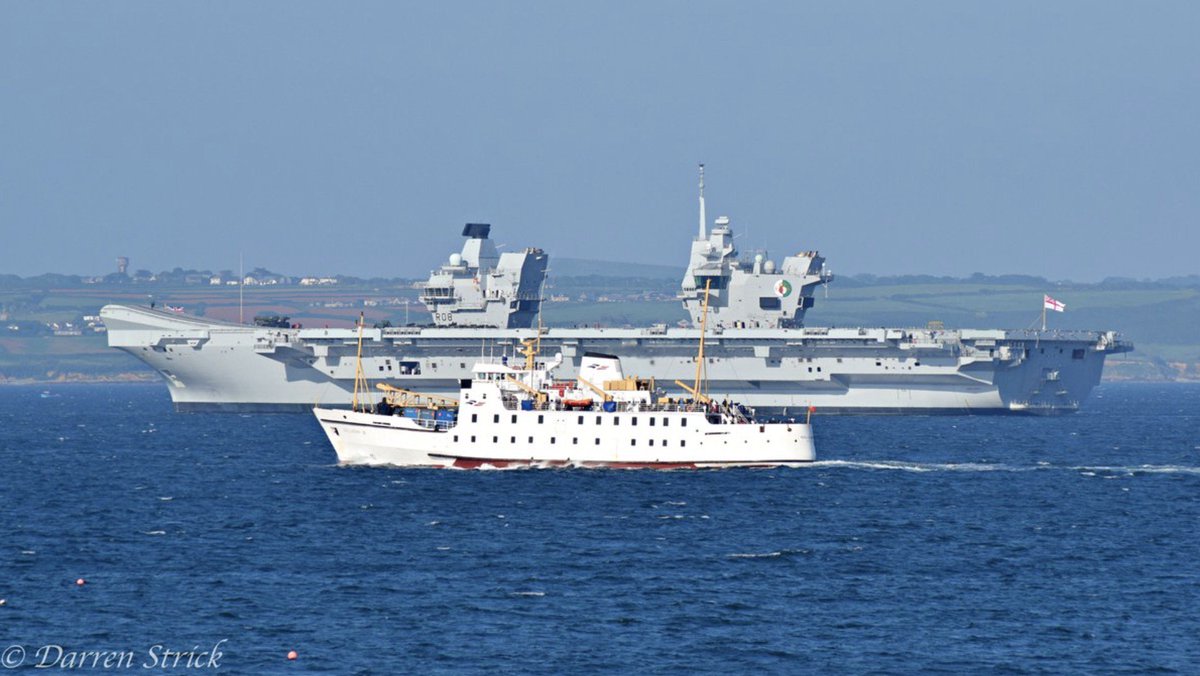 Not very good memories of the old girl for me; several hours of spewing. She has excellent sea keeping qualities, unfortunately, I don’t!

Any idea where that pic was taken?

Everybody gets sea sick some time. 🙁

WHATS THE OTHER SHIP? LOL

The current Scillionian is a horrible ship to sale on if there’s swell, because its flat bottomed. Do not use the lower deck to have a look around!! It was like a scene from the exorcist – nuff said.

I have always thought that the Govt should have provided support to keep Appledore open. It could at least have built some sections of the type 31 frigate and if the Govt built the RFA solid support ships in the UK then Appledore could also build some of these sections as it did for the carrier program. That’s why I created the petition to ensure that these ships are in fact built in the UK: https://petition.parliament.uk/petitions/235377 Also write to your MP, we need to keep a strong shipbuilding industry in this country supported by the Govt, just as other countries… Read more »

We should say Isles of Scilly ferry rather than Scilly Isles ferry. This is the preferred description for local people.

Didn’t the government already offer Babcock 61m worth of work? Babcock turned it down not sure what offering another contract will do and a ferry is likely to be around the same value if the owners of the yard don’t want it there’s little the government can do. Sounds like potential new owners want to diversify into other steel fabrication but union wants to negotiate on this.

Would a SWATH ship provide a smoother ride for passengers?

Yes. Initial purchase cost would be a problem. Pilot vessel Elbe belong to Elbe Pilot Association cost 50 million Euros in 2011. She is 60m long with a beam of 24.6m. Cornwall County Council has a budget of about £18 million for Scillonian IV.

Would an X-Bow be cheaper?

They should definitely do this. Also, we need more River class O.P.V.s to patrol our E.E.Z., France, Spain and Italy all have more O.P.V.s than us with shorter coastline lengths, the government should order another 2 of these inexpensive vessels and give Appledore the work.

I think it high folly to keep closing down what little military infrastructure we have left. Appledore should be saved. How much more costly in time & lives in addition to finances, to rebuild airbases & shipbuilders etc rather than at least mothball what little remains in excess of current needs. The less defence in depth we have, the less our conventional deterrence & the easier it would be to defeat us or push us to nuclear. Peace never lasts forever.

So what s the long term plan, how are the owners and unions going to ensure they win more order otherwise a few years down the road its the same story. Sir John Parkers report highlights need for change, changes in working practices and digital technologies. My fear is there’s no plan and we’ll see calls for the same cash injection a few years from now with the government again being blamed. Anyone who thinks handing an order to any company means it automatically has a long term future is sadly mistaken, normally its a costly stay of execution.

RFA Tiderace arrives in the UK for the first time