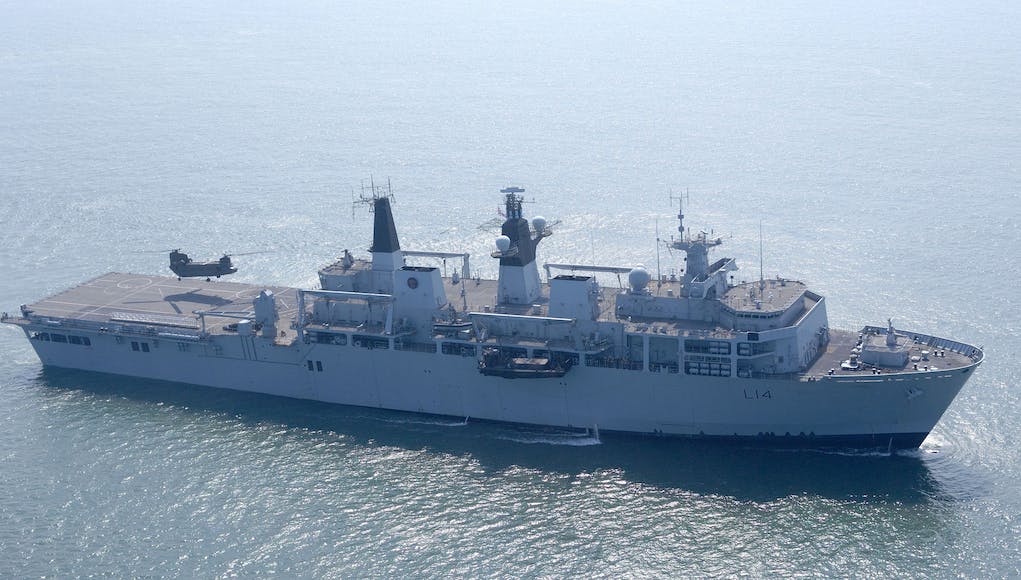 HMS Albion has continued her deployment to the Far East with a visit to Brunei, a key British ally in the region and home to Britain’s main military contingent in the Asia-Pacific.

The arrival in the commercial port of Muara on Saturday afternoon was met with much fanfare by locals including a performance by the Royal Brunei Navy band. Albion’s embarked Royal Marine Commandos however missed the jovial arrival having been offloaded by landing craft prior to its arrival in port to commence a week of intense jungle training.

This training at the British Army Jungle Warfare School will likely see them linking up with forces from Britain’s Brunei garrison. Under longstanding defence arrangements, the British Army maintains a forward deployed Gurkha light infantry battalion along with supporting elements including an Army Air Corps flight to support the defence of Brunei while undertaking specialised jungle training.

This force also serves as a readily acclimatised military asset for the Far East available for rapid deployment to support British interests in the region, as was seen in their involvement in the Australian-led intervention into East Timor.

HMS Albion has already completed a successful port call to the Indonesian capital of Jakarta since arriving in the area, the first visit by a British warship to that nation in nearly seven years and will be hoping to keep that pattern going as it continues its tour of the region.

Speaking in Jakarta prior to their departure for Brunei HMS Albion’s commanding officer, Captain Tim Neild, described the role of his deployment to “work with the UK’s partners to promote peace, security and prosperity in a region that is growing in strategic significance.”

From Brunei HMS Albion will continue heading north towards Japan and the Korean peninsula where it will look to join the work already being undertaken by the frigate HMS Sutherland. Britain’s unprecedented year of naval commitment to the Far East will then be followed up in coming months by HMS Argyll which will arrive later in the year for naval exercises under the auspices of the Five Powers Defence Arrangements.

The Royal Navy has deployed ships around the world this year in a way very few navies can match.
Here’s a report from a little earlier this year.
http://www.savetheroyalnavy.org/portrait-of-an-active-fleet-the-royal-navy-in-the-last-7-days/

Impressive stuff, bearing in mind the funding or relative lack there of) the armed forces get. Good to see the contact in Brunei, important to keep on reminding friends of our support. Still need to address some capability gaps tho and pdq…..

Yep agree Jack- most navies cannot match the RN nor would they want to- especially as we just keep sending our fleet flagship all over the world without any escort or defending task force. That speaks more of the state of our fleet then the fact a single ship, however impressive, can sail to Brunei and back.
Albion should have at least one escorting frigate going with her just as a token gesture- like the French did when they sent a Lafayette class frigate with the LPHD Dixmunde to the far east recently.
happy to debate folks.

Albion will be meeting up with HMS Sutherland and Argyll. Not sailing to “Brunei and back”
We have deployable armed forces in the UK which many countries would like to match but can’t.

Hi Me Bell I agree with that, it would have been nice to pick up a friendly ship from Singapore as an escort, and to perhaps hook up with an Australian warship as well. But yes, the royal navy needs to not sell any more type 23s and should really be cutting steel on 2-3 type 31s. The lack of ships is critical, nothing to replace HMS Ocean? And giving prospective work to foreign ship yards that don’t pay PAYE just does not make any commercial investment sense in the long run for local talent – https://ukdefencejournal.org.uk/build-1-billion-order-for-support-ships-in-uk-demands-shipbuilders-union/ PS if you… Read more »

Not doing too bad for a mid-sized Western European country. More east of Suez than the rest of Europe put together and still maintaining all NATO standing commitments too. We will have an aircraft carrier on fast jet trials next – just a shame BAES can’t tell the different between glue and bolts……£114M and kept together with glue ?

It’s not just glue and bolts that BAE is having problems with, its understanding what a warship is. No weapons that can say boo to a Russian warship or submarine, furthermore, OPVs can go as fast of 27knotts like a Russian warship can. It’s only a matter of time before a thoughtless person asks an OPV to shadow a Russian warship in the English Channel, and that Russian warship starts turning screws to have a laugh and leave that phoney OPV ship without credible weapons behind in her wake. A laugh at the RNs expense, all because BAE are more… Read more »