For the crew of HMS Enterprise, flagship of NATO’s MCM Group 2, 2018 opened in the city of Izmir, Turkey.

According to the Royal Navy, Group 2 dispersed at the end of last year, with the participating ships returning to their native countries with the exception of the flagship.

With the advent of the new year, new ships are assigned to the NATO force. First up: TCG Akçay, a German-designed, Turkish-built minehunter.

In Izmir the respective ship’s companies showed off their various pieces of equipment to demonstrate what their vessels can do.

According to a a press release:

“The Brits demonstrated how they would deal with a flood aboard the 4,000-tonne survey vessel… and the Turks staged a mock fire which demanded the combined efforts of both crews before being brought under control.

And there was a spot of combined training in the Bay of Izmir, where the Turks practised ‘rafting up’ – bringing Akçay alongside Enterprise to use her as a mother/depot ship. Happy with their combined military efforts, the Brits and Turks sealed their friendship with a football match… won (comprehensively) by the host nation.” 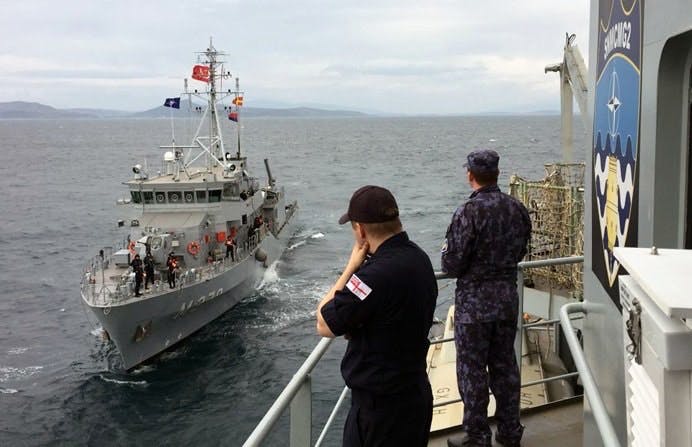 It was also recently revealed that HMS Enterprise has rescued over 8,000 migrants crossing the Mediterranean over the last two years. The MoD said:

“By providing humanitarian aid to Syria and Africa, supporting stabilisation in Libya, and tackling the scourge of Daesh (also known as so-called Islamic State), this Government is determined to stop people having to make such a perilous journey.”

Not a very well informed view I know, but – what a fantastic looking ship!

Shawn – Best tell the Yanks then: