The ship and her crew spent time on the island country in the central Atlantic Ocean.

It was a privilege to spend time with the #CapeVerde Guardia Costeira! Great mutual benefits and excellent foundations laid for future engagement. ?? ?? pic.twitter.com/9aN2ru7gkg

The Batch 2 ships are fundamentally different in appearance and capabilities from the preceding Batch 1. Notable differences include the longer 90.5 metres long hull, a higher top speed of 24 knots, a Merlin-capable flight deck, a greater displacement of around 2,000 tonnes and greatly expanded capacity for accommodating personnel.

The Batch 2 ships therefore arguably represent a distinctly separate class to the preceding Batch 1 in everything but name. 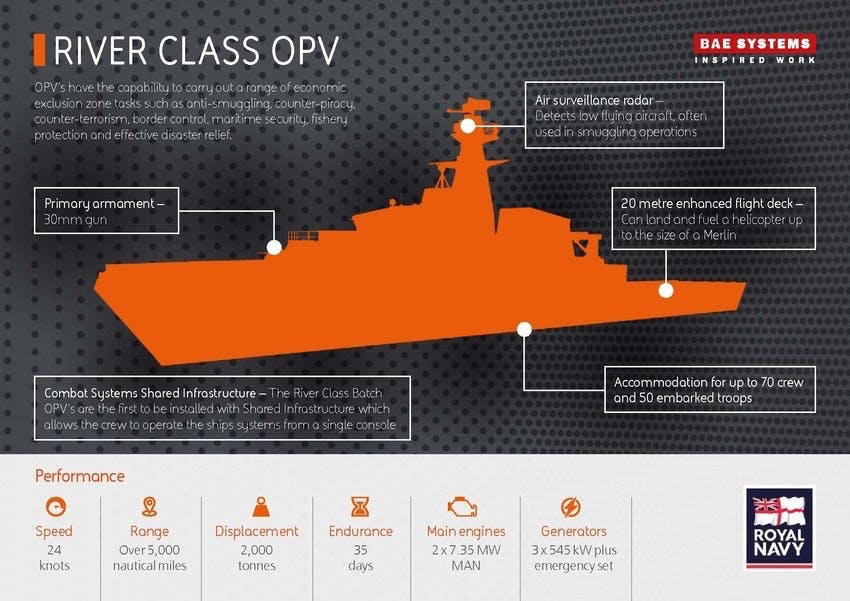 “There were a lot of minor defects and we hold our hands up to that the OPV programme was about the regeneration of shipbuilding capability on the Clyde In due course we can look back at it the positives, although it doesn’t feel like it at the minute if I’m looking at it from either a customer or a sales perspective, it found we had some shortfalls in some of our processes. We have now fixed them.”

The vessel is now fully capable of undertaking this deployment.

We also reported last year that Brazil is to take over HMS Clyde when the Offshore Patrol Vessel leaves Royal Navy service.

Local media have since reported that Rear Admiral Amaury Calheiros Boite confirmed that the Brazilian Navy has been in talks with the Royal Navy and BAE Systems to take over the lease of HMS Clyde when it expires at the end of 2019. HMS Clyde is part of the Royal Navy’s Fishery Protection Squadron. The Offshore Patrol Vessel was designed and built by BAE Systems and is leased and operated by the Royal Navy, while the company provides maintenance and logistical support to the vessel.

Good to see forth is on her way, god speed. I hope they stop some of the illegal Chinese fishing boats that’s are slaughtering the marine life down in the south Atlantic!! They are still british waters and they are absolutely huge including South Georgia and the sandwich islands waters!

Cam: On that Chinese note, have you read articles about how the 6 West African nationals, who were stationed on various Chinese mother ship fishing vessels off the Atlantic coast of Africa to verify legality of the catch have “disappeared” during the last year?

No I haven’t James, but I bet it’s interesting and Ill look it up, thanks. But just look at how the Chinese government treat their own population! Never mind Africans!. Being jailed and “re-educated” for being Muslim for eg!. And Hong Kong is crazy these days thanks to china!. And we british should still hold parts of Hong Kong islands as they weren’t in the 100 year treaty! But we gave them all back like cowards!. Granted the Chinese have built huge major bridges and massive long motorways ect, and I doubt the UK would have on that scale if… Read more »

“We also reported last year that Brazil is to take over HMS Clyde when the Offshore Patrol Vessel leaves Royal Navy service.”

On that note, I wonder what they will sell off next?

HMS Clydes is not being as it’s not owned by the RN it’s leased BAE still similar to the rest of the batch 1s. Brazil have announced that they are interested in taking on the lease.

Presumably BAE offered the RN first refusal to buy the vessel at the end of the lease period so what is actually happening is that the MoD has decided not to buy Clyde and they are definitely not “selling” her for the reasons you mention. If I understand the history correctly a similar decision point came at the end of the batch 1 leases but in that case the MoD did take up the offer to buy those outright. Without knowing what price was offered to buy Clyde it’s hard to know whether this is/was a good decision or not.… Read more »

Draft your post in MS Word, edit and/or correct it as required, then cut and paste online. Simples!

Yeah and I wonder how much BAE made of the Royal Navy for leasing HMS Clyde and the logistics and maintenance of her to the RN. Was it worth it? or more expensive for the UK?, I would love to know the figures. And I believe Brazil will also lease Clyde.

Clyde isn’t going to Brazil.. She will get an overhaul in the UK then be sold to a very long term British ally

whatever will bring the most money in, other than a carrier, one of the retiring t23’s?

How do you view the picture? Cannot see beyond the headline writing!

Good to see her making progress. While she left Portsmouth a while ago (start of November), she was still in Plymouth and Falmouth for a good few weeks after that date.

Hope the crew have a continued safe passage down south.

Is Hms clyde still on station around the Falklands or is she making her way back to the UK??

not ascension, its a barren wasteland with a sand golf course

i suffered the most abysmal festive season down there in 1982 four months after getting back from the falklands war we were sent back for a three month patrol down there! wasn’t good for morale

Respect to you for your service Andy. I followed the War closely from my home in Durban. there was much sympathy for theBrits from here in 1982 but some indifference and downright hostility from some elements. They even made a special version of the Ford Cortina and dubbed it X-ocet which at the time thought was in very poor taste.

Is that the first time we have visited Cape Verde since Drake dropped in a few years ago!!!!!

Went there on Marlborough in 2000.

cape verde, that a long way off the beaten route, somewhere very few else get to

On that same trip I went ashore and did some explosives demolitions work on Tristan de Cuhna. A select few visited Gough Island. On that place to avoid biodiversity contamination you had to scrub down the helo with disinfectant and the passengers boots when you landed.