HMS Middleton has returned to the water after six months ashore as part of a £7.5 million maintenance package.

The Royal Navy say that the vessel went into BAE Systems’ Ship Production Hall at HM Naval Base Portsmouth in July, with her Portsmouth-based crew helping integrate the upgrades and enhancements.

“HMS Middleton is now preparing to return to the Fleet for her 37th year of service with improvements to her generators, hull and living quarters which include every bed space being fitted with electrical sockets and USB ports – a highly popular addition for improving life at sea for the crew.”

“The load-out of HMS Middleton from the ship hall here at HM Naval Base Portsmouth marks a significant milestone within her docking programme. Our team has completed over 65,000 production hours, including a full structural re-baselining of the ship, with over 3km of laminating cloth being laid, extensive system enhancements, plus maintenance and defect rectification. We now look forward to embarking on the commissioning phase and readying the ship to return to sea on schedule.”

HMS Middleton is the seventh of 13 Hunt class Mine Counter Measure Vessels (MCMVs), six of which remain in service. The Royal Navy say that the ships are the largest in the world to be built of glass-reinforced plastic and have seen service in the Falklands and the Gulf.

At least the lads in Pompie know what they are doing with regards to GRP repairs. Some of the work I have seen that came out of Rosyth on a Sandown (that will remain nameless) was simply appalling.

Yes, no doubt there are more yachty types (curly pipes, cable knit sweaters and wellie-boots colours various) on the south coast with their plastic hobby boats. Plenty of glass fibre mat and resin to spare!

By the way, what is her nickname ….wouldn’t be Kate would it?

37 years in service I had no idea. I wonder if the joint france MCMVs will still go ahead or what will replace these just autonomous from our limited ships… I hope we get new ships we’ve lost half our mine ships anyway.

Do the ones in the gulf have any more weapons or counters. Or jst a couple gpmgs and a 20mm

They still have the 20 mm, but I’m sure I read in an article a couple of months ago when it was looking some excrement may hit the fan they now have a couple of mini guns as well. 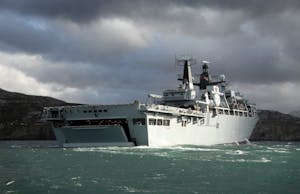