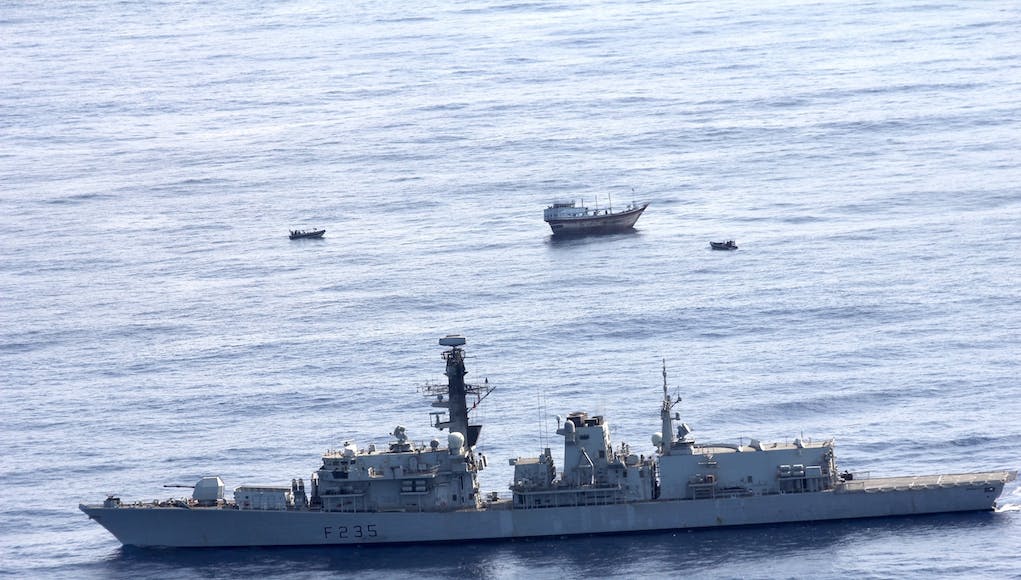 Royal Navy frigate HMS Monmouth has seized £65m of cannabis and heroin from a vessel in the Indian Ocean.

Sailors and Royal Marines from the Type 23 frigate destroyed 455kg of cannabis and 266kg of heroin after finding it hidden in the freezer of a fishing boat.

The dhow – a type of vessel common to the Middle East and Indian Ocean – had been spotted by the ship in an area not normally known for fishing. HMS Monmouth sent two boarding teams in fast rigid inflatable boats to intercept the dhow.

The teams spent 60 hours painstakingly scouring the vessel for narcotics, before eventually finding them hidden in a freezer beneath three tonnes of ice.

“Such a substantial seizure of drugs will deal a significant blow to the international narcotics trade which is known to provide funding for terrorist organisations.

I am extremely proud of the professionalism, diligence and perseverance of my boarding team to achieve a result in such arduous conditions.

This has been an effort by the whole ship’s company and their efforts speak volumes about the Royal Navy’s ability and commitment to preventing illegal activity on the high seas.”

Once the two boarding teams, one made up of Royal Marines from 43 Commando Fleet Protection Group and the other of Royal Navy search specialists, reached the suspect vessel they conducted a detailed search.

ls of a double seizure of heroin by the French frigate Surcouf which brought in 400kg of heroin, worth around £120m on the streets.

(To any French citizens, the above is most definitely intended to be friendly banter between close allies. It’s good to see all of us doing our bit to choke off this vile trade.)

Why are we using a heavily armed frigate to do patrol work like this? And why do think these ships are fantastic when they carry just one helicopter that is really big and expensive, no UAVs, and just two tiny RHIBs?

We need simple motherships for this sort of stuff. T45 hull, 35mm CIWS, optional CAMM, LMM, 12.7 RWS, 2 Lynx, ScanEagle, double stern ramp and 4 Cb90, plus aid supplies. Have 8 and forward base one in Diago Garcia and one in Brit Virgin Islands.