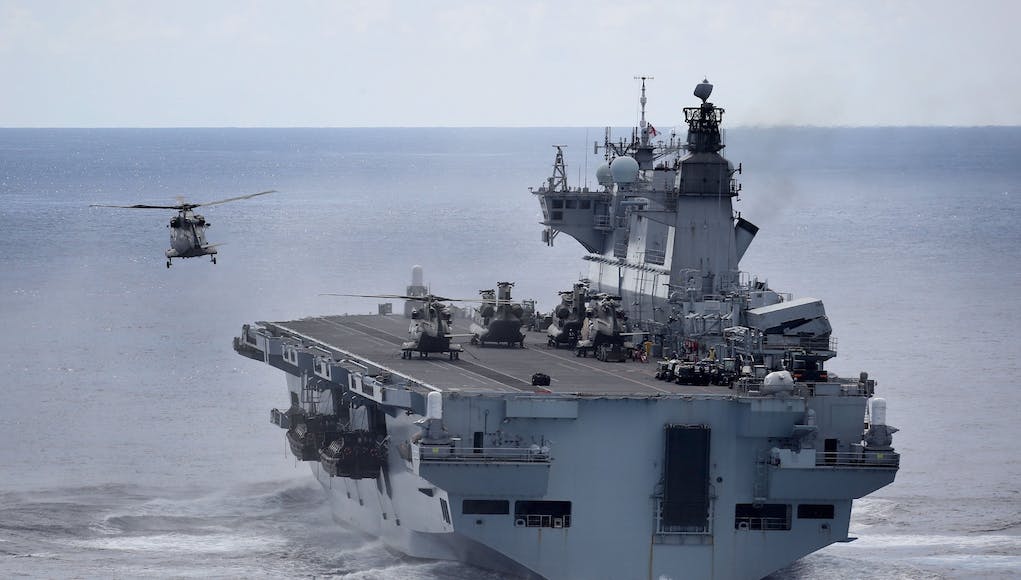 HMS Ocean has now settled into the NATO SNMG2 Flagship role after taking over from HMS Diamond.

HMS Ocean had been expecting to take up the SNMG2 Flagship role in September, but was re-tasked to enable her participation in Operation Ruman; the UK Department for International Development led humanitarian assistance and disaster relief operation in the Caribbean.

Over the coming months SNMG2 will participate in a number of multi-national exercises to develop greater interoperability between the naval forces of NATO members.

HMS Ocean is a large and highly capable amphibious ship, this will enable her to make a significant contribution to the exercise programme. She will host Royal Marines from 40 Commando, US Marines and naval aviation from 820, 845 and 847 Naval Air Squadrons based in the UK.

“My Ship’s Company are proud to have assumed the role of SNMG2 Flagship. HMS OCEAN is an incredibly capable amphibious and command platform and represents a significant UK contribution to NATO’s efforts to maintain security in the Mediterranean region.”

SNMG2 fulfils a contingency role in the Mediterranean region; it can never be predicted what events or emerging threats may arise but the Task Group would be the first on call and ready to respond say NATO.

HMS Ocean is the Royal Navy’s Landing Platform Helicopter and Fleet Flagship. A helicopter carrier and amphibious assault ship, Ocean is designed to deliver troops to the centre of the action by helicopter or by landing craft.

I wonder if there are any Brazilian naval observers on board?

I’d certainly want to see how the ship is holding up in such a scenario, if I was about to spend millions on buying it.

What is to stop Brazil selling it on to Argentina?

Not a damn thing!

Except Argentina couldn’t afford to buy or staff a bath tub for its navy, never mind a ship like Ocean.

I think your thinking of HMS Fearless a decade ago. As best as I can remember the principal problem were the batch 1 type 22’s they bought from us. After operating them they were distinctly unimpressed by their performance and believed they’d been sold 4 pups. It’s not an excuse far from it but relations had been good before and since.

I wouldn’t worry about the Argentinians having her. First time that they try to take it out of dock, they’ll probably crash it into something!

@Albion – everything is to stop them! Why on earth would Argentina buy it? They can’t afford it, haven’t the trained personnel to use it, have no aircraft to put on it, and have no escorts for it even if they did manage to buy it. And please, please, don’t tell me ‘they could use it to try and retake the Falklands’. Sure Argentina regards them as Argentinian. But its pursuing that route diplomatically.

I still can’t believe we are getting rid of her! What an idiotic move!

Getting rid of her is a perfectly good idea, it was designed as a low cost, 20yr lifespan of a ship for the navy, those 20yrs are nearly up.

The idiotic part is not having a replacement lined up.

The second part I agree with you mac!

I think the QEC will more than replace Ocean in these situations and our bays, Albion and Bulwark still give us a good capability.

Ocean has done an incredible job for us – but it is time to move on and move to the carriers.

Yes. But our carriers are strike carriers not meant to be hanging around off coasts supporting landings.

Excuse me, but the scuttlebut says that Albion and Bulwark are to sold off at the next boot sale.
No smoke etc etc

Defence spending that includes the nuclear deterrent and pensions at 2% of GDP not anywhere near enough so cuts have to be made so say the political class.

Yes and there in lies the problem . Defence spending of 2% includes the deterrent eg subs missiles, war heads Research and development at Aldermarston dock and base facilities etc etc.
Development of the new missile subs .
Whilst conventional forces take the hit. Effectively we are probably only spending 1.5% budget on conventional forces. New sub spend should be taken out of the Budget and subject the seperate Treasury budget. Previously it was then Mr Osbourn had it included in normal spend
Smoke and Mirrors operate as usual with Politicians.

I do not doubt Ocean has passed her sell by date but she did just receive a £70 million upgrade paid for by uk taxpayers to retain her in service until 2023. What was the upgrade for? To prepare her for sale? I agree with all previous posts, the idiotic thing is removing her from service without a purpose built replacement. It is opening up another capability gap= that of landing platform helicopter. It is sheer folly and madness to propose sending a £3 billion strike carrier in to do this role. That will be a very expensive mistake. Unless… Read more »

So you worry about putting a carrier in close to shore but don’t worry about the LPDs/LPHs and their crew? If anyone needs to do a landing using LPDs a carrier will be their anyway to provide air support to the landing element. So why not use the far greater facilities of the carrier to lily pad the helos to the troops on the LPDs or Bays? As I have stated many times…you dont need SAMs . They introduce a whole layer of complicated SOPs on top of an already complex task… that of fighting a carrier at sea. CIWS… Read more »

Harold.
do what I do and write to your MP they are supposed to be accountable to the general public and are voted for by us. The more people write to their MPs, the more the message will creep into the corridors of power that current status quo is unacceptable where the military are concerned and that as a nation we will not accept further cutbacks and more capability gaps.

If Ocean, Albion and Bulwark do have to go to free up the manpower for the new carriers in the short term and are eventually replaced by 2 mistral type vessels, would this not actually improve capability in the longer term?

I know what you mean, you get a standard template letter response. Usual issues expanding defence budget, £178 billion equipment budget, new ships wtc etc. You just have to keep writing in, the more letters they get expressing genuine concern the greater the chance they will listen.
going to be an interesting Autumn statement next week….lets see how bad the axe will fall on the countries defences…all to pay our “friends and allies” billions of pounds more to the EU.

It’s as Danielle says, ships like the Ocean are designed to hover off the coast to provide support for Amphibious landings. The QEC can perform the role but it would be restricted if the coast water deph was shallow and if it got hit (which is a real possibility when assulting hostile beach) then it would be catastrophic, unlike losing Ocean which would be a blow but not damaging the entire fleet.

After reading all the comments a replacement must be built ,a bit bigger tonnage wise maybe 30000 tonnes with a more robust mission capacity carry more equipment, troops,stern launched landing craft and a possible launch capability for f35 aircraft ,the idiot politicians must get their finger out of their arses for a replacement for ocean