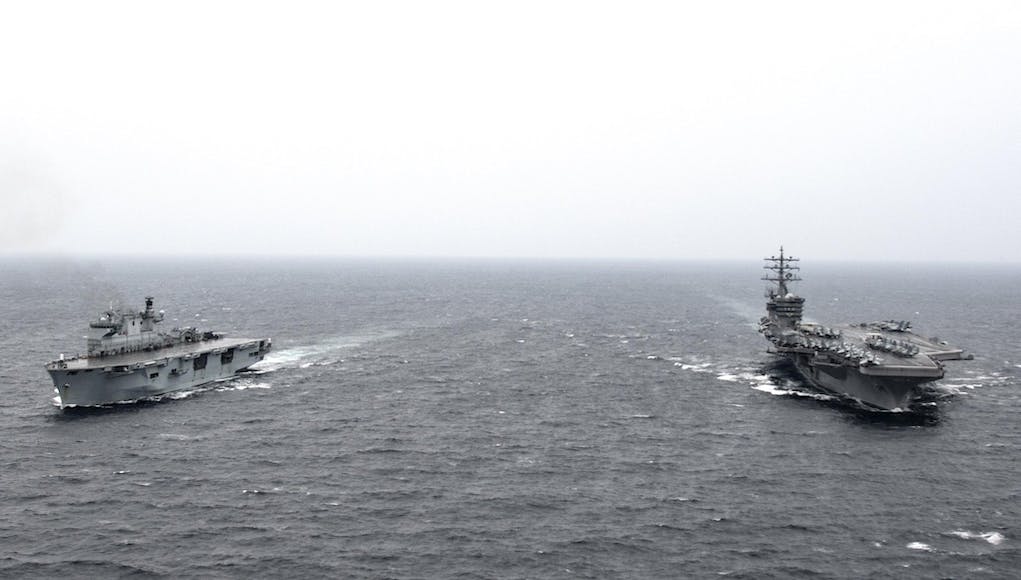 Royal Navy helicopter carrier HMS Ocean has taken command of Task Force 50 in the Gulf, the first time the UK led a US task force in the Middle East.

A change-of-command ceremony took place on board the USS Dwight D Eisenhower, during which Commodore Burns assumed the role of Commander Task Force 50 from US Navy Rear Admiral James Malloy.

“Together we have had an enduring Royal Navy and US Navy presence in this region that has contributed to stability, order on the high seas and freedom of navigation, and ensured the free flow of commerce, so vital to the prosperity of our nations,” said Commodore Burns.

Today marks the start of another chapter in this partnership as the Royal Navy takes on the privilege of leading a US task force in the Middle East for the first time.”

“I cannot think of a more capable officer and friend to continue this mission out here than Commodore Burns. Security and stability cannot be maintained by one nation alone. Working together with our UK and other coalition counterparts, I am confident in the success of our shared interest for security, stability and prosperity in this region.”

Bet Commodore Burns hasnt told the US that his ship will be scrapped in 2018 leaving no carriers in the UK until 2020 And even then we have no plans to build another Amphibious carrier And why Uk wants Prince of Wales a 70,600 ton Super carrier to fill this role. Not sure who is going to carry the landing craft to land all these Marines (Not sure how much longer Bulwark is around for) That would take every ship and Submarine that we had to protect two carriers if we had to do another Falklands could have bought two… Read more »

“Bet Commodore Burns hasnt told the US that his ship will be scrapped in 2018” that has to be the most facile comment I have ever read.

HMS Ocean is not being scrapped early, it was intended to have a 20 year service life.
In the not two distant future we will have two large multi-role carriers which will be a step change in British military capability.
The big mistake the French have made is not building a sister ship for its one carrier.
Albion class and Bay class ships all have amphibious and hospital facilities.

Bulwark and Albion are built to military specification by a competent shipyard Ocean is a bag of bolts, grow up

Not the point – true Ocean isn’t built to military standards but it is being scrapped early and not long after 64m was spent (now wasted) on a refit. Here’s the kicker – there is NO replacement, hence another loss in capability…. just like we are getting rid of RFA Diligence – which was also not long out of refit and guess what???….. there is NO replacement…… the MOD is beginning to sound like a broken record! – worse than ‘fitted for but not with’ for the Type 45s!! That was #1 in the charts last SDSR!

Ocean’s valves and pipe work are a collection of bin ends it’s a mess let her go gracefully and try to stop playing fantasy fleets with sailors we don’t have. We could consider and LHD or two in about 10 years time barring an actual war

No doubt Steve Ocean is in a bit of a state – I agree. She was cheaply made at 150m pounds back in the day. What about Diligence? Now the RN has no at-sea repair ship. She wasn’t due to be retired until 2020. What concerns me is the MOD’s increasing willingness to allow capability gaps across the armed forces which will bite us in the arse and at which point it’s too bloody late!

I keep wondering whether the hopefully upcoming MARS SSS design could at least partially fill the Ocean role. The Tide class tankers are pretty big at 37,000 tonnes and 200m long and at £452m for 4 were pretty cheap. If SSS is built on similar scale, maybe even on the same hull, that would be a lot of internal space that as a supply ship would be mostly huge voids to take supplies. That’s a bit of a blank canvass that surely some clever industrial designers could work with, e.g. basic 6 helicopter hangar but ability if not carrying stores… Read more »

Diligence was part of the STUFT fleet for the Falklands, a couple of offshore oil platform support vessels and some grey paint and you are good to go, all of the specialist kit will be in storage

Answered you against Julian below

Ocean does look a bit old and cobbled together in the picture, when compared to the US carrier.

The UK’s penchant to scrap capability before a replacement is available, is’nt privy to the RN. The joint Harrier Force disbandment was crase in the extreme, and the man responsible is no more. HMS Ocean is an asset, which should not be scrapped but placed in reserve for at least five years by which time, the Elizabeth class carriers can be brought up up speed. With Illustrious gone any other option would be unwise.