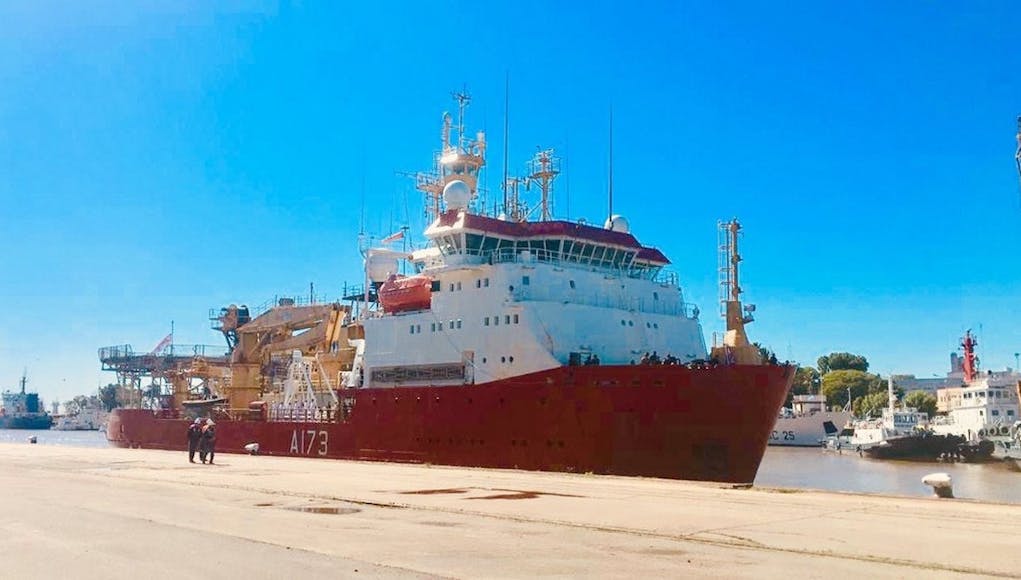 HMS Protector has visited Buenos Aires, the capital city of Argentina, in a sign that relations between the UK and Argentina are warming.

The loss of the submarine San Juan accelerated previously planned strengthening of relationships between the Armed Forces of the UK and Argentina. This is the second visit by HMS Protector this year.

Before this year, the last time a Royal Navy vessel visited the country was 2004.

This morning our entry into port saw our ensign at half mast in recognition of the discovery of #ARASanjuan. Our thoughts remain with the families of those who remain on eternal patrol.

When the San Juan went missing, Britain moved to support Argentina using its forces based in the Falklands. HMS Protector was sent to help the Argentine effort.

One Royal Air Force C-130 Hercules present in the islands was also placed at Argentine disposal, and one RAF Voyager based in Oxfordshire landed in Comodoro Rivadavia, on the 22nd of November; this landing was the first of a British military aircraft to do so in Argentina since 1982. Besides that, specialists from the British Submarine Parachute Assistance Group, regarded as an elite unit, were deployed to advise its Argentine counterparts.

Sadly however, Argentine law maker Gabriel Solano tweeted ‘F*** you!’ and described the crew of HMS Protector, at the time searching for the missing Argentine submarine, as pirates.

Gabriel Solano of the Argentina’s Workers’ Party cited the announcement of support in the search for the ARA San Juan by the British Embassy and made a controversial comment:

“They are occupation troops of the Argentine territory “

Argentinian users however reminded him that the ship is an icebreaker, whose purpose is to help in the discovery of the submarine. Many others appeared to criticise the politician for what was described as a “disgusting” tweet.

Order a variant of RRS Sir David Attenborough for the RN?

While Boatface is a British ship through and through she cost £150 million. Both the above cost I think something like £80 million each. The South African ship has really good aviation facilities. Also with Boatface already in the region the navy might want something more ‘military’ even if the carrying of ‘heavy weapons’ is a ‘no no’. The Australian government are having this built for them in Roumania at £250 million………

Yes. I thought so too. But I wonder if it £150 million and there already being one down there perhaps the RN would prefer something like Norwegian Svalbard? No heavy weapons because of treaty limitations but a more military in design (for example NBC). And about half the price of Boatface.

Australia are having a ‘Antarctic Supply Research Vessel’ built by Damen for them in Roumania at £250 million; it is like the starship Enterprise.

And then there is the SA RSV Nuyina at £80 million too with good aviation facilites.

Sounds like there’s some good kit out there, the Australians vessel sounds particularly interesting.

My only thoughts are that with a vessel like the new RRS for the RN, we would see the introduction of a ‘common’ hull, rather than unique vessels, and if we could build it at Cammell Laird, we could help to alleviate concerns over job losses (and retain a vital skill).

These type of ships tend to be very simple designs, but robust plus. Boatface is twice cost of Svalbard.

The Svalbard design being a ‘military’ vessel ‘considers’ a couple of things that are missing from civilian designs. We all remember that fraught Endurance dodge around avoiding the Argentines…….

The Canadians are building the Svalbard design in numbers too.

The Sir David Attenborough is exceptionally well equipped for her scientific role.
https://www.bas.ac.uk/polar-operations/sites-and-facilities/facility/rrs-sir-david-attenborough/science-facilities/

Why do we bother when their attitude is like that.

That is the attitude of a communist man who haves not any power here. Our government is making happen the best relationship moment between our countries since 1982. And we are really glad with the end of that long term stupid politic of the last 30 years.

What no pitchforks, torches, and screaming mobs? After all it’s COMMON knowledge that the San Juan hit a British mine. I’m surprised that the Argentine government hasn’t tried to impound the vessel…

Dripping sarcasm off… My sympathies still lie with the crew and family of the San Juan.

It’s very sad. Hopefully them finding the submarine will bring some sort of comfort to the families as we approach Christmas. 🙁

I read some comments from many Argentinian people on the HMS Protector twitter page and they where overwhelming in their appreciation of British efforts to help find the submarine when the tragedy happened and very welcoming of the crew.

British mine 800+ miles away from her last known position and very much further South and West then she was supposed to be. Something odd going on there.

Anyone know what’s happened with the routine deployment of a frigate or destroyer alongside hm S Clyde at the Falklands? Any announcements regarding this? Cheers

It happens when a ship is available, but given the general lack of escorts available, deploying a proper warship to deter a non-existent threat when the island already has adequate other defences isn’t seen as a priority

Official story is it isn’t needed anymore due to lowered tensions. Unofficial is we are down to bare bones escort wise, plus ships uncrewed and just can’t afford to have one stationed perm in a area where the risks are currently low.

Unfortunately, one or two comments above need to be deleted. I welcome the improvement in relations between Britain and Argentina. Long may this continue.

Which one or two? I suggest you have another read.

Anything that claims she hit a UK 1982 laid mine mate, as we deployed no sea mines in 1982. We all want healthy & respectful UK-Argentine relations.

We hope so too.

We hope so too. 😉 And by the way that man who calls pirates that mission is nothing but a communist. Long may the improvement of our relationship continue.

I for one hope that this is the beginning of a rapprochement between us. There are bigger, badder issues out there than the Falklands and while I would never want to belittle the sacrifice of our service personnel, or in generally to call into question the validity of our response to their actions in 1982, I do feel that the time has come for a reassessment of our position. It’s right to adhere to the principle that the islanders should have the final say on their nationality but we can and should act to take the emotion out of the… Read more »

Do you know which South American country has the biggest UK embassy? For about 95% of Argentinians the Falklands isn’t an issue. Why should we hand over territory that has never been their’s just because they stamp their feet a little? They will still butchering indigenous peoples 30 years after our colony had been founded on islands that have never had any human settlement. Geographic proximity is no argument for ownership. Especially when those claiming ownership are colonialists too. South America should be a continent to rival Europe and North America. You have ask to, why is it pretty much… Read more »

When I said ‘never had human settlement’ I meant there wasn’t an indigenous population.

You don’t live there. Only a local will appreciate what it means to have an eternally belligerent neighbour. I do t pretend to know what it was like during the war. But I am from Gibraltar. As a proudly British national, there is no hardship I would be unwilling to go through to maintain British sovereignty, jurisdiction and control of my homeland. In both Gibraltar and the Falklands the neighbour is a bully. You cannot share with a bully. The bully takes what he can and the more you give the more he takes. Therefore there cannot be sharing of… Read more »

Money should never be an object when safeguarding the freedoms of the citizens of a nation. The Falkland Islanders have voiced their opinions several times. They wish to remain British Citizens and a British Overseas Territory – something which the Islanders have clearly demonstrated in recent years. Until their opinion changes I.E: a desire for shared sovereignty or independence, it is only right that we continue to maintain their wishes. The UK government should not try and negotiate or act on their behalf without their consent. A similar issue arose with Gib’ in the early 2000s. The Labour government thought… Read more »

OOA-if we reduce our relationship with our fellow Britons to one that must be justified solely on a cost-benefit analysis then maybe we should be ceding some of the outlying Scottish islands to surrounding Scandinavian countries, Northern Ireland to the Republic, and perhaps Hastings and the surrounding countryside to the descendants of Normans across the water in France? Strategic, political,historical,economic,ethical and kinship reasons apart, your suggestion to hand the Falklanders to Gabriel”F*** You” Soland, makes perfect sense!!!

Personally, as a Scandinavian I’d like to reclaim Cumbria and a bit of Yorkshire.

Sure the costs of denying me my right isn’t worth the costs, no matter how the few million people living there feel about it.

I agree with you that it’s not all about money and tried to make the primacy of the vote clear in my point. Said another way, what I was trying to argue was that I hope this port visit Marks a gradual return to a sensible debate. It’s clear that this is a long way off given comments like Steven’s but if we could normalise our relationship with Argentina on this issue, there may in time be some interest from the islanders – perhaps in future generations – on more co-operation, perhaps even shared governance. I say again, I’m not… Read more »

There is no debate to settle. Final.

The sensible debate is that the Falklands have never been Argentinian… The only reason they ever bring it up is when their politicians need to deflect attention away from some domestic issue.

I welcome the warming relations. It is beneficial for both of our countries to be friends and Argentina is a beautiful place.

Thanks for your comments. I would love it if relations between the two countries could be normalised but it would seem to me that this would only happen if, either the Argentinians dropped their claim to the Islands and ceased the brainwashing of their people in this regard, or the British suddenly decide one day to walk away. I think neither of these options are realistic or likely.
Regards

The relationship between Argentina and the UK isn’t quite as the picture painted in the MSM.

Cam Hunter , the new Sir David Attenborough does have a hanger. You should have checked that before you sounded so ill informed.
https://www.bas.ac.uk/polar-operations/sites-and-facilities/facility/rrs-sir-david-attenborough/operational-facilities/

You should look up the word ‘tact’ before sounding like an utter arse.