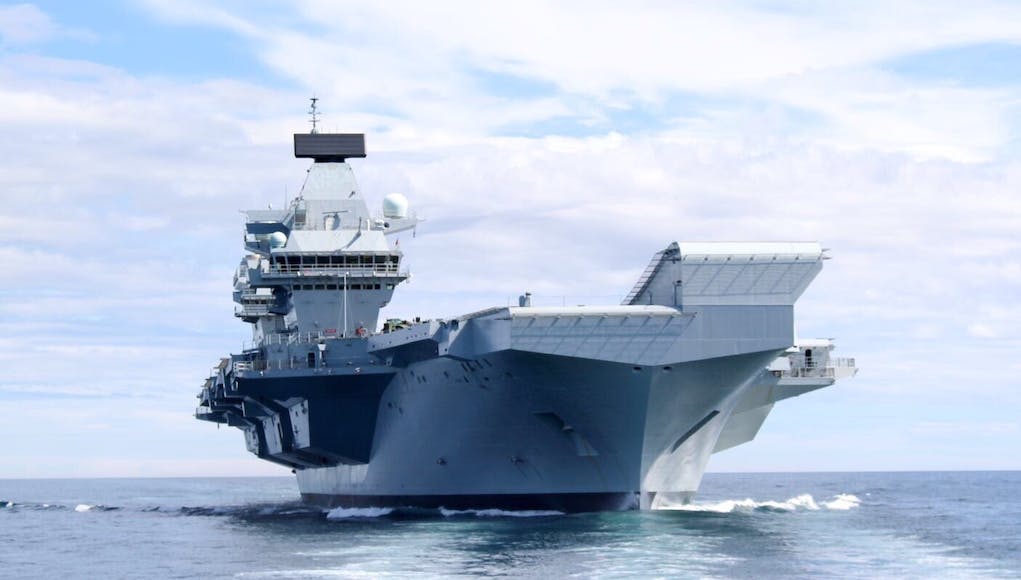 Aircraft carrier HMS Queen Elizabeth was due to sail this afternoon, that has now been postponed.

Conditions for ⁦@HMSQNLZ⁩ to depart today not ideal despite the sunshine, so a late decision to postpone. Sorry if you’ve already made your way down to see her – next opportunity Monday around 3.30pm. pic.twitter.com/FgmIzDUDsr

The vessel will soon sail to participate in the UK’s Carrier Strike Group exercise (GROUPEX) and Joint Warrior 20-2 (JW202).

Commodore Michael Utley, Commander United Kingdom Carrier Strike Group, is reported by Save The Royal Navy here as saying that HMS Queen Elizabeth will be escorted on her ’round the world deployment’ by two Type 45 destroyers, two Type 23 frigates, a nuclear submarine, a Tide-class tanker and RFA Fort Victoria.

Conditions?! What conditions? I hope they are not referring to the weather / wind. Clear blue skies and a 20 mph easterly..! Covid?

I’ve often wondered why the two ships aren’t moored alongside pointing towards the harbour entrance?

My guess is tides?

The Naval Airmen Meteorologist will have a much better picture of the local weather conditions.

That was me I till mid 1985.
In Pompey now, told at dockyard gate that positive Covid19 had been diagnosed.

We were there yesterday and was told at the main gate by the security staff that Covid had been found on board and the ship would not be leaving.
I posted this yesterday afternoon but suprise, surprise it was deleted. Truth can offer be the best for all. Having served for 21years I know the hierarchy often prefer spin.

The captain’s underpants is the reason. The Royal Navy regulation Type 2/8976531/AZX were delivered this morning, but due to COVID19 the specification Type2/8976531+4/AZX must be worn with additional elastication around the gusset. Apparently, all will be well.

I’ve heard it was indeed because of East wind. If they do run aground its preferable to run aground off Still and West. Couple of pints for the bridge and its up and away. HMS Vanguard showed what can be done.

I know little on this subject.

Are we saying that todays weather can cause our most important warship to remain in harbour?? I’m not far from Pompey here and while there’s a slight breeze it is hardly a storm. Is the wind going to drift her into Gosport? Or out of a dredged lane? The Cruise Ships I’ve Travelled on don’t have an issue. Isn’t that what tugs are for?

Explanation from you navy types please.

I suspect we are not getting the full story.

A ship that big carries a lot of windage and the forecast here this morning was for up to force six, gusting seven, and it would have been pretty much beam on. The two hazards are firstly, the ship has to be turned by tugs so that it is bows south to the entrance, and I suspect that QHM took the understandable view that it wouldn’t look very good if the tugs lost control and 70,000 tons of grey ship wound up embedded into Gosport! The second problem is going through the entrance at Fort Blockhouse, it’s pretty narrow and… Read more »

Could it be an air pressure and tidal issue affecting the depth of water in the harbour channel, under her keel?

The forecast on Friday was for force 5 to 6, gusting 7, and it would have been blowing right on the beam. I suspect that QHM decided that when the tugs were turning the ship it would not be a good look if she piled up into Gosport!

If the weather is a little iffy why risk it. Its not wartime. The thing is a big slab sided sail so wind is a major factor on entering and leaving harbour. Tugs help but dependent on the wind direction they would struggle. So remove the risk and all is good. It gives the crew another day of drills and exercises anyway.

LPDs and Ocean had the same issues leaving GUZ at times.. So we sat alongside for a bit longer, leave wasn’t granted and you pretended to be at sea. Its no biggy..

The Big Man
Reply to  Gunbuster

I was on the P&O Pride of Portsmouth in 2002 in very rough seas. I told my wife all was well and thy would not sail if it was really bad. We still managed to be blown off the berth and hit HMS St Albans, at the time the newest ship in the fleet. I believe the damage was over a million pounds.
So as Gunbuster says, why risk it if it is not in wartime.

I wonder how many aircraft will be onboard the QE for this exercise?

HMS Prince of Wales’ size and scope is awe-inspiring – she can embark 36 F-35B and four Merlin Helicopters.

6 Merlins are already on-board, and will be joined by more Commando Merlin’s once she sails. 10 USMC
F35’s came over to the UK, plus 617 sqn. So maybe 25 aircraft, maybe more. I’m sure we will see some nice pictures once the exercise is underway.

Royal Navy chase off Spanish ship after it cuts across path...