Aircraft carrier HMS Queen Elizabeth has now returned to Portsmouth after completing a number of firsts for the ship, notably F-35 trials.

The Royal Navy say in a release that during the Development Trials, F-35 jets conducted 202 takeoffs from the ship’s ski ramp, 187 vertical landings, and 15 shipborne vertical landings —a landing technique unique to the UK. They also dropped 54 inert bombs, testing the weight loading in a variety of weather conditions and sea states. The operating envelopes will be further expanded during Operational Trials, scheduled for next year.

“HMS Queen Elizabeth’s inaugural deployment to the US has not only marked the return of the Royal Navy’s carrier strike capabilities, but also strengthened our special relationship with US forces. A true statement of our global reach and power, this ship will serve the United Kingdom for generations to come, keeping the nation safe and supporting our allies as we navigate increasing threats.”

“The WESTLANT 18 deployment has been a real success; and let’s not forget that we are just a year on from the Ship being commissioned and accepted into service.

The main effort – Fixed Wing Flying trials have delivered outstanding results, which is testament to the co-operation, hard work and dedication of both the Ship’s Company and the US Integrated Test Force, assisted by the US Navy and US Marine Corps.

Their combined efforts have put us in an excellent starting position for next year’s Operational Testing. The Ship has proudly flown the flag for the UK across the Atlantic.”

“Since the ship sailed from build only 17 months ago we have operated Fixed Wing – most notably the F-35B – Rotary Wing and the Tilt Rotor MV-22 Osprey – 9 different aircraft types in all. We have proved the incredible design of the Queen Elizabeth Class of ship and the partnership with the F-35B.

In that combination, we have something very special that will provide significant operational capability for decades to come, strategic choice for our government and a Task Group focus for the Royal Navy; we are truly back in the Super Carrier era.” The deployment was also the first for the reformed UK Carrier Strike Group staff according to a Royal Navy news release, headed up by Cdre Michael Utley, who said:

“This has been an extraordinarily successful deployment on the Royal Navy’s journey to full Carrier Strike capability. It has once again demonstrated the strongest of relationships with our closest allies in the US and will underpin future work as we re-introduce fixed wing aviation at sea.

The design of HMS Queen Elizabeth, specifically built for the immensely capable F-35B Lightning II, has enabled outstanding progress which will form the basis of Operational Testing in 2019.

The other Task Group units deployed, including HMS Monmouth, our new Royal Fleet Auxiliary Tanker RFA Tidespring and the Merlin Helicopters from 820 and 845 Naval Air Squadrons, as well as Royal Marines and members from our sister Services, have all contributed to this significant success.” 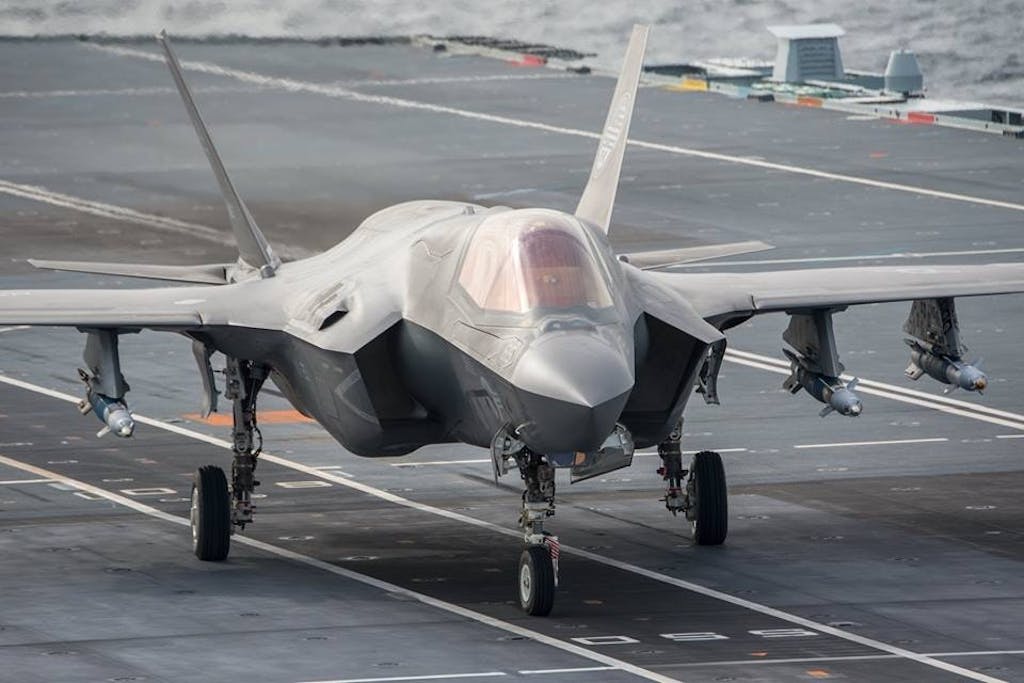 The Task Group comprised HMS Queen Elizabeth, HMS Monmouth, RFA Tidespring and aircraft from 820, 845 and 814 Naval Air Squadrons, as well as Royal Marines from 42 Commando and supporting units from the US Navy and US Marine Corps, say the Royal Navy.

Merlin, Lynx, Apache, Chinook, CH53, F35, Osprey, Sea Hawk not sure what the last will was maybe a UAV of some sort.

I guess that the Wildcat is the Lynx in effect as the Lynx itself is no more in UK service. I also read somewhere else that they were counting different marks of the types, so out of those listed perhaps Merlin Mk2 and Mk3 for ASW and Commando respectively, equals two types?

going back to the old chestnut of missile systems for the Q.E,why not carry a couple of land ceptor systems,park them anywhere keep them in the hangar https://www.youtube.com/watch?v=kQJaDxmrrhw

A US MH-53E Sea Dragon did land on HMS QE

Number 9 ( or Number 1) Is, the Drone that landed on her In Rosyth. Technically I’m correct !

will she big enough to use the taranis drones?

Taranis is not that large, but is it that far along in development? I thought it was a demonstrator.

Blimey, by then We’ll probably have “Abbot and Costello” In Government, shortly followed by some bloke called Vladimir, If recent events are anything to go by. “We’ll keep the Red flag Flying Here” and all that.

going back to missile systems for the carriers, how about a couple of land ceptors parked on the upper deck? flexible, faster to set up than rapier https://www.youtube.com/watch?v=kQJaDxmrrhw they can even be stored inside to keep the weather off them! good idea yes or no? i’ve seen pictures of several of our 18 f 35’s with roundels painted on them the ones i’ve seen are far too small, and should be twice as large!

i’m more bothered when they get their phalanx

I have a new tasking for HMS QE, early in New Year! A anti-submarine exercise in North East Atlantic with type-45 escort, and with a full squadron of Merlin Mk2 embarked, and some Mk4’s, maybe some wildcats as well.

maybe a couple of 23’s,tanker, and a 45 to provide coordination training as a reduced ‘battlegroup

Was just in Gosport saw her across the water, closest I’ve been and wow what a sight. More jets and more choppers needed to fill that beast please

Agreed, she could actually hold 70 aircraft max at a push. Not that we will get anywhere close to that!, but American carriers have to keep jets on the top deck if they carry that number and that isn’t good for aircraft with all the salt and weather. I think 45 aircraft would be amazing 34 F35bs and 11 merlin helicopters 6 with crows-nest early warning and 5 anti submarine. But again we won’t get that Either!! We might get 24 F35s and 6 helicopters at a big push…. But what I would love to see is the RM commando… Read more »

70 Is pushing It, unless we have “Our Mate Gav” In the Hot Seat. (maybe I’m just a Dreamer ) If we get 42 F35B’s, 8 Merlin H2’s another 8 H4’s, a further 6 Wildcats and a half dozen Apache’s, then that really would be a Major Kick Arse Deterrent. A Few Osprey Tankers wouldn’t go a miss either.

“Rule Britannia” and all that, what what.

Being realistic I’d be happy with 2 Squadrons totalling 24 F35. A single squadron of Merlin HM2, a flight of Merlin with Crowsnest ( dedicated not nicking ASW cabs ) and a handful of CHF Merlins for CSAR.

Around 40 aircraft. Plus if it is a coalition operation whatever the USMC adds.

I think will probably see more helicopters than jets on her regularly which isn’t a problem as long as there is some heavy armament carried. Are there any heavy anti ship missiles for jets or helicopters? Can think of any which is a problem when her escorts have nothing but harpoon to rely on

As far as I know, the only helicopter born ASM we have is Martlet now and Sea Venom in future. I believe both of those are incredibly light weight and low yield

Needs to be a priority to get some that can be fired from the F35, as well as on frigates and destroyers too. At present any assembled fleet would rely solely on one, maybe 2 Astutes to attack any approaching ships.

In a real war I can see us losing a number of ships, perhaps even QE, and being humiliated.

Never understood why we never bought Exocet…after all, our Navy is the only one to have direct experience of them…sadly, on the receiving end. A big walloper like the new Kongsberg thingy would do…air and ship launched!

Maybe you mean a newer version?

My God….dementia has finally arrived…I’m off to the docs for a check-up. By the way, who is the Prime Minister at the moment…just in case I am asked?

We don’t seem to have one, at least an able one!

No worries. I know you knew.

sooner the better,phalanx fitted as well

Wonder how many little sailors and marines are going to be born 9 months from now?

Just a random question but can we convert some F35bs into flying tankers to refuel other f35s? I’m sure we could do that and it would give our jets a better punch and would keep to the stealth side of things, unless we added drop tanks ect to increase the load. Anyone know?

Would be more effective to buy up some old harriers or find another plane that could take off from a short flight deck than use massively expensive F35 purely for refueling activities. Occasional budy roles is one thing but converting to be dedicated would be a waste.

i’ll never believe that an effort to redesign/upgrade the harrier wasn’t undertaken, if it had, and could have been done to the e72 existing ones we had then, those harriers would have been th equivalent of two squadrons that could have been embarked long before now as the only level 1 partner, in the f 35 programme i’d have thought more urgency would apply to the u.k order aircraft going to israel,australia and norwayshows to me at least that we’re not getting the preference in production rate that we deserve. those 72 harriers ould have already put 2 squadrons on… Read more »

I think F35-B buddy to buddy would be a great capability, even if not for normal refuelling use. Talked about in this article last year:

Cam Hunter- there is no reason why not the USN do so with their F18’s – 4 take off – 2 refuel the leading pair and the leading pair fly onto target deliver their ordance and then head home. Buddy buddy refuelling likely would extend the combat radius of the F35Bs out to around 750-800 miles with a 200+ gallon fuel drop tank and drogue assembly. I would love HMG to get its act together and announce a follow on order for more F35B’s I am a bit worried we will only end up with 48 in active service which… Read more »

I don’t even think it needs to be dedicated aircraft, I think the capability could be basically like pods, so that some or even all F35-B on board could have a dual role, reasonably low fitting time as well. Or at least, I’d hope so.

HMG get its act together? ee gads man, pray tell me of the goodness in which you imbibe?