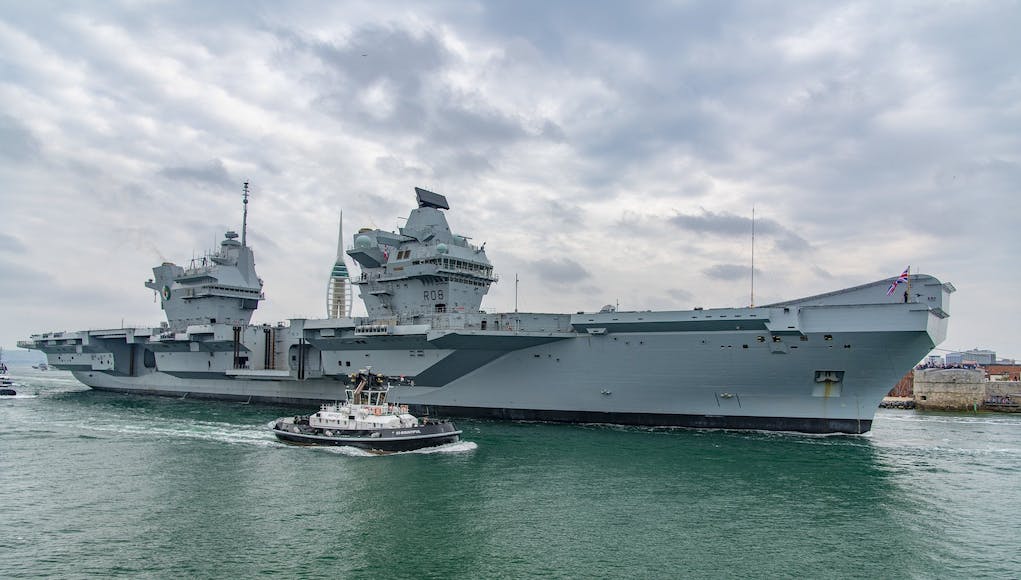 HMS Queen Elizabeth has sailed to conduct further trials ahead of her first visit to the United States later this year.

The second phase of helicopter trials is expected to involve Apache and Wildcat helicopters.

She has been alongside at Portsmouth Naval Base for a 13-week support period, during which time BAE Systems’ teams have been working hard to upgrade her systems and carry out planned maintenance tasks.

They will continue to upgrade her capabilities during this latest sea trial period, as well as testing those that have already been installed, ensuring the ship is ready to travel to the United States later this year for fixed wing trials with her fast jets.

“Thirty people from our Maritime Services business will be onboard the ship to continue the work we’ve been doing for a number of weeks while she’s been alongside. Their hard work will directly help get her ready for flight trials in the United States later this year, so it’s an exciting time for all of us in Portsmouth.

Everyone at Portsmouth Naval Base has pulled together to complete this work– our team, our industry partners, the ship’s company and the Ministry of Defence – and without this Team Portsmouth approach we wouldn’t have been able to achieve everything we have.”

Since she was commissioned by Her Majesty in December last year, BAE Systems teams have been carrying out a number of tasks that include painting the non-slip coating on sections of her deck – something which will be done in stages every time she’s alongside for planned maintenance periods – as well as installing her new funnel badges.

BAE Systems teams have also upgraded the capabilities that will allow her to integrate with the new aircraft and have put in place the infrastructure that will allow the Phalanx close-in weapons system to be installed and set to work. According to a release:

“Our teams have even doubled the size of the Junior Rates’ Scullery, having identified early in the build process that it would need to be bigger to cope with demand. Having the ship alongside for the first part of 2018 has allowed that work to take place, including the installation of a new dishwasher system that uses a conveyor system to do the washing up more efficiently.”

But actually still not fitted. But wahey, we have funnel badges and a fancy dishwasher system… You couldnt make it up…

But infrastructure for them being fitted. Seriously I don’t know why people feel the need to jump on every story with exasperated flinging to the air of their arms like we should have the QE fully operational tomorrow? It’s got a schedule that by all accounts is going pretty well, even when faced with hiccups, which it will have as it’s a first in class ship and something we’ve never done before.

FYI there was also integration of systems to do with the F-35 too, no small task.

You have to keep the Pot Wash Flunky’s happy…

They have limited resources and a tight schedule so they have to prioritise. The ship is on trials in or very near UK waters, so there is an almost non existent threat to it’s safety. I’ll be surprised if she sails without Phalanx fitted when she transits to the US for F35 trails.

Because for now she’s unlikely to sail into danger, but not having enough clean cutlery and crockery could eventually bring the ship to a grinding halt! Or have a whole lot of very grumpy matelots dripping all over the place for being pressed into washing dishes.

it just goes on and on, why don’t they talk up the good bits?

Bloke down the pub
Reply to  Lusty

Ship tracker now shows her alongside in Valletta. I take it that they’re spoofing again?

Might be, she’s now spending her third day in Mounts Bay!

(not that I’m complaining, sure makes a great view!)

Viewing from my phone doesn’t seem to have any issues! Technology eh!

Something else to maintain at this stage. One step at a time eh. We’re not at war and she’s not on ops.

I wonder if these Phalanx’s are new ones or have they refurbished the ones that was removed from HMS Ocean when she was sold.

They will be returned. The RN swap them across all their ships I think there is a YouTube video where they show them stored gatlin guns everywhere.

i’d the nations crown jewels would get new shiney ones

Not forgetting the gpmgs bolted to her rails which she was showing off last sea trials! Maybe the dish washer conveyor is really a secret weapon, an electro rail spoon gun.

Top comment Ian!
Heaven help any miscreant intent on causing an upset. Surface to air Dessert spoon anybody?
Good to see the trials progressing positively. Patience is a virtue.

or a star trek laser in disguise.

GPMG is useless against fast moving targets, great on the battlefield for laying a lot of fire in the direction of the enemy to keep their heads down, but not so good on ships for use against airborne or seaborne targets.

They have no place on a modern warship – it should all be automated and rapid fire.

Apart from that it is all show

like anything, it’s layered defence. GPMG are cheap and so why not install, gives a last ditch hope of a lucky shot.

additionally they proved relatively effective during the Falklands against sub sonic but fast jets, pretty sure would also be effective against even slower ships.

I mean, what do those thousands upon thousands of weapons engineers know right? They should all come over here, we’ll teach ’em a thing or two.

What about if a group of guys are approaching in a small boat with intentions of setting a bomb of?

about as effective as as a stoker on the pointy end with a bag of conkers and a catapult.

Steve I have used the GPMG on many occasions and am aware of its firepower. Regards its use on ships ok if your transiting the Suez canal and some guy pops up on the embankment with an RPG anything else forget it. Use of the GPMG in the Falklands to the best of my knowledge didn’t result in the loss of a single enemy aircraft, may caused a distraction for the pilot but nothing else. I was once at a firepower demo at Westminister, a dozen GPMG gunners tried to take a slow low flying target, after many thousands of… Read more »

I wonder if a dozen miniguns would fare any better? Just a random musing.

Doesn’t QE have 30mm for interdicting fast boat threats? Along with Phalanx if anything got that close in the air for GPMG’s to be in range, I really don’t think the humble Gimpy is anything more than a show when she comes into port. I guess it’s nice to get the crew qualified on a few different weapons systems and they are probably demountable in an emergency. Other than that, meh. I guess we have a fair few lying around, may as well use them.

Steve M mini guns are better bet against fast moving targets, but still a last resort when all else fails. You need a system thats working out the mathematics to achieve a hit and when it does hit one round is enough to disable the target, rather a human being trying to working it out because 9 times out of 10 they will get it wrong even for a highly trained operator As other people have said you need multiple layers of defence on both carriers and the escorts ships. My own personal opinion is that the carriers need some… Read more »

Excuse the pun but I think the ship has sailed as far as their own missile defence goes. It would have been excellent I agree but I’d also have been interested as to how it affected sortie generation and refit/repair times. Let’s just hope the top brass make good decisions as to the numbers of escorts in the carrier groups. I personally would like to see an Aegis ship sail with us on any meaningful deployment. A lot of muscle in those.

Don’t necessarily agree. In fact I don’t understand why the French and Americans have spent the money and taken up deck space with fitting Aster 15 and Sea Sparrow to their carriers. These things never get deployed on their own. Often their own arcs of fire are masked by friendly escorts or supply ships. Firing of these weapons can interfere with deck operations. Their command teams are busy monitoring the entire tactical picture and managing flight ops. The escorts will be tactically deployed to provide the necessary layered defence the carrier and its support vessels require. The carrier’s own weapons… Read more »

Richard, if our carriers ever get involved in a high intensity warfare I would imagine that the more layers of defence the better.

However I have no expertise in this area so accept your comment is better informed than my opinion.

That should be” firepower demo at Warminster ” not Westminster. Sorry.

maybe something like the raytheon rim 116, now fitted to the ford class carriers, they are compact combined anti air, and ciws at just£800,000 for each unit, even our beancounters might stump up.

-looks out of the window-

For those interested, there’s a webcam trained on her:

Lollipop that can barely lick itself