The Aircraft Carrier Alliance, which is currently in charge of HMS Queen Elizabeth earlier said:

“This second phase of sea trials has primarily tested the ship’s Mission Systems, which include the ship’s radar and communications systems. Additionally, we have conducted air flow pattern tests, which demonstrate how air across the flight deck will affect aircraft taking off and landing.”

The HMS Queen Elizabeth is due to be formally commissioned into the navy on December 7th in a ceremony attended by the Queen.

She will then undergo further trials of the F-35B next year off the coast of America.

Her first phase of sea trials, conducted earlier this year, demonstrated the platform stability and manoeuvrability.

“She was stable and strong, which is important for aviation operations from an aircraft carrier flight deck. Very quickly we were able to run her at full power and she performed extremely well.”

What will the vessel carry?

Merlin helicopters were the first aircraft to begin flying from HMS Queen Elizabeth and they will soon be followed by other helicopter types and eventually F-35s in around 11 months.

The UK currently has 13 F-35s with more being delivered. The plan, essentially, is to work up both the ship and her aircraft simultaneously to a point where the jets can begin integrating with the carrier. To that end both will require a series of trials to ensure they can function together safely and this complex programme of trials are already underway.

In addition to the joint force of Royal Air Force and Royal Navy F-35Bs and their pilots, the air wing is expected to be composed of a ‘Maritime Force Protection’ package of nine anti-submarine Merlin HM2 and four or five Merlin for airborne early warning; alternatively a ‘Littoral Manoeuvre’ package could include a mix of RAF Chinooks, Army Apaches, Merlin and Wildcat.

Are Phalanx & DS30s fitted yet? Just curious but if not then when is the fitting scheduled for?

Probably after she is commissioned next month.

If nothing else this ship will be amazing at responding to disaster scene’s. Just think how much help she will be turning up with a bunch of helicopters, medical personnel and the ability to create masses of fresh drinking water.
It’s one of the less talked about but possibly most important roles for ships of this size.

Yes, especially with half a dozen Chinooks embarked to supplement the Merlins.

Agreed but let’s make sure the Foreign Aid budget picks up the bill and not the MoD!

Yes, a part of the foreign aid budget should go twards the QEs, maybe will.

The foreign aid budget can be spent on delivering humanitarian aid and does not have to be handouts to corrupt governments. I would much prefer that the uk foreign aid budget is directed to the delivery of UK made products and services to countries that require humanitarian aid and that this is delivered by 4 dedicated RFA JLSS ships with a full complement of helicopters (which the RN can use as well) and medical facilities. We can provide ration packs, medicines, containerised homes, vehicles (starting with ex MOD Land Rovers which are being disposed of at £25k each on the… Read more »

Agreed. We have the MARS tankers (Tides) being delivered now and the MoD really needs to get the MARS SSS project underway soon. These will be big ships that could potentially be built in the UK thus providing at least some economic/manufacturing stimulus as opposed to our very debt-fuelled and consumption-led economic growth that we see at the moment. As Bay Class on steroids (i.e. bigger with decent sized hangar facilities, hospital facilities, well dock as for Bay but again bigger, and 2 or even 3 Merlin-sized landing spots) these ships should also make excellent humanitarian aid vessels and more… Read more »

A lot of common sense Pacman but …the government says ” We want to spend £13 billion, don’t know why, don’t know where, just spend it”

Seems to be sailing through sea trials. That’s because she was assembled at Rosyth of course.

I suspect the hardest part was getting her out of the docks Dadsarmy….

Just shows what can be done when we put our minds to it – on time and on budget thats what I like (bearing in mind the client changed the cost and timeframe – not the yard).

I fully agree that when HMS QE or any other UK military asset is being used for humanitarian tasks it should be paid for out of Foreign Aid funds. It sounds as if the QE has impressed on her sea trials, so it bodes well for her career in the fleet. It would be nice to see some aircraft on her deck at commissioning. A few Merlins, Wildcats, Apaches and Chinooks. I suppose a couple of F-35Bs are out of the question but some helicopters would be good to represent the three services.

1SL confirms Type 45 and T26 will be used for CBG and Deterrent.

OPV and T31 for other roles.

Now sea trials are completed straight back to dock please for phalanx , ds30s and of course sea ceptor
FFS it cannot be right that the QE is the only strike carrier in the world with no SAM.

Absolutely. One day we could pay dearly for cutting corners on weaponry etc.

1SL on RM and amphibious shipping “As for specialist shipping, in the longer term we may opt for multi-role platforms which can provide amphibious capabilities, but can also serve as an afloat forward base for a range of enduring maritime security tasks.” And. “That model is, we hope, consigned to the history books; but in instances where aviation lift is unavailable or insufficient it may still be necessary to offload large numbers of personnel and heavy equipment from the sea, ideally at a port but if necessary over a beach, however that might be achieved” No direct mention of the… Read more »

I’m having trouble stitching those 2 excerpts together…

““As for specialist shipping, in the longer term we may opt for multi-role platforms…”

““That model is, we hope, consigned to the history books…”

Presumably “That model” doesn’t refer to multi-role platforms in place of specialist shipping because if it does then surely he is directly contradicting himself? Assuming that’s not the case then what does “That model” refer to?

I think the “That model …” referred to the previous sentence “Of course, no one envisages sending landing craft full of Marines to storm an enemy beach under a hail of fire.” So basically the work would have been done to secure the beachhead without any landings from the sea, one way or another.

Thanks. That certainly does sound to me as if he’s laying the groundwork for announcing the sale of Bulwark and Albion.

“That model” referred to storming beaches in Landing Craft during an opposed landing.

As I read it he is not ruling out Landing Craft.

Doesn’t exclude the LPDs though, I think he’s talking about a future multi-role evolution, which is what we’ve talked about in terms of LDAs and RFAs.

It’s the only way to go really with limited hulls and budgets, with the 1/2 CBGs the main specialised assets (group of assets).

My worry is they will justify the Landing Craft role through using the Bays, which are not of the same capability as the LPD’s.

Yes, the use of “The HMS XXXXX” also drives me mad. What that is saying is “The Her Majesty’s Ship XXXXX” which is patently incorrect. I have even seen it on MoD websites in the past, which is even worse.

Has a “Thermion” (i.e. Aluminium Oxynitride) Coating been applied to the Flight Deck yet? To protect the Flight Deck from the Excessive Heat produced by the F-35B’s and/or Future Deployment of the MV-22C Ospreys… 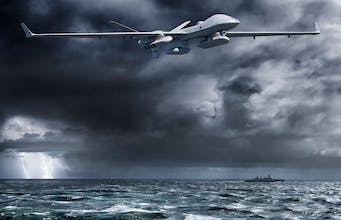 HMS Illustrious set to sail for the scrapyard next week