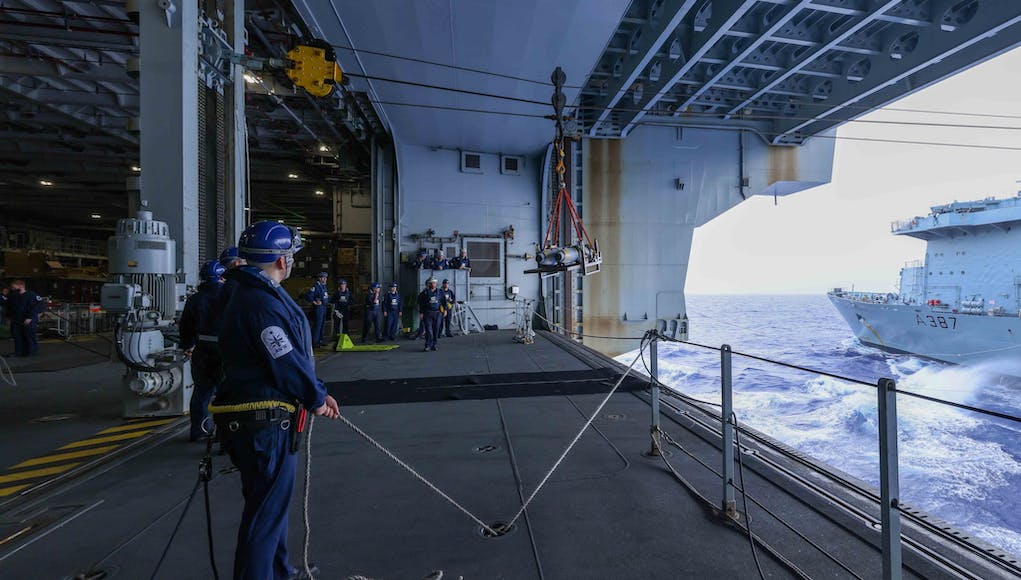 HMS Queen Elizabeth has taken delivery of live munitions whilst at sea for the first time.

Loaded on from @RFAFortVictoria, along with food and aviation fuel, keeping our sailors and jets going at sea! ⚓ 💪 #CSG21 pic.twitter.com/tJ0pheGdrB

The carrier tweeted that the munitions were loaded on from RFA Fort Victoria, along with food and aviation fuel, “keeping our sailors and jets going at sea”.

Fort Victoria is an Auxiliary Oiler Replenishment ship, offering the capability of both stores ship and fleet tanker.

So at the end of a deployment, do all those munitions get offloaded? Phalanx emptied, stored emptied etc? Or is it kept on board for a quick departure? Cheers
[email protected]

I would assume that as the duty Carrier, shes kept “loaded for Bear” when she’s back alongside in Portsmouth Matt.

Aircraft Carriers are only ‘de-ammunitioned’ ahead of major refit periods. To do that they need to sail up to Glen Mallan and de-ammunition directly to the storage facility there.

At present its highly likely that HMS Prince Of Wales has nothing more than small amounts of self defence ammunition onboard as she has yet to go to Glen Mallan for a big load.

Why not say 14 tons? You wouldn’t measure the length of the ship in centimeters, so why measure the weight of the munitions in kilograms?

“You wouldn’t measure the length of the ship in centimeters”

Just be grateful that the ammunition wasn’t measured in ‘average family cars’. ﻿ 😉 ﻿

I’m a little surprised that this is the first RAS of live ammunition.

You beat me to it.

It is the most essential naval measurement……apparently….!

Flight deck size in percentage area of Wales??? possibly quite high if you limit it to the flat areas a plane can land on 😉

Didnt have to fire at anything in the SCS thankfully!

They still got to come back same way… Guam was half way point of the deployment.

This is very interesting. Last time I armed ship was in Gib before we publicly declared we were heading south in 82. This is a bit ominous…

Theyve been expending munitions in the middle east and on several training exercises along the way. Practising was probably a box ticking validation exercise as well.

Makes sense and hope so!

Eh? CSG21 is a training exercise as well.

Nobody said it wasn’t So eh?

#George, Do we need articles padded out everytime with what the CSG is doing? same text same graphics & pics on every artical releating to CSG21? surely everyone knows by now? just t passing thought..

﻿ 😀 ﻿ But if you come to it new it has all the background info. Just skip if not interested but it is all part of the dark arts of making a website be bigger and viable and minimum info becomes max article. If BBC + papers etc can do it why not UK journal. If you look at a lot of articles online they always have rehashed information.

It’s what your mouse is there for !

We do as not everyone knows.

Thought the BBC would of reported more on CSG ,but in reality since sailing round in the South China sea been a little on the quiet side 😶

The news agenda has been taken over in the last week or two. Looking forward to the series on CSG21 when it’s broadcast. Hopefully not too long a wait.

Thanks David will look forward to that.

Any new weapons been loaded for testing/trials or just the same as was loaded before she set off?

I was going to say why the reload as the haven’t used anything. Are we thinking 14 tons of real ammunition has been dropped by aircraft etc, thought the would use cheap concrete practice bombs.

The fighter jets were off on bombing missions of isis strongholds.. no training exercise. They gone out there to do a job.

How could I forget that! So much going on in the world. If the needed them I guess they would off topped up earlier after Syria. Maybe just for the fun of it if could be grabbed some from Guam or something. Maybe sonar buoys and things like that are counted as ammo. 20mm cannon etc

A capability many don’t know exist, the RFA, but a small force which ensures we are and will remain a blue sea navy capable of deploying and operating at length anywhere around the globe. Well done to all involved!

The ammunition and armament load of a ship is set out in an MOD confidential document that was known as the Armament Warrant. It lists all of the Armament stores a vessel must carry as a minimum war stock. Its not just explosives, it also includes all items who’s NATO Stock number is prefixed with an A. This can be arming wires, rifles, spare parts for cannons, grease for guns….the list is comprehensive. As you expend stuff, if it approaches LIFEX, or it gets red flagged as “Do not Use, set aside ” for safety or performance issues, you start… Read more »

Hi George, my message is a bit random, I know, but just thought I’d say thanks to you and all the UKDJ crew who help support and contribute to this website. It’s a daily staple for me for most things UK military related.

Thank you, will pass this on to the others.

Seconded.If it wasn’t for sites like this we would have to earbash family, friends and random strangers with our nonsense. So a thank you from them too. ﻿

Wish I was young enough to go.