The vessel will begin to leave Portsmouth Harbour around 8:30am on Tuesday. 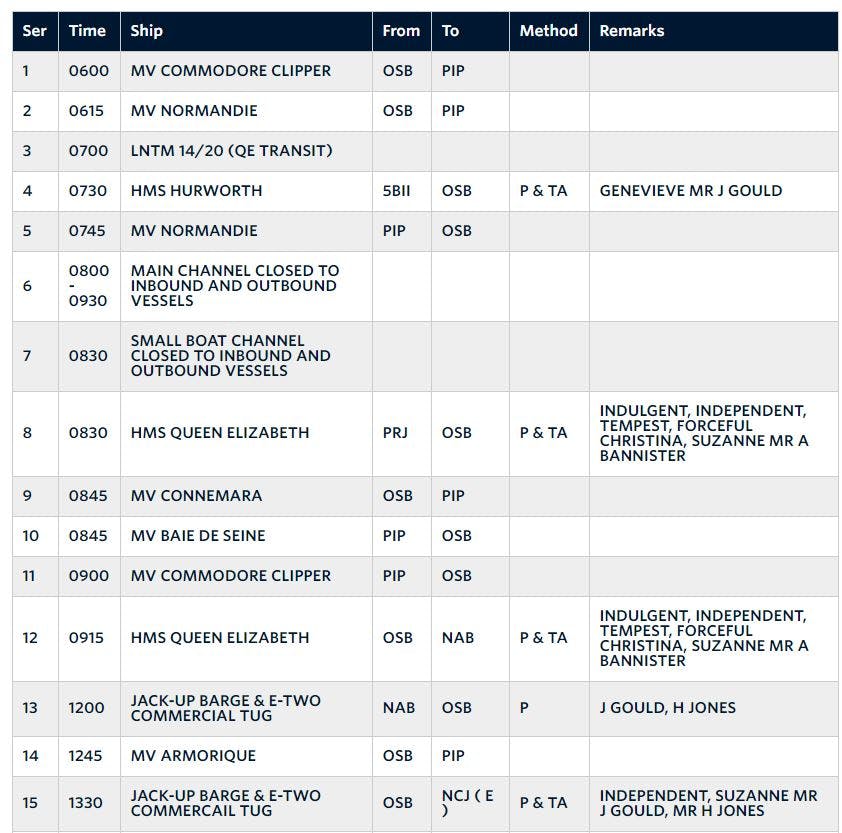 Whilst one storm has passed, there is another brewing.

Get strapped back in as the time is nearing for the #UKF35 and us to work together in UK waters for the first time.@OC207Sqn will be joining to carry out training in rather colder and harsher waters than the Florida coast! pic.twitter.com/Elfi2UfyoR

It hasn’t been revealed where in UK waters the latest round of fixed wing flights will take place, but we’ll do our best to keep you updated!

Commodore Michael Utley, Commander United Kingdom Carrier Strike Group, is reported by Save The Royal Navy here as saying that HMS Queen Elizabeth will be escorted by two Type 45 destroyers, two Type 23 frigates, a nuclear submarine, a Tide-class tanker and RFA Fort Victoria. The ship will also carry 24 F-35B jets, including US Marine Corps aircraft, in addition to a number of helicopters.

Good luck to the officers and crew of the QE and 207 sqn, don’t prang one of the F35s. As for the tasking next year, it looks like a reasonable Carrier Task Group, possibly the Americans can throw in a Cruiser and Destroyer. I just keep thinking that it might be a good idea to have the CTG on a fixed bases, what I mean is once the DDGs, FFGs and RFAs have been allocated then they stay with the Carrier, on operations, go in for refit at the same time, train at the same time etc. That way in… Read more »

I’m not sure why we cannot go back to the Rating System. A 1st rate would be a carrier, a helicopter carrier 2nd Rate, an AA Destroyer 3rd Rate, anti Sub 4th Rate, General Purpose 5th etc…

All our escorts need to be able to do CTG duty as & when needed, so I think making it a fixed team is a non-starter given our tiny, over-stretched, aging(T26) escort fleet. Cancel HS2 & use some to give us a few more FFGs.

I agree, £100billion+ to save 20 mins and only to the Midlands and central England. What could defence do with that extra budget over ten years, as I said in my original post give me an extra £2 billion over five years and I would give the RN an extra ten corvettes, 1000 extra men and two squadrons of three Hamina class attack boats. Or better yet, £10 billion over ten years and you will get the three FSS Ships, three Canberra class, ten corvettes, six attack boats and eight air independent diesel attack submarines such as the Soryu class… Read more »

Damn. Off to Portsmouth on Sunday with the family to the historic dockyard and hoped to see the carriers! Just my luck.

Postponed, not sure when to though.