Aircraft from 207 Squadron, the UK’s F-35 Lightning training squadron, will join the carrier in UK waters within the next week or two.

Whilst one storm has passed, there is another brewing.

Get strapped back in as the time is nearing for the #UKF35 and us to work together in UK waters for the first time.@OC207Sqn will be joining to carry out training in rather colder and harsher waters than the Florida coast! pic.twitter.com/Elfi2UfyoR

It hasn’t been revealed where in UK waters the latest round of fixed wing flights will take place, but we’ll do our best to keep you updated! The purpose of the training, according to OC 207 Squadron is “full Carrier and LSO Qualifications for 207 Squadron instructors – and the first F-35 CQ in UK waters.“ 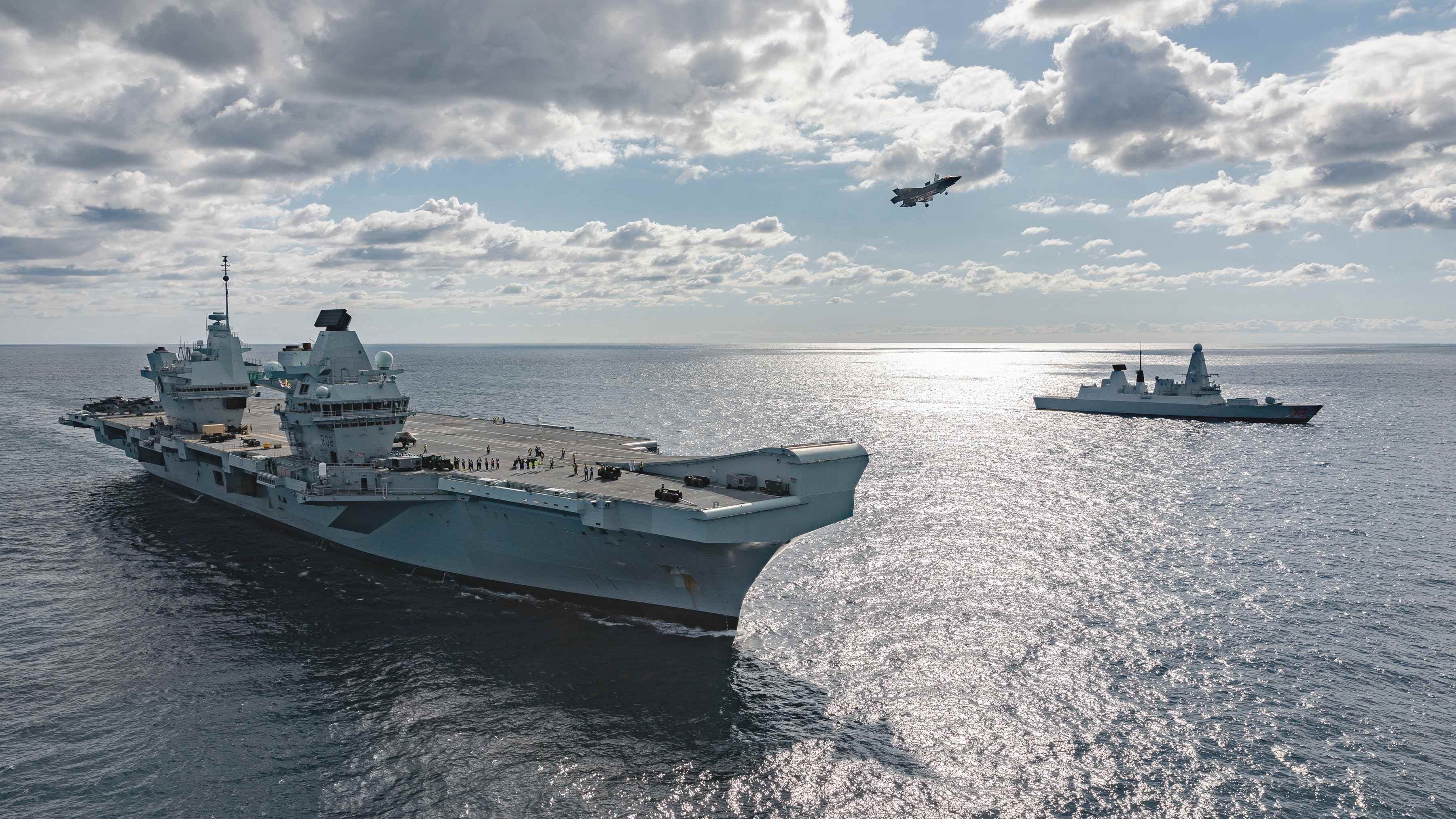 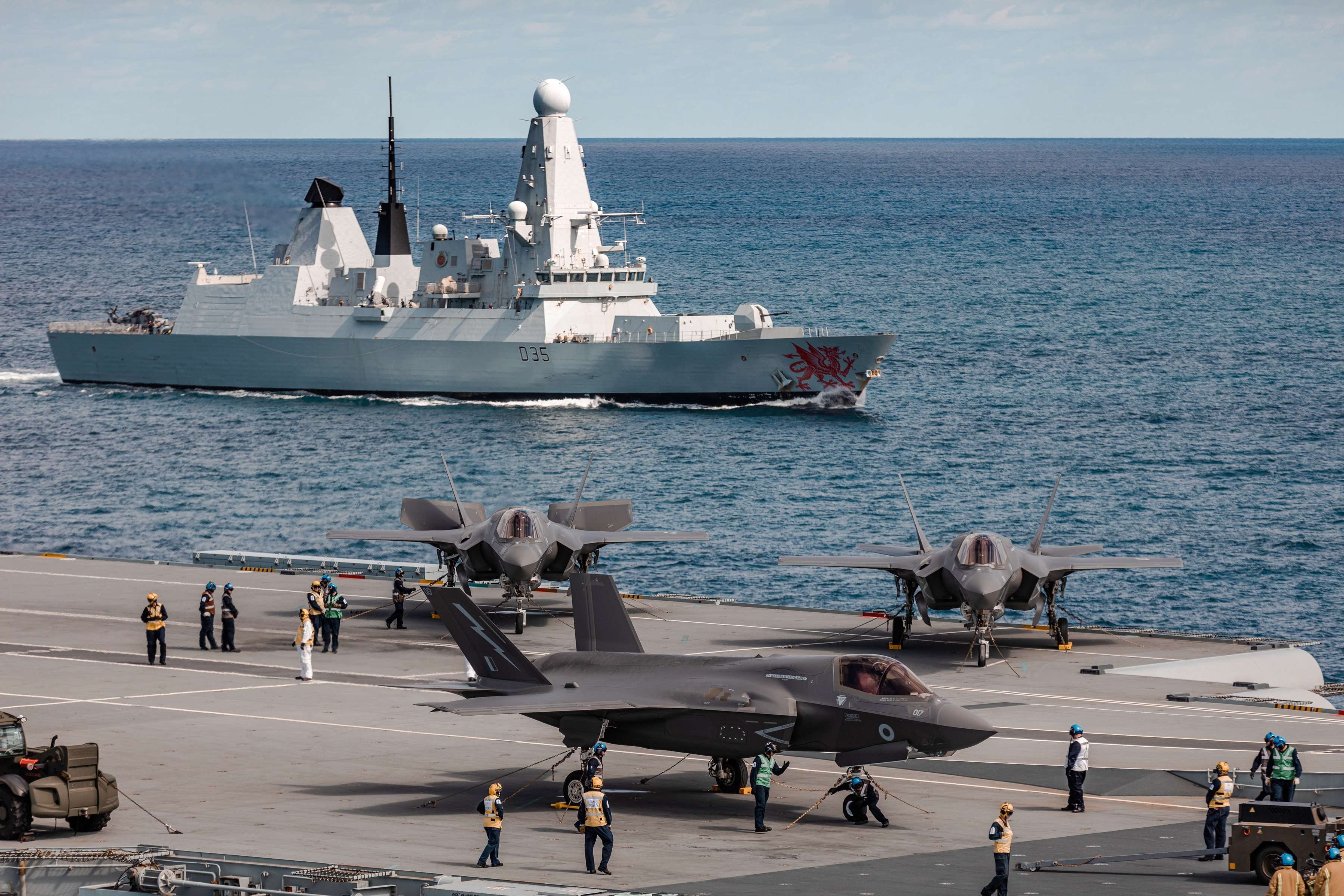 Maybe it might make more sense to concentrate the future naval structure around the two carrier groups and less on Singelton global patroling. The only issue I have with that plan is in our post Brexit existence, we will be under growing pressure to roll into any trade deal some form of defence support? However, monitoring and protecting trade routes from major power abuse, with carrier groups would be exactly the right strategy. Whatever scenario is deployed, more hulls will be required going forward.

Any meaningful trade deal will be with countries who can look after themselves.

Some Middle Eastern countries are meaningful, but tend to link some military factors into their deals. However, significant states can also include an element of mutual defence into agreements.

There’s that phrase again, ‘cut our cloth as required’.

The cynic in me notes that usually means cuts, but I also note that Ben Wallace has used the phrase twice now in the context of our armed forces being too small. So the optimist in me is wondering if we might at least see some small improvement in the situation. Perhaps, Ben Wallace is going to be good for the armed forces?

It’s only a small flicker of optimism, honest.

I initially had a dim view of the future of our armed forces under another apathetic Tory government but Wallace’s language while speaking under CCR has given me a glimmer of hope. Particularly so when he wrote I think in The Times about how the UK can no longer rely on the US as a steadfast ally and must be able to support itself militarily

Yeh, I noticed that quote doing the rounds as well. I think it was even reported on the BBC News..!

We’ve had positive language from defence secrataries before but cuts still came. Let’s see increases in the fleet rather than fine words to deceive the public.

Problem is that it’s not Wallace who is the problem, same as it wasnt Penny Mordant or Gavin Williamson before.

The problem is with the Treasury. Is Sajid Javid likely to allocate more money for defence? Sadly I suspect not.

Hopefully Ben Wallace will remain in post after the next Cabinet reshuffle.

If he lasts more than 6 months he’ll be doing better than too many of his recent predecessor.

Not looking very promising is it?

“Johnson calls off meeting on defence review after policy split”

You will have to give us some detail of the article’s content as it’s subscribers only. Thanks

Reading the article is rather depressing, so much for my earlier optimism, but it seems nothing is yet decided.

Summary for those of us without a subscription to FT?

I read the article myself earlier… Yet again it seems that QEC Class is in the firing line… Strap in for SDSR 2010 Cer 2.0 chaps, I don’t think it will be pretty. Colourful yet empty words again I’m afraid from the DefSec.

Little help: why does the QE Class sit what appears to be much higher in the water than either the Nimitz or Ford Classes? Is it a simple design choice – e.g. to fit another deck in the hull?

From what I’ve read I think the QEC are designed with a quite a bit of future growth built in, so I guess they ride higher in the water reflecting the 5,000 tons or so of spare capacity.

Not carrying much in the way of ordnance and aviation fuel I would guess!

“It is definitely our intention, though, that the carrier strike group will be able to be a wholly UK sovereign deployable group.” I would say this is an interesting departure from previous announcements from various figures in the RN, MOD and HMG that repeated the assumption that NATO/allied ships would routinely deploy as part of the UK CSG. Blithely relying on our allies to cover our own inadequacies is a recipe for disaster: after all, as the 2nd largest defence spender in NATO and one of the few to meet the 2% target (albeit with a healthy dose of creative… Read more »

I thought the original plan was to have a Royal Netherlands Navy Air warfare destroyer as part of the escort for the 2021 carrier deployment ?

looking forward to a picture of her with a deck full of aircraft.

Short answer: Everybody with knowlage of defence matters knows we’re way short of the escort numbers we need for the commitments we have even before the QEs are considered.
Plus there’s nothing yet in the pipeline to alter that!

Just been reading that this has been cancelled, anyone know if that is correct and if so why?

November 9, 2021
Vice Admiral Chris Gardner has confirmed that "it was a propulsion problem".