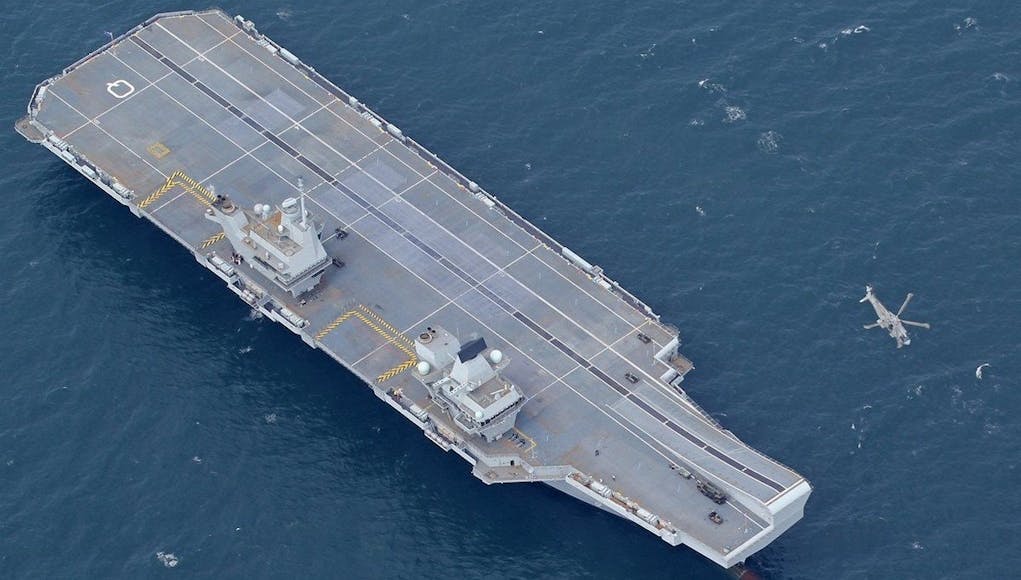 It has been confirmed that HMS Queen Elizabeth is currently having rectification and repair work done after a propeller issue was identified in sea trials.

Multiple sources, some on board the vessel, have told the UK Defence Journal that an issue has been identified with the prop shaft, specifically that the part of the frame/bracket holding the prop shaft in place is 12mm out of alignment, causing the prop to be slightly at an angle leading to ‘cavitation, excess noise and drag’.

It’s possible that this may have been caused by debris as earlier in the month as HMS Queen Elizabeth picked up an item of debris around one of her propeller shafts.

The Aircraft Carrier Alliance confirmed at the time that divers had been investigating the debris around one of the propeller shafts:

“The ship is performing well, however an item of debris was caught around one of the propeller shafts. This was subsequently cleared and an investigation has been undertaken.”

HMS Queen Elizabeth visited Invergordon for a planned stop to re-fuel and store the ship however she has been alongside longer than planned. We understand that the opportunity has been taken to undertake some engineering work, but sources close to the programme assure us that “this is very much in hand and, whilst I’m aware of the speculation, we expect this to be routinely undertaken and for sea trials to continue successfully.”

Earlier in the week a crew member told us that “On the 24th of this month we are going back to dry dock as on the props need to completely stripped apart”, he did add however that this was only a rumour and may not be the case.

We reached out to the ACA for comment who responded by suggesting that this isn’t out of the ordinary:

“HMS Queen Elizabeth is making progress through the sea trials programme, designed to test the full spectrum of her vast and complex systems.

We fully anticipate this will identify areas for improvement that will be addressed at sea, during routine port stops or as part of the planned engineering period.”

It remains to be seen what the true cause of this issue is, however, it doesn’t appear to be a major issue.

Followers on another forum have already seen her (using AIS tracking) doing 26.something knots in the first week of her trials which already meets the “in excess of 26km” target speed. They also reconned that she would switch off her AIS to do the really serious top speed testing to keep that figure classified. If this prop shaft issue is causing extra drag and cavitation which I assume slows her down then, once it’s sorted out, it’s looking like this beauty is going to have one heck of a pair of legs on her.

Julian – I was following her as well and the speed she was entering some of the turns must have made life interesting in the china stores…..

well she is one big prototype..can you imagine the issues that all our new military equipment went through before social media…now it seems any small problem is a big issue and major news..when in fact it,s just ironing out faults

Shame they built this class of carrier without launch catapults or landing arrester gear and that these cannot be retrofitted for less than the cost of a new ship. That means the only potential fast jet that might be able to operate off its flight deck is the controvertial F35. Variously described as a lemon a disaster and an eye wateringly expensive failure. Pres Trump has already tweeted his desire to cancel the entire F35 program. However deploying to the China Sea with Chinese aircraft and missile technology as advanced as it is may not be the best way to… Read more »

Doubtless, and so predictably, this will be picked up by our hysterical, sensationalist media as being the worst thing that has happened in the history of the World–until the next day’s news, which will then become the worst thing…etc, etc. It would be more than surprising if a highly complex, prototype, first of class like HMS QE didn’t experience issues during trials. I fully expect more to emerge prior to handover to the RN, and possibly in her early years of service, as some issues become apparent over time.

Sorry, Andy, you had posted your comment while I was still writing mine, but I think we are of the same mind regarding the media.

Sorry Clive it wont be just the Media, i,,be the host of sneering objectionable little armchair experts who will jump at the chance to say “I told u so”, Gives a chance i suppose to make themselves feel important

As an armchair warrior I never take jurno’s seriously, would be a fool to as they are in the business of disinformation, for the most part they they big up any tiny fault or problems (builders call it snagging) into major issues.

I rarely comment on ‘rumour’ but if this crew member is correct and she will be back in dry dock on ‘the 24th of this month’ that only gives PoW some 5 days to float up and clear said dry dock ….. Unless Belfast has a clear diary.

There should be no error using the latest laser allignment equipment.It isn’t that tail shafts were lined up with piano wire.

Piano wire or lasers as long as it’s within design tolerances does it matter, worked on new builds in the US shipyards and saw both methods being used too good effect

Guys, I am sure that you are all excited, however let me share something with you: The issue with one of the shafts was known at least 6 months ago. Even when she was still in Rosyth there was a talk to put her on dry dock before even goes for see trials. The only reason why ACA and Babcock pushed her out is money….if they have fail to push her out they were risking paying HUGE penalties. Now with HMS QEC out of the dock, they got the money from MOD. Everything from now on will mean even more… Read more »

That’s normal.
Milestone payments are normal written into the contracts for such things as
Ships Staff Move on board
Float Out
Sea Trial

Any issues will now be guaranteed defects for the Yard to fix at their cost now or at a mutually agreed later date.

Yes they are, however you fail to notice that the shaft was out of alignment long time before the ship was even ready. In the first initial test after installation the shaft had a 3 degrees error…….and this was a meter out of the electric motor…by the time the shaft run to the propeller it was more like 12 degrees… All of the ACA and Babcock Management knew about it and never done a thing to rectify this. I am shocked that they even allowed the ship to sail out of the basin in Rosyth. If you look at the… Read more »

The queen Elisabeth is a first of class design problems are normal these are normally rectified over the next few ships and culminate by 3rd or 4th ship as design and engineering work together, unfortunately there’s only one more ship in class so problems wont get resolved correctly

Didn’t answer the question, did you? Won’t even be able to defend itself. Came across most of the fleet of unusable type 45s hiding round the back of pompey dockyard at the weekend. At least that makes some crew available for HMS White elephant.

OK Soft Lad I will answer the question that wasn’t asked. Carriers offer us huge flexibility in Naval and amphibious warfare and humanitarian situations. They are now even more flexible and relevant because a major new weapon system has been developed that makes said carriers the weapon of choice. Amongst others. Its called the F-35 that in ‘B’ format gives us the choice to use them at sea or on land in unprepared areas. It is also the most affordable 5th Gen Stealth aircraft available to us. As to the nonsense about ‘can’t defend itself’ I would refer you to… Read more »

Please enlighten us …where would you spend it?
The NHS ? The NHS is a self perpetuating spending monster. Budgetary wise it is so bad it makes the MOD look efficient and spend thrift!

Oi TH!! The same sort of 12 monstrosities that defended the UK in WW2 and escorted the food convoys so you could sit on your ass and criticise

By the way..in my time on the carrier EAGLE in the 50’s we mixed ordinary green paint with sand and applied it with a soft sweeping brush…… that was the flightdeck anti skid paint! It worked….and was cheap.