At 3:40am, an Icelandic policeman saw a fleet of warships approaching the harbour. The British invasion had started.

Iceland, as you may or may not know, is located in the middle of the Atlantic Ocean. Its geographic location makes it a prime outpost for air and maritime operations. Crucially, Iceland serves as a NATO outpost in the North Atlantic. US and NATO forces, having left Iceland in 2006, are now returning to the island on a rotational basis to enhance the monitoring of air and sea activity around the island.

German General Karl Haushofer once said that “whoever controlled Iceland held a revolver constantly pointed at Great Britain, Canada, and the United States”. Britain in the Second World War seemed to agree with that sentiment, as evidenced by its invasion of Iceland.

The invasion of Iceland by the Royal Navy and Royal Marines occurred on the 10th of May 1940. The invasion was carried out as the British government feared that Iceland would be used by the Germans, who had recently overrun Denmark, as a means to dominate the North Atlantic.

The Government of Iceland issued a protest that its neutrality had been “flagrantly violated” and “its independence infringed”. So, the decision to join NATO as a founding member in 1949 was understandably controversial.

In fact, it’s worth noting that Iceland was the only member state to have a riot in its capital city on the day that its parliament voted to join NATO as a founding member. On the 30th of March 1949, opponents of NATO membership organised a rally and marched to Iceland’s Parliament only to be met by NATO supporters.

The government had been warned about the protest and had called on the citizens of Reykjavík to defend the Parliament. Several hundred citizens had heeded the government’s call and now surrounded the building to protect the parliamentarians from any interference. As the Parliament voted by a large majority to join NATO, chaos erupted outside. Anti-NATO protestors pelted the Parliament building with rocks.

The riot lasted for several hours, continuing even after the vote had concluded. Reykjavík police eventually had to use tear gas to disperse the crowd.

The skirmishes arose following Iceland’s claim to control commercial fishing in territorial waters, in line with developments in international law on the sea and to defend vital national interests. The Royal Navy stepped in to escort British fishing vessels as the Icelandic Coast Guard enforced this new policy and the conflict escalated into a diplomatic crisis for the Alliance.

The Icelandic Coast Guard and the Royal Navy came to blows with Iceland threatening to leave NATO and the United Kingdom again gave in after the United Nations Convention on the Law of the Sea established that a country’s exclusive economic zone would extend 200 nautical miles offshore.

Indeed, throughout the Cold War period, Iceland had several national debates about whether or not to withdraw from NATO.

Despite the surfacing of disagreement, Iceland continuously contributed to the Alliance. During the Cold War, Iceland allowed NATO to station forces on the island at Keflavik airport and volunteered the Icelandic Coast Guard to assist the organisation, activities that were pursued after the fall of the Berlin Wall and to this very day.

As important as Keflavík Air Base was to NATO forces, even more important were the waters surrounding Iceland. The GIUK Gap is the name for the maritime channels between Greenland, Iceland and the United Kingdom which connect the Arctic Ocean and the Norwegian Sea with the North Atlantic. 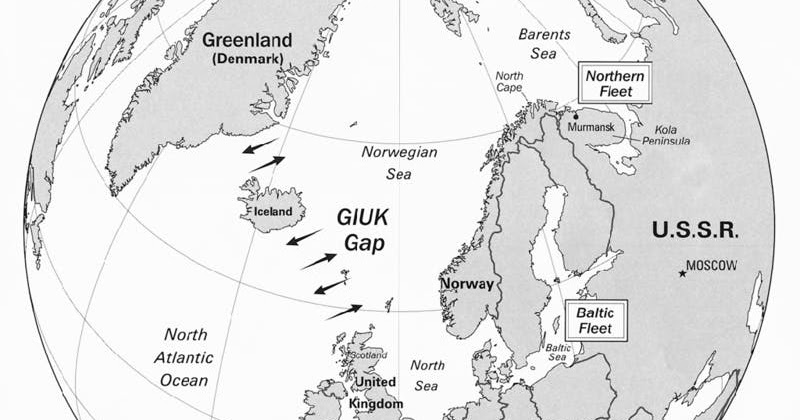 During the Cold War, these maritime passages were the only routes for Soviet submarines to leave naval bases in northern Russia and have access to the Atlantic Ocean. Today is no different, Russian submarines are still monitored as their activity increases. We reported a while back that Russian submarine activity in the North Atlantic had ‘increased tenfold’.

“We’re rapidly having to come to terms with this new age of warfare. Look at Russia’s resurgence under President Putin. Its submarine activity has increased 10-fold in the North Atlantic. That’s not all. In 2010, the Royal Navy had to respond once to a Russian Navy ship approaching UK territorial waters. Last year we had to respond 33 times.”

One of the main tasks of the NATO forces stationed at Keflavík is therefore to monitor for submarines and aircraft in the GIUK Gap.

A network of NATO and Icelandic assets – including Boeing P-8 Maritime Patrol Aircraft, coast guard vessels, helicopters and radars – monitor Russian aerial and submarine activity in the region. In case you weren’t aware, Iceland is the only NATO member state that does not have its own military forces.

That hasn’t stopped Iceland contributing a great deal to the effectiveness of NATO.

Iceland provides facilities and land for NATO, the most notable being the aforementioned Keflavik airport. Iceland also operates an air defence and surveillance system (IADS) which is part of the NATO integrated Air Defence System. IADS supports NATO allied air forces Air Policing missions in Iceland in order to ensure that Icelandic air sovereignty is maintained.

Alliance aircraft regularly deploy to the island for a few weeks at a time for the Air Policing Mission, the most recent at the time of writing being British Typhoon jets and Norwegian F-35As. For more about the NATO Air Policing Deployment to Iceland, see here.

The US also, as mentioned above, operate P-8 Poseidon Maritime Patrol Aircraft from the country.

The best way to establish what Iceland contributes to NATO and what Iceland gets out of NATO is to ask, the Icelandic Government state the following:

“Iceland has been a member of the North Atlantic Treaty Organization (NATO) since its foundation in 1949. Membership of the Alliance and the 1951 bilateral Defence Agreement with the United States of America remain the two main pillars of Iceland’s security policy. With the changing security environment and the transformation of NATO, the contribution of Iceland to the Alliance has also undergone major changes. While having no standing armed forces, Iceland contributes to NATO operations with financial contributions and civilian personnel.

In its work within the Alliance, Iceland inter alia puts emphasis on NATO’s role in disarmament, arms control and non-proliferation, including nuclear issues; the common values of the Alliance, i.e. respect for democracy, rule of law and human rights; collective defence and the importance of solidarity, the transatlantic link and the indivisibility of security. Iceland also stresses the important role of NATO in implementing Security Council Resolution 1325 on Women, Peace and Security; the High North and supports the notion that the Alliance should continue to be open to all European Countries that share the values of the Alliance as well as fulfil its conditions for membership.“

It’s not hard to see the strategic value of Iceland to the rest of NATO today, but what about in coming years?

The NATO Parliamentary Assembly recently argued that Iceland faces a security dilemma: how to keep the High North an area of low tensions as Russia builds up its military presence and China’s Arctic ambitions grow.

“The country’s current strategy relies on a dual-track approach combining realistic awareness of the threat on the one hand, and preservation of the Arctic Council as the main forum for regional dialogue on non-security issues on the other.”

Guðlaugur Þór Þórðarson, Minister for Foreign Affairs of Iceland, recently told a visiting delegation of legislators from NATO member countries that Iceland is no longer sheltered from big power conflicts by its geography.

Therefore, in recent years, the country has increased its contribution to NATO’s common defence activities.

Iceland, carving out a niche in peaceful assistance to the Alliance, annually holds the bomb disposal exercise ‘Northern Challenge’. In 1997 Iceland hosted its first Partnership for Peace (PfP) exercise, ‘Cooperative Safeguard’, which is the only multilateral PfP exercise so far in which Russia has participated.

Russia’s aggression against Ukraine and intervention in Syria as well as Moscow’s growing military activity in the Arctic have seemingly heightened Iceland’s appreciation of the relevance of the Article 5 collective defence clause in the North Atlantic Treaty.

People have long called Iceland a reluctant member of NATO due to the somewhat troubled relationship the country once had with the organisation but I don’t think that holds true today.

Katrin Jakobsdottir, the Prime Minister of Iceland, would appear to agree. The Icelandic PM recently told the euobserver news website:

“We – as the Left-Green party – recognise that there is a strong majority in Iceland in support of Nato membership, but we don’t favour the idea of a permanent military presence here in Iceland.”

People I spoke to, by and large, were quite supportive of Iceland’s relationship with NATO, one notable remark was “you guys need us as much as we need you, is that not correct?”.

I couldn’t agree more, the security of the west and Iceland depend on each other. A protected Reykjavik is a protected Glasgow, a protected Lyon, a protected New York etc.

Iceland is a great demonstration that risk to liberty is not about having a military or not. Instead it can be entire down to geography. The Germans, I believe, were planning to invade Iceland if the RN and RM hadn’t got in there first. If they had then the RN would quite likely have lost the Battle of the Atlantic. You can bet your bottom dollar that Putin’s Russian or China, in the future, wouldn’t hesitate to grab Iceland, either military or via other means, if it was not in NATO. As I have said elsewhere on here China is… Read more »

Good article George-thank you. Definitely on my list to visit.

In the photo of the clash between the Icelandic Coast Guard and the RN-anyone identify the frigate without googling it. Leander Class?

Looks like a straight forward Gun Leander.
The fwd and aft director are GWS21 used on seacat.

Which one?? Cannot say without the pennant number.

HMS Leander I would guess, as she got ramned twice during the Cod Wars…

Ok I cheated,its HMS Scylla.the same pic is on wiki.

Or you could have just right clicked “view picture” same result!!

In 1963 whilst on a major NATO exercise operating out of Keflavik an American told me the Icelanders did not like the Yanks and they hated the British. Apparently this stemmed from the way the Brits pulled out after the war with no compensation for Iceland. Don’t know if this was true or false. Bill

PLAY YA YA DING DONG!