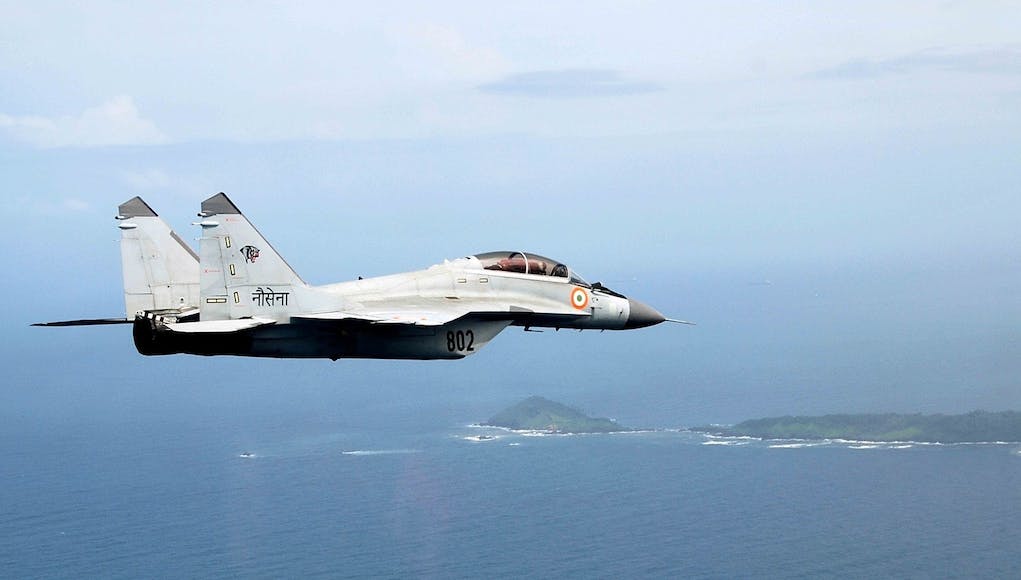 The MiG-29K, the backbone of Indian carrier aviation, is “riddled with problems” due to defects in the airframes, engines and fly-by-wire systems.

A Comptroller and Auditor General report says the MiG-29K fleet – India ordered 45 fighters from Russia for $2 billion for INS Vikramaditya and INS Vikrant – is “riddled with problems” due to defects in the fighter airframes, RD-33 MK engines and fly-by-wire systems.

Consequently, the serviceability or operational availability of MiG-29Ks is pathetic – ranging from just 15.93 per cent to 37.63 per cent.

The newest carrier, INS Vikramaditya, has been designed as a STOBAR carrier capable of operating both conventional fixed-wing aircraft and helicopters, with up to 34 aircraft capable of being accommodated.

The MiG-29K programme itself was revived in response to the decision of the Indian Navy to acquire the former Soviet Navy aircraft carrier Admiral Gorshkov in 2004.

One factor favouring the MiG-29K over the Su-33 in the Indian decision was the larger size of the Su-33, which further limited the number of aircraft on deck.

Modifications were made to the MiG-29K for Indian requirements, including the Zhuk-ME radar, RD-33MK engine, a combat payload up to 5,500 kg, 13 weapon stations, and updated 4-channel digital fly-by-wire flight control system. It is compatible with the full range of weapons carried by the MiG-29M and MiG-29SMT.

You get what you pay for, Åland based design modified for naval use by a country with low experience in fixed wing naval aviation

Lindsey India has been operating an Aircraft Carrier for nearly 4 decades now.

Since all are foreign weapons, everything is beyond India control. Thus, make it yourself to gain my experience and forget how much commission you will get from procurement of foreign weapons.

Well it may be crap but it’s a dam fine looking aircraft.

Land based aircraft modified for naval use…..ask any Facebook Air Commodore and you’ll find out that a Sea Typhoon would be the bestest naval aircraft in the world because the real-world RAF “likes it quite a bit”

Does this Sea Typhoon exist ?
What do you think of the Rafale Marine?
I flew myself 2000 hours on the Etendard (French Navy) on the Foch and Clemenceau aircraft carriers and have 313 aircraft carrier landings…
India bought some Rafale I thought. ..

Not the naval variant and none built yet anyway.

…..
and it has to be “any” FB air commodore that knows little about the status (ie non existent) that would credibly suggest a Sea Typhoon option is sensible.

A “Sea Typhoon” would require to be a complete re-design to the point it would be a New Aircraft. The current Typhoon is too heavy and the airframe not suitable for carrier landings plus 100 other reasons it isn’t sensible at all

Sea gripen was offered too I believe

Yup..but we have our own indegenous fighter which comes in the same class as of gripen and so it wasnt selected

The best aircraft is the uks f35 and the typhoon all day.?

Mig29k is an advanced platform compared to other M29 variants..it was bought as a package deal along with aircraft carrier.. The aircraft was hastily readied for Indian navy even before its induction into russian navy..technical snags and minor bug fixes are yet to get resolved which is the major cause for its lack of operational readiness. One biggest factor is maintenance cost for typhoon or rafael is huge compared to this fighter jet..

Must have been built by Cowboys…

You would have thought the Indians would be wise to theses issues by now. certainly my experience of them on other aircraft procurements is that they are an intelligent and clever customer at military level….no doubt foisted on them by the politicians despite their misgivings.

Nice just throw some more of our foreign aid at it, that should sort it Lewis Elliott