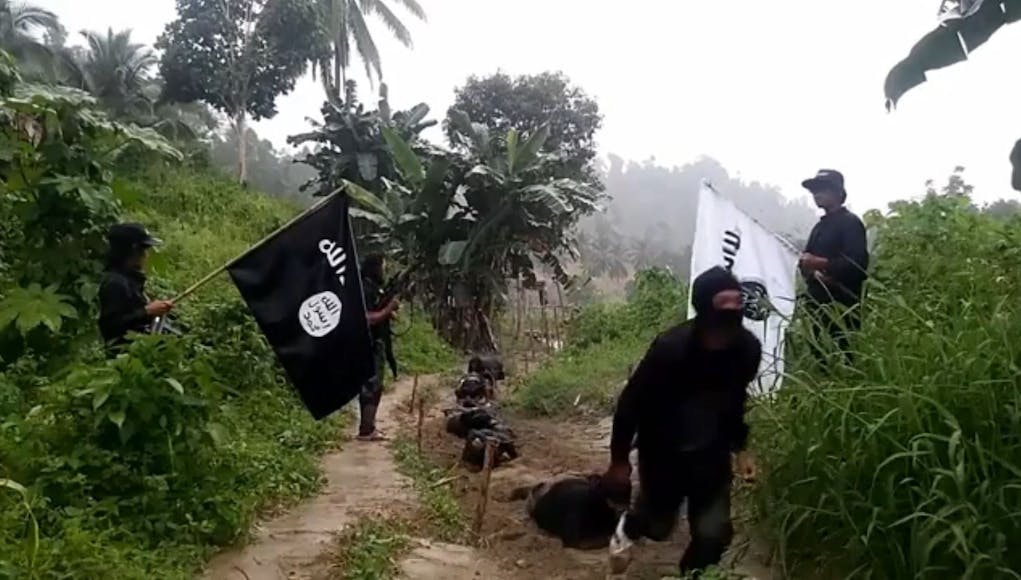 As the war against the Islamic State rages on in Syria and Iraq with their territories contracting, their funds being cut off and the end possibly in sight; Islamic State has emerged in a new corner of the world and is making in roads in the city of Marawi – and poses a bigger threat to the region.

At least 103 people have died since the clashes began between Filipino Security and Armed forces and groups that are affiliated with Islamic State commenced about a week ago. The violent clashes that have led to such causalities have resulted in martial law being declared over the island and no end in sight for the end of such hostilities.

The images of cars loaded with families and their personal belongings and traffic chaos to get off the island with images of armed troop carriers and military personnel heading onto the island show a level of chaos that has not been seen in south East Asia for decades.

This level of conflict began to intensify when the Filipino Government launched an operation targeting Isnilon Hapilon, a man that was designated the ISIS emir for South East Asia however the offensive is only expected to intensify. With Hapilon surrounded by the Government forces, he is reportedly making calls to rebels groups also affiliated with ISIS to provide assistance in their fight against the government. When these ISIS affiliated groups arrived in the hundreds, they began to take hostages, burn buildings to the group and engage in intensive warfare with Government Forces.

President Duterte has already declared martial law on the island in order to ensure that hostilities reduce and has already suggested he might extend martial law until the end of the year and impose it nationwide, which has already shocked many critics of the government and survivors who lived through the dictatorship of Ferdinand Marcos even though support of the martial law was expressed in a declaration by 15 of 23 senators. President Duterte has stated that he will only listen to the PNP and AFP on martial law and is waving off criticism of such calls even though he is currently under fire for telling Filipino troops they can sexually assault women and not fear prosecution.

Many analysts are saying that it may become a matter of time before ISIS declares a wilayah (a state of the caliphate) in South East Asia like it has done in Libya and Saudi Arabia. The Filipino Solicitor General has stated that the clashes have shown that Marawi is turning into an invasion by foreign terrorists opposed to a rebellion by Filipino citizens, which could lead to the creation of a stronghold in South East Asia, which will create a national security risk to the surrounding countries including Australia. This is already on top of the fact that 60 groups within South East Asia have already pledged their allegiances to the Islamic State and a stronghold within the Philippines could lead to a much higher risk of terrorist attacks in the region and a victory that the Islamic State should be denied.

Regional Cooperation could become an issue when it comes to fighting terrorism – a lot of the counter terrorism and policing efforts are being conducted on a national level and geographical and sovereignty issues, competing territorial claims and regional politicking is hindering regional cooperation and old rivalries are stopping this as well. The Philippines is going to have a hard time trying to eliminate the threat that the Islamic State poses and with the conflict continuing in intensity and martial law to be extended, there is no end in sight.

My wife has relatives living on Mindanao. Fortunately, they are several hundred miles from where the current fighting is happening, but their area has seen various bombings and other attacks over the last decade or so by Abu Sayyaf. Prior to that, it was mainly Marxist guerillas the government was fighting, now it is Islamist jihadists, who have seen the main chance and allied themselves with Islamic State. The government, first under Marcos, then under various elected presidents have been fighting against various groups on Mindanao and more generally over the whole country. I agree that the situation is serious… Read more »