A report by the Defence Select committee published today has criticised the MOD’s use of the anti-malarial drug Lariam, opening the door for legal action by victims.

The drug Mefloquine, sold under the brand name Lariam, has the potential to cause serious side effects such as anxiety, depression and has been linked to suicide attempts. The MOD has been criticised by the chair of the select committee, Dr Julian Lewis, for dispensing Lariam in “large numbers” with health warnings being “disregarded”. Speaking to the BBC’s Today programme Maj Mick Wallace, who served in Kenya and was prescribed Lariam, believed the drug had led to his severe depression, saying “I just didn’t feel right and it’s still going on”.

The risks associated with the drug are well known and circulated by the manufacturer, Roche, who stopped marketing Lariam in the US in 2009. A report from the government body responsible for regulating healthcare drugs in the UK, the MHRA, highlighted the dangers of the drug. The MHRA warning stated that Mefloquine containing drugs, such as Lariam, may cause:

Psychiatric symptoms associated with use of mefloquine such as nightmares, acute anxiety, depression, restlessness, or confusion should be regarded as potentially prodromal for a more serious event. Cases of suicide, suicidal thoughts, and self-endangering behaviour such as attempted suicide have been reported in association with use of mefloquine.

The law firm Hilary Meredith Solicitors reports that they have been contacted by 470 current and former service personnel who have suffered from mental health issues after taking the drug. Philippa Tuckman, a partner at the firm who also gave evidence to the enquiry, stated:

“I have long campaigned for the MoD to recognise that the casual way in which it has administered Lariam to service personnel over many years constitutes yet another breach of its legal duty of care towards our military personnel.

“Service personnel have a tendency to be so dedicated that they think only of the duty they owe; it doesn’t occur to them that it should go both ways. Sadly, the MoD will sometimes take advantage of that to get away with providing dramatically substandard care. That is not deliberate, but the catastrophic effect on the lives of our soldiers, sailors and airmen and women is the same as if it were.”

The report recommends Lariam is only prescribed as a “last resort” when other anti-malarial drugs are unsuitable for an individual and only after a face-to-face risk assessment has been carried out.

I remember being advised of the possible side effects when I went on holiday to Kenya back in 1997…. This issue has been known about and publicised for many years!!!

Not sure why Lariam is drug of last resort, in Cambodia in 1993 we used Doxycycline, it also had side effects (they all do), they included reduced pigmentation, thus higher chance of sunburn, heartburn and, most unhelpful, semi-erect status! But we only had one death from malaria in Brit mission and that was because he stopped taking it, because of the side effects. All anti-malarials have side effects that effect some more than others, what cannot be disputed it that they do prevent you from getting Malaria and dying! Our chap in Cambodia, RAF Officer, alive one day, dead next… Read more »

Neil, I need to correct you on one point in that you state the drugs may F**K you up but they won’t kill you. In fact there have been a lot of suicides and suicide ideation associated with Lariam. More recent safety updates by Roche the manufacturer now list the risk of actual suicide, suicide ideation and self-harm. Yes, you are correct that all anti-malarials carry a risk of side effects but there is a big difference between treatable short-term physical side effects and the serious predominantly neuropsychiatric side effects associated with Lariam. It should also be noted that a… Read more » 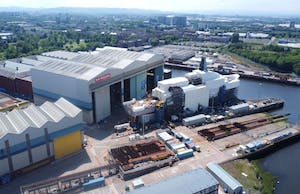 June 13, 2022
Chairman of the Scottish Affairs Committee Pete Wishart, SNP MP for Perth and North Perthshire, has cited 'regular orders' for Royal Navy ships and 'increased investment' as being responsible for the 'good shape' of the shipbuilding industry in Scotland.