The MoD say the jetty will improve military capability in the Falkland Islands and improve life for personnel on the Islands.

The improvements to the roll on roll off jetty are part of a £19 million contract with VolkerStevin for design and construction. 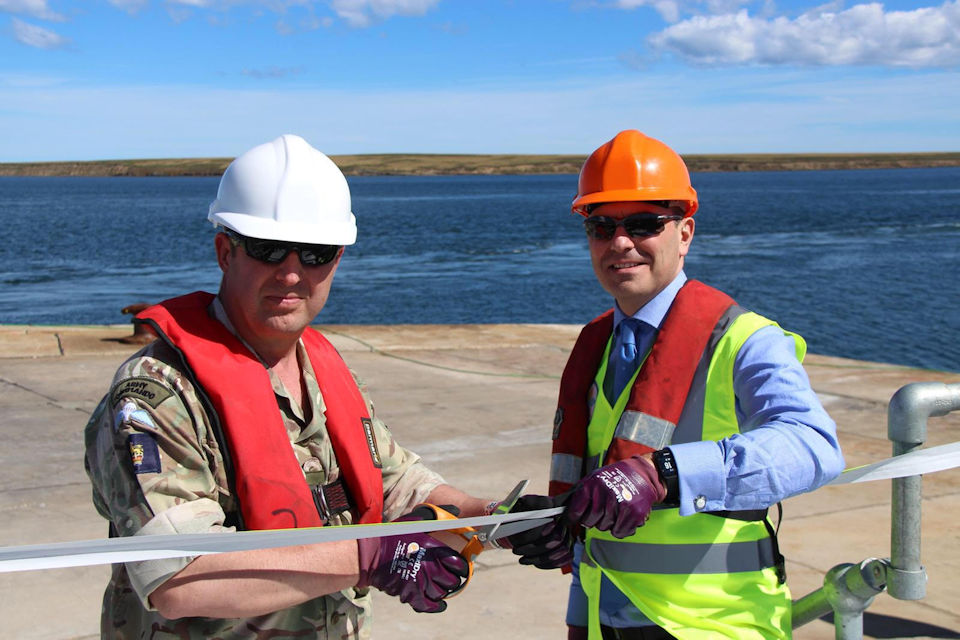 The new facility will enable larger 20,000 tonne Point Class vessels to berth in the harbour, delivering up to 85% of the military supplies such as hardware, food, building materials and commercial freight needed on the Islands. According to the MoD:

“The new berthing facilities on the jetty will allow goods to safely roll on and roll off from the Falkland Islands Resupply Ships (FIRS). The deliveries made by these ships are vital to military capability, maintaining life on the Islands and to ensuring the complex schedule of building and development works continue as planned.

In addition to the jetty, VolkerStevin has also replaced walkways along the berth, lighting improvements, capstans and a PA system. Firefighting capabilities have been upgraded as well.”

According to a press release, the £19m contract is part of a £180 million overall investment by DIO to improve facilities on the Islands over the next 10 years. Additional works include improvements to the power station at Mount Pleasant Complex as well as new services accommodation at the 3 Remote Radar Heads on the Islands. There are currently around 1,200 military and civilian personnel based in the Falklands supporting defensive air, naval and land assets, including RAF Typhoon aircraft, helicopters, Royal Navy patrol vessels and an Army infantry company.

“The opening of this new jetty is an important milestone in our 10 year programme to modernise defence infrastructure on the Falklands. We’re investing £180 million on the Islands that will benefit its residents, as well as service personnel and their families who live, work and train there.”

“This new jetty will improve military capability in the Falklands as the previous harbour berth was unsuitable for the new Point Class ships. This significant investment by DIO will modernise defence infrastructure in the Falklands for years to come as well as enhancing life on the Island for our personnel and their families.”

“Improving our RoRo facility here has been vitally important, and allows us to safely berth the much larger vessels needed to sustain our military capability here in the Falkland Islands. We were delighted that DIO appointed the experienced maritime company, VolkerStevin, as their prime contractors, a clear investment in proven quality. In particular their safety and environmental awareness has been excellent, and the opportunity to work with Falkland sub contractors has been a really important initiative.

Delivery of the new facilities here at East Cove Port, to time and very high quality, is the outcome of good project management by the prime contractor, and an excellent relationship with myself and the port as clients. We now have a really robust facility that will last for many years to come.”

“We are delighted to have handed over the Ro-Ro berth a month early, this latest berth upgrade continues our successful relationship with the DIO and the Royal Navy.”

Type 22 in the headline image? You’re better than that.

Its just a stock photo

Point class could already berth as seen by the photo but an improvement nonetheless.

‘New’ Point Class? I think they’re stretching the meaning a bit there. In service since 2003.

See what you mean, but I don’t think they ment it like that.

Why do you continue to publish ‘old content’? HMS Somerset decommissioned in 2011. Why not include a link showing up to date images from those that know? Sloppy work – lazy research?
See – http://www.volkerstevin.co.uk/en/news/detail/improvements-to-mare-harbour-jetty-in-falklands-complete

Apologies I should of course said “HMS Chatham” decom’d etc.
Somerset currently in Gib with QE – Somerset is now in Gib with QE: https://www.flickr.com/photos/davidparody/sets/72157693220774515/

By the by, does anyone know how much those Point Class vessels cost?

Not sure how much they cost to build, Joe, but the MOD has them on a 22 year charter.

So every ones delighted then. good oh

Can anyone tell me about a pub or tavern that may have existed near the jetty or at the airport around 1986 to 87. This would be a facility frequented by British sailors.