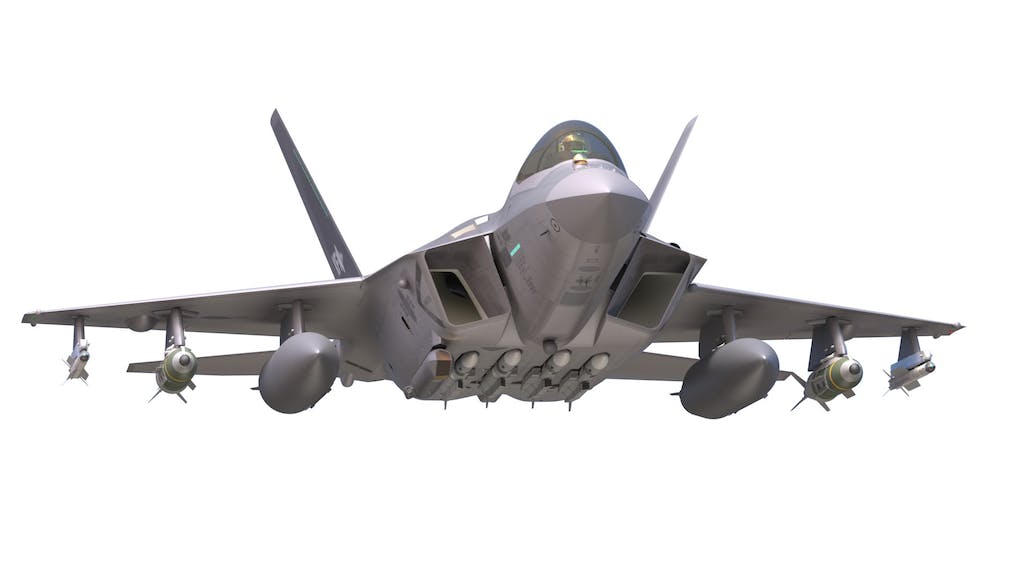 MBDA has been awarded a contract from Korea Aerospace Industries (KAI) for the integration of the Meteor beyond visual range air-to-air missile onto the KF-X future Korean fighter aircraft.

The contract includes integration support to KAI, transfer of know-how and manufacture of test equipment for the KF-X integration and trials campaign.

According to a news release from MBDA:

“Meteor is the world’s most advanced air-to-air missile, and has a unique ramjet propulsion system that allows it to fly further and faster than any other air-to-air missile – allowing it to defeat manoeuvring targets even at extreme ranges.”

“We’re very pleased to mark this next and important step in our partnership with KAI and the Korean Defence Acquisition Program Administration. South Korea is a strategic market for MBDA, and we’re proud that Meteor will be providing KF-X with the world’s most potent air-to-air capability.”

The company say that this represents the fourth contract award Cobham has earned from KAI in support of the KF-X program. Other Cobham solutions selected by KAI for KF-X include Missile Ejection Launchers, a full range of Communication, Navigation and Identification conformal antennas, and external fuel tanks and pylons.

“Cobham Mission Systems, the market leader in military life support oxygen systems, will be leveraging its latest Next Generation Oxygen Concentrator technology, as well as the newly developed Electronic Seat Mounted Regulator to outfit the KF-X aircraft.  This high-reliability system will not only meet or exceed the current requirements, but will be capable of spiral upgrades as new technologies, such as pilot breathing sensors, are introduced in the future.”

I read previously that Meteor started out as a British MOD project and had other European countries join. But nowhere can I find details on how much of the Meteor is British?

Anybody able to answer my question?

Based purely from what I can find on Wikipedia and some deductions, the radar is Thales, the fuse is Bofors, the warhead and motor are from German companies, and the control system and the rest are from British companies or UK-based subsidiaries like MBDA UK.

Basically it’s a British missile with the best European components cherry picked from the continent.

Indeed. Like most things ‘British’ these days we legislate for it as a project, set requirements and fundamentally very often design these things from concept down during which point it starts to get somewhat more grey as it gets to the more micro managed componentry. And then starts the cherry picking where major components more often than not starts to become far less British in origin. I believe the European propulsion systems almost inevitably originate in Germany now as in this case, as will much of the electronics be European or from even further afield. In that regard Meteor itself… Read more »

I don’t see that as a particularly bad thing. It would be daft of us to ignore more advanced and available allied components just to develop our own domestic version, simultaneously increasing our own costs while making the missile less attractive to for those allies to adopt. The important thing is that we maintain industry as a whole, instead of trying to make every single component British. Take the ramjet motor for example: Rolls Royce are one of the top 3 engine producers on the planet and could certainly have built the motor, but getting them to design a custom… Read more »

Agreed it I’d good to have the best bits from wherever, however this can backfire for instance German blocking exports etc ie the Saudi aircraft orders , so a solution for this should be sought maybe a UK based subsidiary office

That all makes sense. Whether folk like it or not, defence is another industry that is about making money. If you can ‘bring in’ another country to the programme to save money and sell them equipment then kerching.

I’m not against a one country weapon system, but they’re getting thinner on the ground, certainly outside the ‘big boys’.

Agreed there is a lot of politics at play as well. There is no way the French and Germans would have ordered it if the components where 100% made in the UK no matter how good it was. Better to get the costs down through EOS of scale and exports and if the component makers are genuinely competing they should be the best of the best.

I think the Meteor programme is a significant UK success story. We started it, wrote a spec that was impressive enough to meet a wide range of needs and then put in a development / production strategy that took just enough risk to produce a cutting edge and cost effective of bit of kit in a very reasonable timeframe (by modern standards). Buying advanced tech from a broad range of allied countries meant we negated political “not made here” arguements opening up a ready made market for a very capable system. British companies get to sell an increased number of… Read more »

Most of that range is almost useless since in combat pilots are forced most of the time to VID their target before firing. That will be even more evident with increased use of ECM, EA, ect that will make it very difficult if not impossible for long range sensors to positively ID a target.

If anything with modern IRST its become a whole lot easier to VID a target. But its a reasonable point, in the limited air wars where coalition aircraft have been massively in the ascendancy that has been the rule. The chances of friendly fire have been too high. But would VID have been necessary in the last war when UK forces launched air to air missiles? The Falklands? If Sea Harrier had had Amraam then they’d have been able to use its full capabilities. Anything travelling at speed over East Falkland could have been safely engaged. But Meteor isn’t designed… Read more »

Yes a lot of the time today the pilot wont have VID but will be directed on to the target by AWACS/Ground Radar/Drone, Meteor is designed to be remotely guided to the target area then actively seek a threat. In a full on air war civilian craft will have been warned to stay clear and all allied positions will be shared (or at their own risk be it).

IF we consider the last major conflict where aircraft took out other aircraft i.e. The Gulf War Part 1. Visual identification had to be carried out, as not all the “Allied” aircraft had the most up to date IFF. Jordan made the decision to ground all its aircraft, Israel patrolled its borders, as did Turkey, Syria and Iran. The aircraft used by Oman, UAE, Bahrain and Saudi did not have the latest NATO IFF. Therefore, the aircraft being detected over Iraq had to be visually identified. It didn’t stop the US or the Saudis using medium range semi-active Sparrows to… Read more »

This is why I dont understand why we have kept Captor for so long. Would the Typhoon not have been better off with a PESA radar even to start with if it has a lower chance of intercept. I don’t know the first thing about Radars but what is the point in having one if you can’t use it incase it gives you away?

Like a electronic equipment it can be DF’d. The radar l used to work on we were only allowed to transmit up to 3 minutes at a time. I’m sure it’s a lot shorter these days.

I’m surprised there is no internal weapons bay at all, even for purely air to air engagements. What is the point investing in stealth if you lose most of the benefits by externally mounting missiles.

I thought about that too. Its been an very protracted programme, which originally used an F-16-based design, a little like the Japanese F2. That was put on the back burner and then revived as a more modern stealthy design. The cost has been exorbitant. I guess RSK wants some autonomy in combat aircraft production and to build on the success of the Golden Eagle. I’m sure we’ll see lots of F-35s with stuff hanging off them in future decades too, where stealth is not required. But still, the KFX appears to only a semi-stealthy design at full load.

They seem to be recessed so maybe they think that will reduce the RCS enough not to need the internal bays. I’m still not sure how reliable stealth is within 100 miles, modern AESA radars are bound to pick them up so to a certain point maybe the fractionally reduced RCS is just not worth the additional cost.

The Indonesians pulled out of the project a short while back and the design was frozen last year. I suspect the whole process has gown like topsy from a fairly straightforward F-16+ development of their licensed production agreement, into an ever more expensive and ever changing monster. I guess the lack of a weapons bay exposes the design’s origins as a Generation 4 aircraft, with a shiny new Gen 5 stealthy skin.

You can see a T50 + KFX package being an attractive export option for the likes of Malaysia and Saudi down the road, but they will have to heavily subsidise it to compete with Su-30, Rafael, Typhoon and Gripen. Still the lack of reliance on the US, China or Russia might be attractive to some. Countries like Pakistan, India, Gulf States and the original partner, Indonesia are sure to be interested.

Cobham just sold to the US speaks volumes as to who wants to control what. When will UK ever learn and grow a pair?

I think the government needs to question the wisdom of allowing these companies to be sold Private Equity companies that are only interested in maximising short term returns through asset stripping, laying off staff, cutting investment and piling the company full of debt to pay high dividends. The UK is all about the short term profits.

that’s exactly what will happen with Cobham within 5 years pursuant to the sale contract restrictions.

4th, that’s just the latest example of dozens of national security related UK companies being sold off to the US in the last 24 months, with minimal government concern or appreciation. Sophos is next, a highly respected, highly used, little known cyber security company. Mrs. “Landsbury” doesnt know what she is doing. In a bizarre perspective a neighboring EU nation just stopped a painting from being sold overseas last month. A painting!!!!!!!!!!!!!!

The Americans are laughing at the ridiculous restriction the government placed on selling this critical national security business.