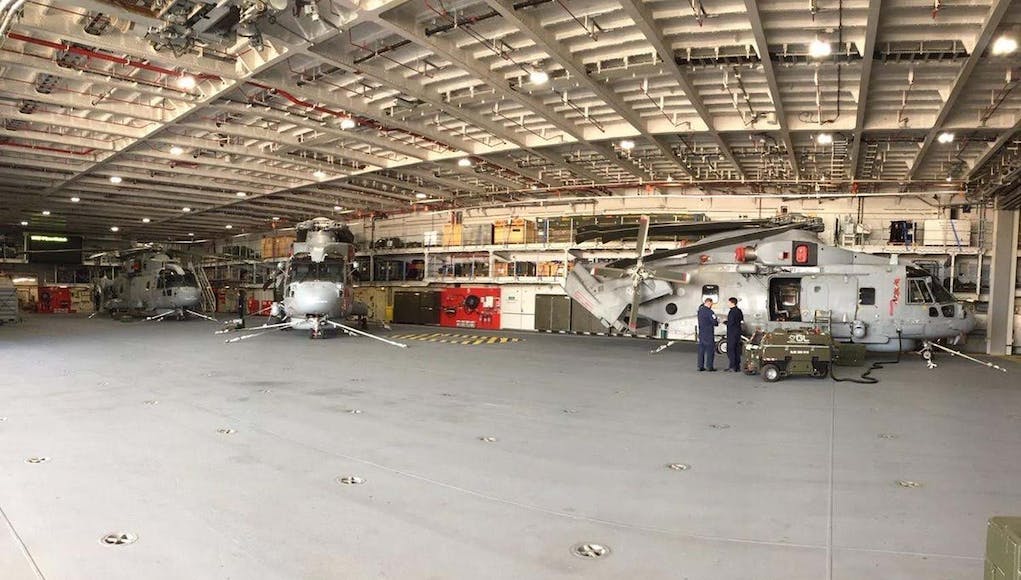 820 Naval Air Squadron have embarked on HMS Queen Elizabeth with their Merlins to support her forthcoming F-35B flight trials.

According to the Royal Navy, extensive trials over the next four-month period will take place off the Eastern Seaboard of the United States with a view to developing the operating envelope – the parameters for safe operations – of the F-35.

820 NAS has been working with HMS Queen Elizabeth since the day she sailed, conducting the first deck landing last year and in February they embarked to support her helicopter trials.

The Commanding Officer of 820 NAS, Cdr Chris Knowles, who took command of the squadron in July, said:

“It’s a really exciting time for 820 squadron and for me personally. To take command of a squadron on the brink of a career defining deployment, with great people, all of whom are keen, professional and very much looking forward to getting on with their job at sea.

We’ve been cycling all crews through a thorough pre-deployment training package to make sure everyone is current and qualified to go. Our force protection role will be key to the ship at sea, as will our SAR capability, we’re ready and able to provide whatever support Queen Elizabeth needs.”

“The embarkation of 820 NAS, and other members of her Air Group, represents another significant date in the development of HMS Queen Elizabeth and her capabilities.

The Squadron’s focus since the completion of the first deck landing last year has been very much centred around the First of Class Flying Trials with F-35B. The Eastern Seaboard deployment represents an exciting opportunity for the Squadron’s aircrew and maintainers to fully experience life on-board this amazing Ship.

It’s why people join the Royal Navy and I’m hugely jealous. To get to this stage the Squadron have spent time honing their skills both to meet the rigours of the embarkation and to prepare for any other emergent activity. This is the first of many such deployments for 820 NAS, in the longer term the Merlin Mk2 will also deliver the Crowsnest Airborne Surveillance capability to QEC.”

Is this the full unit strength or just the 3 Merlins shown? Just interested, not a comment on numbers or anything.

Hmm yes good question. With only 30 to go round 3 operational squadrons and the OCU we are hardly blessed with numbers anyway. What a surprise. What is the establishment strength 9 Cabs?

Supposedly there are to be 4-5 AEW Merlins, and 9-10 ASW Merlins in normal configuration. Probably will not be that many in the trip to the US though.

Look a bit lost in that hanger don’t they?

Better than being cramped! 😉

Yes, but at some point they need to do cramped, or at least maximum realistically planned operating capacity which I suspect will verge on cramped. I suppose that’s where embarking some USMC airframes is going to come in handy to work up the full-capacity operating procedures. Not for this phase of the trials though, that is yet to come I am sure. Really happy to see her moving towards this next critical milestone of first F-35B tests though. We’ll get to see that ski jump in action for the first time :).

WTF – both versions came out perfectly that time. I think maybe not putting the space between an emoticon and a full stop must be the issue. Oh well, now I know. Sorry about the distraction. As you were 🙂 .

I must admit I chuckled at this. Sorry Julian 🙂

Ah, maybe what you need if it works is this 😎

Ouch, that’s the SAC Security Police at the door … 🐖

Clubs is going to love all that space.

I heard at a discussion at RIAT that they were in storage. No reason they could not be dusted off and refurbished. The airframes probably would then still have thousands of flying hours left in them.
Cheaper than purchasing new ?

Cannibalized as part of the HM2 upgrade I believe. At least to the point where they are no longer viable for upgrade themselves.

A bit OT but relevant IMO… Does the this article about the challenges facing the Japanese home grown defense industry remind you about the same in another island nation we are familiar with?

Helions – yes another interesting article thanks,just wonder how soon Japan will become a major player (if at all) in the Arms export game ?

Hi Paul, It’s going to take a while to spool them up. Particularly since Japan Inc. has so little experience in the arena. The first major attempt was the unsuccessful offer of the Soryu class SSKs to the RAN. Japanese defense products are of the highest quality but designed with only the needs of the JSDF in mind. The Japanese will have to prove that they can be adapted for the customer without major cost increases. This IMO will be the first major sale abroad. I really wish the USN would look at these. They are an excellent way to… Read more »

Evening all
3 cabs is plenty to provide watch keeper station for FJ air moves.
This is not a full capability exercise but FJ trials off the island.
Majority of 820 crew will go to give them experience of sitting off the carrier whilst air movements are taking place, expect to see lots of aircrew recovery exercises taking place.
Don’t worry about the numbers of helicopters, look at the capability maturing…..on time and to plan. Not something you normally associate with the MoD ?

Lee. Where have you been? Sure I’ve not read your posts for many months.

Hi Daniele
Very busy last couple of months, reading the blog with great interest but just haven’t had time to respond.
Good to see you and Gunbuster keeping everyone sane, always amusing to read some of the interesting arguments WRT numbers of platforms and the want to be everywhere all at the same time.
T31e has kicked off again, £250m will be tight but manageable.
??

Cheers Lee glad you are still around, even if only lurking.

4 months. Mmm. So does that mean mid-Dec rather than Oct for the first F35-B landing / take-off?

I hope it’s by the end of this year or my name will be mud in places where I’ve had to defend the “Aircraft carrier with no aircraft” madness. And yes I know the Merlins are aircraft.

Royal Navy personnel in thanks to NHS staff