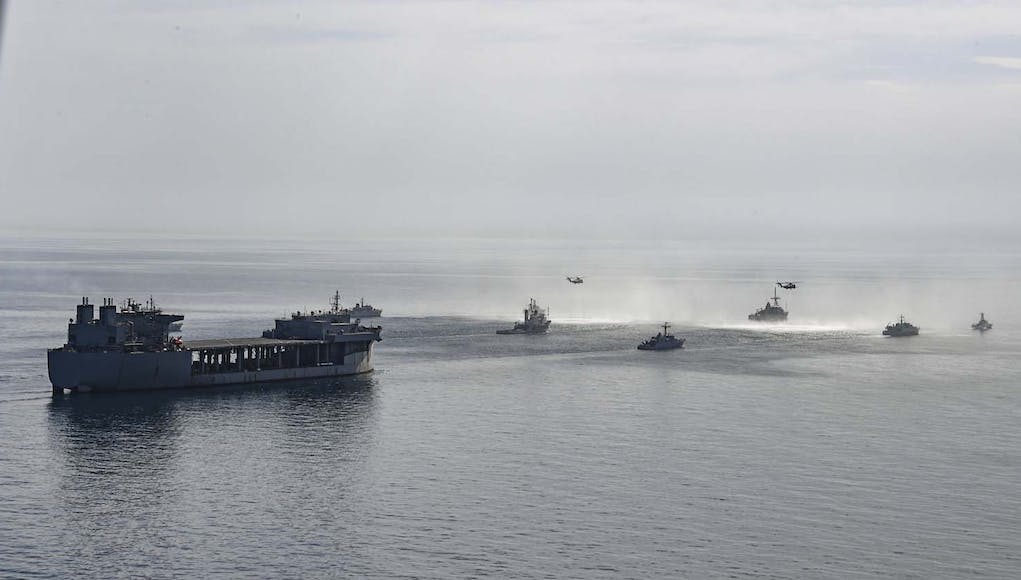 HMS Ledbury took part in a joint Anglo-French-American mine hunting exercise in the Gulf.

According to the Royal Navy, two of the UK’s four Bahrain-based minehunters, plus their mother ship, joined two Marine Nationale counterparts and half a dozen US warships and patrol craft for Artemis Trident.

The US and UK both maintain a permanent mine warfare force in the Middle East and regularly train side-by-side.

“As for the ‘Fighting Aces’ – 2nd Mine Countermeasures Squadron Crew 1, currently in charge of Ledbury for six months as part of the rotation of sailors in the Gulf – they ran out their dive team and remote-controlled mine disposal system Seafox to deal with the dummy mines peppering the sea for the exercise. They started at the easy end – a buoyant mine (big, round, floaty, basically your traditional mine, but without the detonator spike).

They are cheap, easy to produce and lay, lurking just below the surface waiting for unsuspecting shipping traffic to just run into them. Ledbury’s divers had to options: to send the mine to kingdom come by placing a small detonation charge on it, or render the device safe then bring it back on board for analysis, to find out what makes it tick and pass on the information to anyone else who might come across a similar mine.”

A frigate and 4 minehunters? Looks tokenistic. I wonder how long they will last against Iranian submarines and supersonic cruise missile storms.

What Frigate? That looks like the USN support vessel it ain’t no Frigate.

They would not last 5 minutes as you know, but they are not there for that, protection lies elsewhere.

Their support vessel was one of our Bay’s, which is not in the photo.

That’s if Iran is still under its belligerent theological rule! Trump has fully recognised the dire threat to Israel if the Mad Mullahs acquire even a “short range” nuclear capability.

National defence is one thing, international terrorism is another!

Ah more comments about a subject he knows zero about! Keep spouting son, it’s at least amusing for serious commentators.

You have never done Asw in the Gulf then.
With a TV camera and some filters you can see subs and mines all the way to the bottom.
It’s mostly less than 60m deep so not great for a sub.
I could teach you the pros and cons of sub sonic V supersonic missile engagement, range advantage V speed advantage and the need for mid course guidance but I cannot be bothered.
Let’s just say the RN is going to be fine with Montrose in the region.

I was just thinking that the Iranians tend to target us rather than the US when they have a point to make because they know we can’t retaliate. For example, the storming of our embassy and the boarding of our naval RHIB in 2007 while they was inspecting a ship. I understand that Able Seaman Batchelor did sterling service for the Royal Navy and started to cry when one of his interrogators commented that he looked like Mr Bean. Although he could’ve also been suffering with PTSD because he complained the Iranians kept his iPod. This is why tokenism is… Read more »

We have 14 billion per year in soft power! I say 4 billions enough.

Iqbal
I sense a degree of derogation toward British forces in your writing.
In 2016, two US patrol vessels and their crew were held by Iranian forces near Farsi Island. The official report put the capture down to weak leadership and poor judgement.
Like someone has also mentioned, visibility (from the air) alone, is a massive disadvantage to Submarine warfare around Iranian waters.

OK …True dit no S**t and i have the photos to prove it! I was doing that same boarding job on a different ship (T23) some 8 months earlier in exactly the same position as the ship was anchored in the later incident. I can confirm that where the boarding’s where undertaken is in international waters! We never had any issues with the IRG and I completed over 55 boarding’s in a 3 month period. That was due in a large part to the IRG trying the same thing with the Aussies who where out there at the same time… Read more »