The Ministry of Defence has denied the United Kingdom has failed to reach NATO’s defence spending target of 2% of GDP.

British defence spending was 1.98% of GDP in 2016 say the International Institute for Strategic Studies, below the 2% target set out by NATO.

“These figures are wrong: NATO’s own figures clearly show that the UK spends over 2% of its GDP on defence. Our defence budget is the biggest in Europe, the second largest in NATO, and it is growing each year as we invest £178 billion in new equipment and the UK steps up globally, with new ships, submarines and aircraft over the next decade.”

“Nonetheless, the UK remained the only European state in the world’s top five defence spenders in 2016. If all Nato European countries were in 2016 to have met this 2 per cent of GDP target, their defence spending would have needed to rise by over 40 per cent.”

The United States has repeatedly called on European allies to contribute more and in recent years NATO’s Secretary General described declining European defence budgets as unsustainable when compared with increased Russian spending on its military.

The 2% target is clearly non-science, only a handful of countries make it and so we should forget about it and focus on capability. It seems the government is spending way too much time focusing on fudging figures to say its making this fake target (and i suspect we are not alone and all other nato countries are doing the same). I would rather the debate around capability rather than constantly this stupid figure.

If there was a set way to calculate it, we could compare country vs country, but clearly its heavily open to interpretation and so non-sense.

Good reply. We need to decide what we want to do based on a foreign policy that is cohesive. No matter how small or how large our commitment the defence budget should be about making sure that we have the finest equipment for what we have decided to achieve, not the other way around.

Easy go for 3%, less chance to dip below the target. 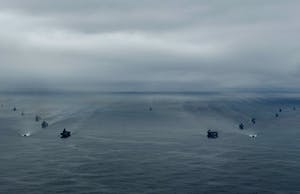 May 17, 2021
15 warships including a British aircraft carrier and an American helicopter