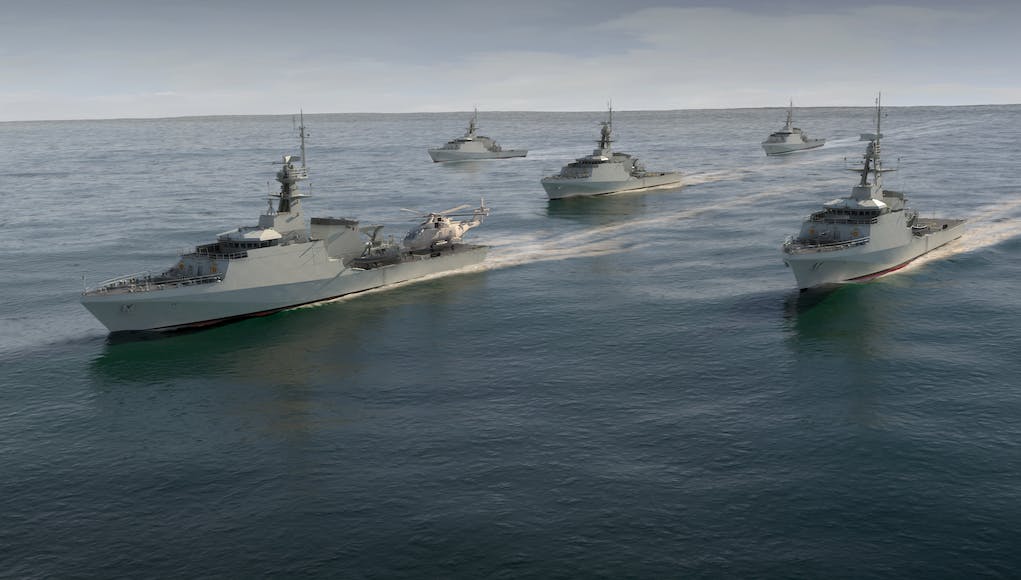 It is understood that the Ministry of Defence paid an extra £100 million for new Offshore Patrol vessels in order to satisfy a requirement to pay BAE a minimum of £230 million per year.

A house of Commons Briefing Paper explains the agreement:

“In 2009 the Government signed a 15 year Terms of Business Agreement (TOBA) with BAE Systems and Babcock. The TOBA guaranteed BAE Systems a minimum level of surface ship build and support activity of £230 million a year.

This was judged as the minimum level of work possible to sustain a credible warship-building industry in the UK and thus avoid the delays encountered during the Astute class submarine build caused in part by the loss of skilled staff following the gap between Astute and the Vanguard class submarine build.

If cancelled the MoD would be liable for industry closure costs and compensation to BAE Systems.”

“Philip Hammond, then Defence Secretary, admitted “we are effectively ordering the OPVs to soak up money we would have been paying in any case to have these yards stand idle.”

Lord Astor of Hever said the Government provisionally agreed a firm price of £348 million with BAE Systems for the supply of three OPVs, inclusive of initial spares and support. He said this sum is “entirely contained within provision set aside to meet the Ministry of Defence’s obligation for redundancy and rationalisation costs.”73 Mr Hammond estimated the additional cost to the MoD of the ships, over and above the payments the MOD would have had to have made to BAE, is less than £100 million.”


The first of the five new vessels, HMS Forth, is expected to be handed over to the Royal Navy in 2017.

So they could have fitted a decent size main armament at no extra cost?

They could add a hanger too.

I’m sure there’s already a hanger for the captain’s uniform. 😉

And a trouser press

Still think they could get a cheap and relatively new offshore supply vessels to replace RFA Reliance and Argus. These vessels are being laid up with the downturn in the oil and gas market.

Surely thats 8 cells of CAMM each.

As I’ve pointed out to you before, you are mistaken if you think this briefing paper represents new news. It is merely a collection of publicly available data put together to level set those that wish to debate the upcoming FSS. The author has no inside information and is not leaking any new news.

But you keep censoring away, I’m sure that serves some purpose. SMH.

Ok Ron, we’re aware of that, thanks for the input.

These are poor excuses for warships. What were the MOD and NAVY top brass thinking? Why not look at the Irish or Spanish OPVs for decent ships that have presence and potency. The same thick top brass allowed the NAVY to not have any anti ship missiles on our helicopters once Sea Skua goes.

No anti ship missiles at all you mean. The Navy top brass are forgetting they actually have to sink the enemy ships.

This may not be new news, but it is right to keep the MOD to account on all it’s ill managed fiscal spending.

i would have told bae to swivel since the destroyers they built are not up to scratch with propulsion failures,they were the ones who designed and built them giving suppliers specs to work to,so the book should stop at them,so i would have said no your not getting the money simple,s

Why did they not just order an extra ship for free

Why not fit proper guns.