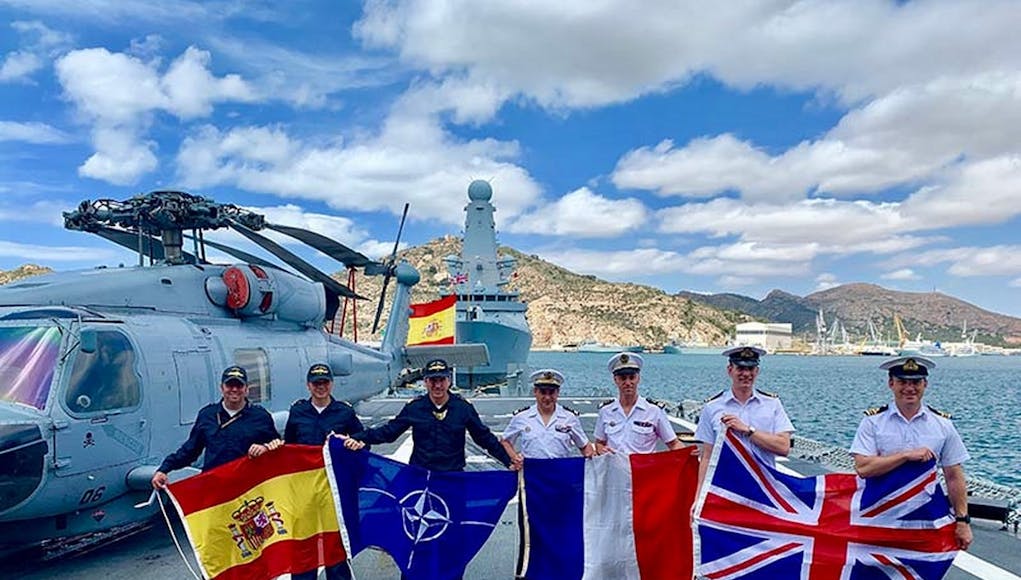 NATO is continuing its Focused Patrols under Operation Sea Guardian.

The Task Group is under the Command of Commander Pedro Cardona (Spanish Navy), Commanding Officer of the Spanish frigate ESPS Reina Sofia and includes the French frigate FS Courbet, the British destroyer HMS Duncan and an Italian Navy submarine.

“OSG has proved vital for the security of NATO countries, since it allows us to better understand the maritime domain in the Mediterranean and, thus, to identify situations potentially linked to terrorism or other criminal activities” said Commander Cardona.

“The interoperability of all these naval and air assets, is a key enabler to achieve our objectives.”

NATO say that the security patrol is focused on gathering information about activities at sea and investigating possible maritime security issues.

“As part of maintaining an understanding of activities at sea, the ships of OSG visit many different vessels in the Mediterranean in order to get a better understanding of what is going on and possible security concerns.

So far on this Focused Security Patrol, the ships have visited several ships including commercial, fishing and pleasure boats.”

During the visits, ship’s boarding teams inspect a vessel’s documentation and also exchanged pleasantries with fishing and pleasure vessels and shared information about what is going on in the area.

Support and cooperation from maritime patrol aircraft and NATO’s E3 airborne early warning aircraft as well as submarines enabled the ships to maintain a multi-domain view of maritime activities, say the Alliance.

Given the way that the Spanish Navy has been acting recently in regards to Gibraltar, I am surprised that we are still ding stuff with them. I know it is NATO etc, but their childish behavior of late has been a bit over the top.

Type 31 should be a more capable ship that either the Spanish or French ships referred to above.

Call me a pedant but the Naval version of the Union Jack should be proportioned 2 to 1 and the blue should be the dark Naval blue!!

H4cked Off
Reply to  geoff

geoff
Reply to  H4cked Off

Technically, wouldn’t that be the Union Flag since its not actually mounted on the ship, but being held by enlisted personnel?

The Union Flag tag when flown on land has fallen away Matt. It is now permissible to call it either UJ or UF on land according to preference. I also think the 2 to 1 requirement is slipping away along with other long standing traditions. At least they are holding it right way up! Regards

Not a coincidence all the countries in this exercise border the Mediterranean. That’s likely the real reason why Germany is absent

What and where is that facility in the main photo?