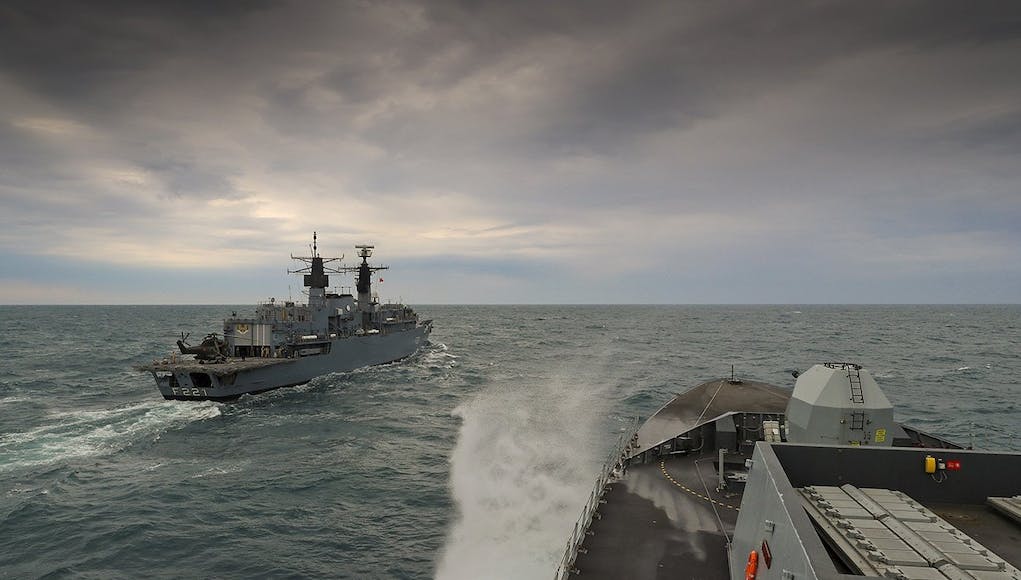 Share
Facebook
Twitter
Pinterest
WhatsApp
Email
Standing NATO Maritime Group One (SNMG1) is conducting several days of naval exercises with the Polish Navy in the Baltic Sea this week.
SNMG1 routinely patrols in the Baltic Sea providing regular opportunities to enhance interoperability among Allies.
Since January, SNMG1 has trained with a number of allied counterparts in the Baltic Region, including Poland, Germany, Lithuania, and Latvia and now Poland has organised a second Passing Exercise.
“The SNMG1 units, my staff and I are looking forward to participating in this training opportunity. The Polish Navy has pulled out a lot of resources to set up a complex scenario and are providing surface and air forces,” said Commodore Søren Thinggaard Larsen, Commander of SNMG1.
The exercise will include a number of basic and advanced maritime operations, from facing asymmetrical threats to warfare against surface ships, helicopters and fighter aircraft, as well as performing a simulated joint search and rescue operation.
“With both European ships as well as a Canadian frigate, the presence of SNMG1 in the Baltic is a tangible sign of the transatlantic ties in NATO. Every exercise we conduct with the regional allies enhances our ability to work together across nations. In NATO we are ready, as one, and we are stronger together,” said Commodore Larsen.
The Polish 3rd Ship Flotilla out of Gdynia is sending two air-defence frigates, two corvettes, an anti-submarine corvette, a fast attack craft, a tanker and auxiliary vessels. Air patrols will be provided by the An-28 B1R patrol reconnaissance aircraft, Kaman SH-2G on-board helicopter and the W-3 WARM rescue helicopter from the Naval Aviation Brigade. Further participants are Su-22, MIG-29 and F-16 aircraft from the Polish Air Force.

I thought that was a T22 at first! Looks similar?

Mmm that’s what I thought,curiousity got the better of me , looks like it sure is -Regele Ferdinand F221 ex HMS Coventry.

Something else to bear in mind when people compare escort numbers. Ours are operated from new.
Many others are not.

The Batch 2 T22’s seemed to have very short careers with the Royal Navy,aside from the usual cost and personel issues were there any problems with these ? They were quite large with room for upgrades and improvements I would have thought.

Lol we corrected at same time.

The 4 Batch 3s did. Original T22 batch 1s and batch 2s had no main gun. Just 4 exocet canisters and Seawolf forward, plus another towards aft.

Lol indeed – I wonder if the new Type 26’s will follow a similar evolutionary path between batches too.

The photo must be from stock. In the Naval Today article, which is what this ukdj piece is based on, there are PHOTEX pictures of the actual ships.

Batch 2s had Outboard fitted and a whole bunch of other sneaky beaky kit and operators onboard. The capabilities the batch 2s had for SIGINT both to intercept and monitor signals for intelligence was scarily good. Hanger was 2x Lynx capable and frequently carried 2 helos on deployments. One being a bog standard lynx the other usually had all of the optional extras fitted …and that was a lot of optional extras! Outboard ESM, 2050 Active sonar, a 2031 tail and a very very large air weapons mag meant they where designed to hunt and kill subs whilst on there… Read more »

Is the CESM kit fitted aboard the T45’s the direct replacement for the Intel capability?

That’s fine. I’m pleased the capability has not been lost.